Civilization’s almost total dependence on diminishing fossil-fuel resources is destroying our planet and must be changed quickly. The gasifier-boiler that this proposal aims to build, based on 38 years of R&D, will be capable of both producing high quality steam at 650 degrees and 800 psi for steam power production, and generating higher quality syngas than any other model on the market. This internal double-functionality is unique to this machine, and would be achieved as easily as turning two dampers. This residential-size gasifier/boiler will convert locally available waste biomass material from forestry, agricultural, processing industries and municipal waste streams, much of which is now a costly disposal problem, into valuable decentralized energy utilizing existing I.C. and prototyped steam engines. This integrated system can convert a greater variety of feedstock, size and moisture content at higher efficiencies than currently existing technologies. Such efficient decentralized energy production has the potential to greatly assist local energy self reliance, create local employment, keep energy dollars in the community and convert costly landfill waste disposal into valuable energy generation.

According to a new study, forest biomass could replace as much as 28% of the liquid fossil fuel now being used for industrial and commercial heating in the Northeastern US. In the Pacific Northwest alone, about one quad (1,000 trillion BTUs) of biomass residues are physically generated each year. This is equivalent to 160 million barrels of oil, or $22 billion per year in residential fuel oil. It represents the heat equivalent of 1½ times the annual electric power consumption of the Pacific Northwest. This scenario is repeated across the nation and around the world.

This project is of high economic and symbolic significance to Open Source Ecology. Symbolically it will be a major milestone- once incorporated into an energy system with the steam engine- of reaching fossil fuel independence by sourcing local biomass as an energy source. The biochar byproduct from this process will serve to enhance the fertility of the Factor e Farm (FeF), in contrast to the poisoning effect that the use of fossil fuels have on our world. Maybe even more significant will be the economic effect, as FeF will soon be able to produce its own biomass and energy from free solar inputs, leaving only labor costs (which are typically low at FeF, and can be reduced with the completion of a microcombine).

Even more significant could be the retail prospects for this project. Following the model being adopted for the CEB, the energy system could be produced on site and sold around the country to fund further FeF projects. While the CEB has a considerable market, it is a more specialized use, compared with the demand for (particularly green) energy. Production costs can reasonably be considered to be low since the gasifier requires no complex external components, and much of the first-run costs come from molds and testing equipment, which are one-time costs.

This proposal aims to accomplish the design phase of a residential-size steam boiler fueled with wood, agricultural waste, pellets, wood chips, corn cobs and other biomass fuels, able to operate on natural convection flow or fan. It will be capable of producing superheated steam to efficiently generate residential-scale power. This unit will also operate as a stand-alone gasifier, generating woodgas of a quality for running an I.C. engine or other gas-fueled appliances, such as refrigerator, cookstove, foundry kiln, etc. Size will heat an insulated building of about 3000sq.ft.

Over a four week period from the signing of the proposed contract, deliverables will include:

Note that the below images are of a version of the proposed gasifier which is adapted to hot water heating, and the outside heat exchanger will be subject to complete redesign to accommodate steam generation.

Configuration will include gasifier fuel hopper with combustion chamber and heat-exchanger modules integrated into one unit. Gasifier will include manual grate adjustment and rotation for ash-separation at coal-bed, ash-collection with manual removal, and manual air-intake dampers for gasifier and combustor. Steam at 650 degrees and up to 800 psi will be produced inside a steam-tube heat exchanger (HX) whose exact specifications will be determined in the course of this design, receiving input from experts in the field (Tom Kimmel and others).

This gasifier is unique in several ways and I have found nothing on the market similar, so this list is for rough comparison.

This design has the potential for scaling both up and down, with the smallest size suitable for a small cabin or mobile home. Many variations in design for different applications and fuels will be suggested, from a fully-automated home energy system to a basic gasifier for mobile transportation application.

See below diagram to orient description

(Note that this diagram shows the spiral heat exchanger on the outside, which will be replaced to accommodate steam pressures)

From here the hot gas enters the Heat Exchanger. In these diagrams the heat exchanger is optimized for hot water production, and so this part of the design will change to be better suited to output superheated steam for steam power generation. This article will be updated as soon as it is completed. 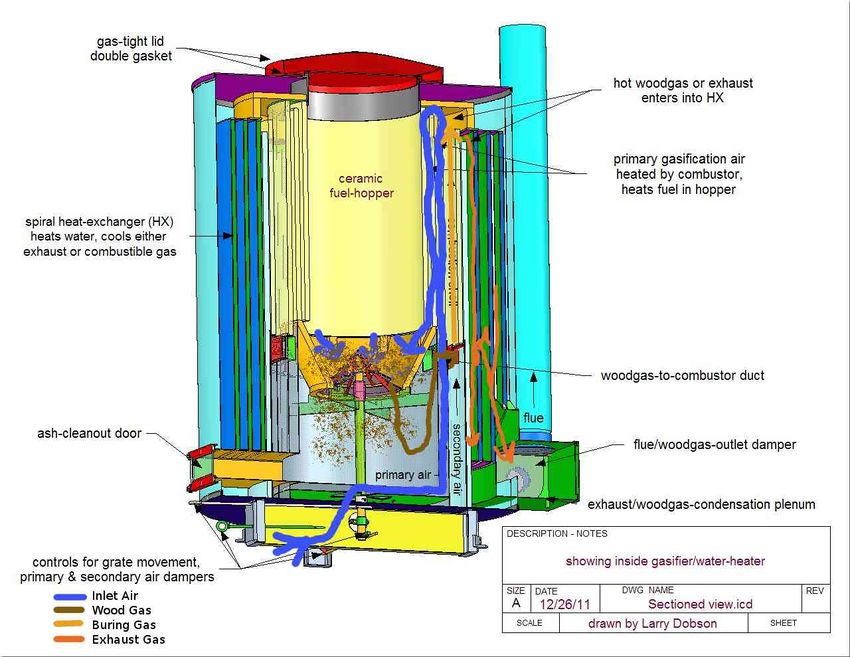 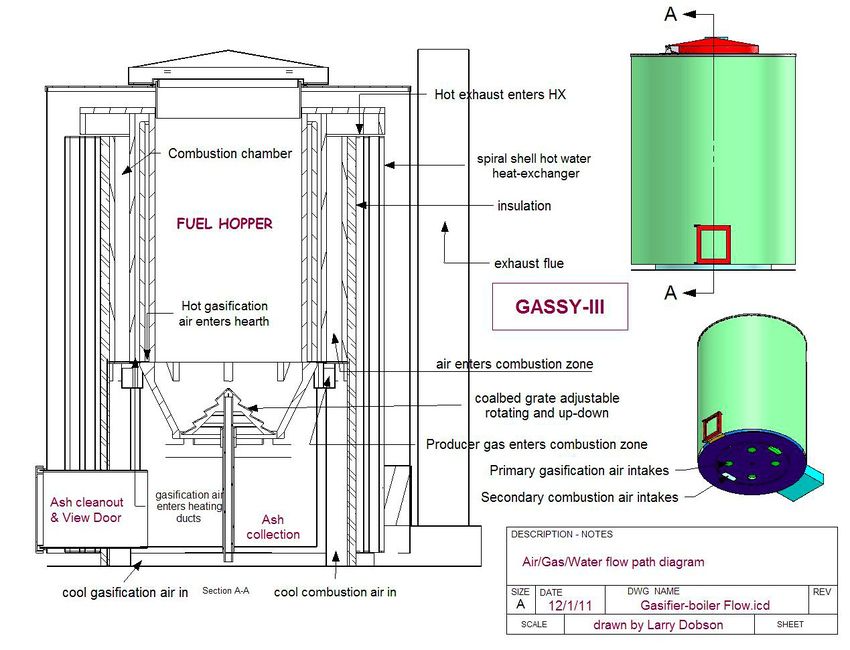 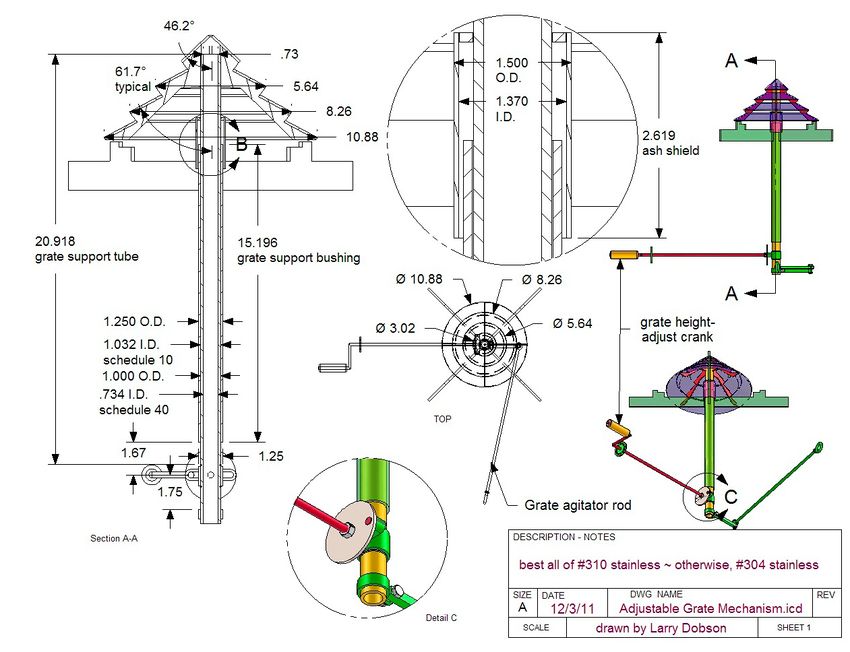 The gasifier is started similar to a normal woodstove, with crumpled paper and dry kindling loaded into the hopper first, lit with the induction fan on low, then the main fuel is loaded on top of this. Alternatively, with fuel already in the hopper, crumpled paper is stuffed into the ash-door and lit, the induction fan is started, then propane gas is introduced through the central grate pipe until the fuel is burning well. 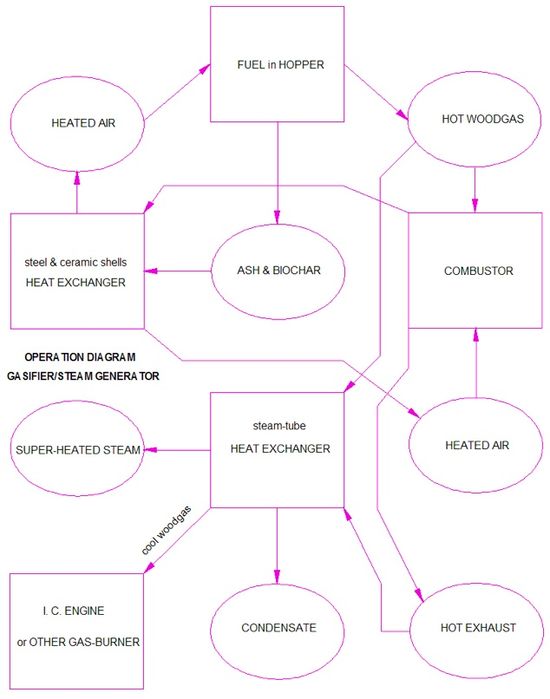 This energy system is designed in three modules that can be replaced or utilized with other modules for other functions, the gasifier hopper and air preheat assembly; the ash-collection, air distribution and control section; and the heat-exchanger section. Because biomass and waste gasification is such a complex process with so many variables, this prototype is designed to demonstrate the highest potential in variety of usable fuels; high efficiency from intense air-preheating and strict utilization of thermodynamic design principles; and integration of components in a feedback system that is far more than the sum of its parts. It is designed as a platform of excellence from which to develop a whole new set of spin-off energy technologies, such as simpler fuel-specific gasifiers & heaters, a steam-engine or Stirling-engine or thermovoltaic-cell power-source, low-tech, low-cost gasifiers and ovens made from local materials, light-weight mobile gasifiers for I.C. vehicle fuel, and as a heat-source for kilns, forges, glass-furnaces, foundries, thermo-refrigeration systems, etc.. Future improvements will incorporate electronic control design and circuitry being developed as another GVCS project.

A major advantage of this energy system is its unique versatility, being able to produce either high quality steam, or low temperature heat as well as woodgas fuel. Another is the ubiquitous free fuel source, which replaces fossil-fuel with decentralized local waste materials, thereby creating local energy, local investment, local jobs, local control.

This project will be pursued at the inventor’s location on Whidbey Island, WA, while his assistant, Alex Briggs, will support remotely by working on background research, economic analyses, and coordinating between the wishes of OSE and the designs being developed, to ensure timely and comprehensive design.

My normal consulting, designing and building fee has been $40 to $100/hr on past projects. While I had originally proposed a $40 labor fee, since this seems to be a low-budget, not-for-profit, out-to-improve-the-world organization, I have lowered my rate to $15/hr, which I really need to meet my expenses. If more labor is necessary than projected, then I will be putting in more hours for the same income. Been there, done that. The plasma-cutting shop and metal shop where the prototype will be built charge a very low fee for their services, compared with other facilities I have used in the past. This represents a significant savings on the project. Although I have sourced most of the hardware components from specific companies, I have found cheaper sources and will continue to look for lower-cost or higher-quality products and sources as I order components.

The amount requested for this proposal, to complete the design phase, is: $1125 over 4 weeks

Success of this stage of the project will be the timely delivery of a complete design, economic analysis, and a further viable proposal for the construction of the design for a price acceptable to Open Source Ecology and the Shuttleworth Foundation.

Since the proposed deliverables are virtual, the design is already substantially completed, and in light of Larry Dobson's extensive experience in the field, failure to complete the detailed design in the allotted time seems unlikely. Should unforeseeable delays occur, however, the design will be completed as soon as possible under the full motivation of both Alex Briggs and Larry Dobson.