This project is intended to be a Distributive Enterprise which allows for a cloud-based 3D printing service. Payment is included in this service. 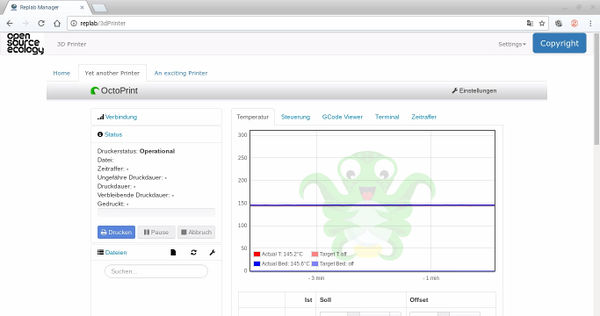 To Chris Rupp - I'm working on the print cluster - and it appears that Octoprint does not support SD card printing, but only streaming from the Raspberry Pi. I have not found any source showing how to use an SD card to store the print file - it appears that the standard route is streaming from the Pi to the 3D printer. Is that so, or am I mistaken?

This is important because, say we have 6 printers connected to a Raspberry Pi - we don't want 6 of them to fail if the Pi crashes. We need to have this designed such that each printer is running from its own SD card - and can finish a print job even if the server fails. This limits failure modes to only power outages on the 3D printer itself - which is also addressable in the future.

I am exploring different possible configurations - and am questioning our prior route because of the issue in this email. -MJ

If I remember correctly, this should be possible, however it was not tested on my part so far. This issue here suggests that its possible https://github.com/foosel/OctoPrint/issues/1216 However, I don't have the gui here, so I cannot assure how exactly it should be done... So maybe just look around the options, it seems like you can upload it to a printer and then send the command to print it

No problem yet with failed Linux servers, but server failure (which will happen from time to time) is a point that we want to eliminate by design. I'm thinking when thousands of people will be using our system. So that only single printers can fail, not entire batches of printers.

I did some more research - and it appears that transferring files to SD without taking out the SD card is painfully slow:

It appears that the only solution is then to break the cluster into parts. So that we limit the number of 3D printers per Pi. Maybe 2-4 printers per pi in a 100 printer cluster.

It would be nice if we could send the print file over to the SD card of RAMPS. Then a single Pi could control an unlimited number of printers: it would just send the file over to SD, and then that instance of Octoprint can be shut down.