150-Strong: A Pathway to a Different Future (Rob O’Grady) 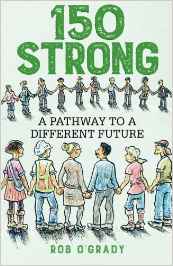 From the website: "A very specific proposal is made with respect to the Rule of 150, based on Dunbar's Number, which originates in evolutionary biology (150 is the approximate number of people with whom any individual is able to sustain stable and meaningful relationships). On a personal level, it is suggested that the Rule of 150 is a principle that we can use to make our lives more resilient, fulfilling and meaningful, irrespective of what happens on a larger scale. And, on a big picture level it is suggested that the Rule of 150 is an organising principle by which we might be able to shift the pivot of our society, such that a new decision making context can emerge.

We all share a future with many challenges. The economic, environmental and social systems that sustain us are stressed, and an inevitable period of "the unfolding of consequences" is approaching. The headlines we read on climate change, wealth inequality, geopolitical instability and precarious financial arrangements, represent the realisation of structural flaws inherent in our current system, and it seems that there is little we can do to address these issues within the confines of our existing political and economic arrangements."

Rob O'Grady is an engineer, father of three, and regular citizen who has been stirred to action by his reflections on environmental issues and his everyday encounters with the perversity of our current system.

Trained in the discipline of "sustainability engineering", he discerned early in his career that to talk of sustainability in the world of business and politics was "to pour from the empty in to the void," because the underlying context is subversive of such efforts.

Rejecting a career dealing in irreconcilable contradictions, he went into the construction industry and helped to build a thriving company that employs some 150 people. But he continued to think about environmental and economic issues. Having never come across an approachable account, that, to his mind, adequately addresses the intractability of our current situation, he set to writing.

He took an engineer's approach - working from first principles, drawing on real-world experiences, and understanding the need to keep things simple and practical - and found, to his surprise that the germ of a solution emerged. This book is the culmination of a journey that started as a vote of no confidence in our current system, and ended in a fledgling hope that a better future might be possible.