Agave for Biomass and Biofuel 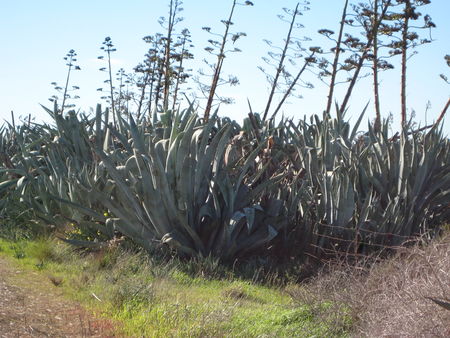 Energy demands worldwide will not be met by fossil fuels alone in the future because there is a limited supply of these fuels and atmospheric pollution associated with the fossil fuel industry is no longer acceptable. There is an emerging biofuel industry that will partially offset the need for fossil fuels, but there are a number of unknown environmental and economic consequences associated with land use for bioenergy production. If bioenergy feedstocks can be grown on marginal and semi-arid lands that are not ideal for food crops, there is less risk of indirect land use change that threatens sensitive ecosystems. Plants which use crassulacean acid metabolism (CAM), which include the cacti and Agaves, are of particular interest since they can survive for many months without water and when water is available they use it with an efficiency that can be more than 10 times that of other plants, such as maize, sorghum, miscanthus and switchgrass. CAM species include no major current or potential food crops; they have however for centuries been cultivated for alcoholic beverages and low-lignin fibres. They may therefore also be ideal for producing biofuels on land unsuited for food production.

In México, there are active research programs and stakeholders investigating Agave spp. as a bioenergy feedstock. The unique physiology of this genus has been exploited historically for the sake of fibers and alcoholic beverages, and there is a wealth of knowledge in the country of México about the life history, genetics, and cultivation of Agave. The State of Jalisco is the denomination of origin of Agave tequilana Weber var. azul, a cultivar primarily used for the production of tequila that has been widely researched to optimize yields. Other cultivars of Agave tequilana are grown throughout México, along with the Agave fourcroydes Lem., or henequen, which is an important source of fiber that has traditionally been used for making ropes. The high sugar content of Agave tequilana may be valuable for liquid fuel production, while the high lignin content of Agave fourcroydes may be valuable for power generation through combustion. Along with Agave species described above, some other economically important species include A. salmiana, A. angustiana, A. americana, and A. sisalana. Agave sisalana is not produced in México, but has been an important crop in regions of Africa and Australia. Information collected here could thus be relevant to semi-arid regions around the world.