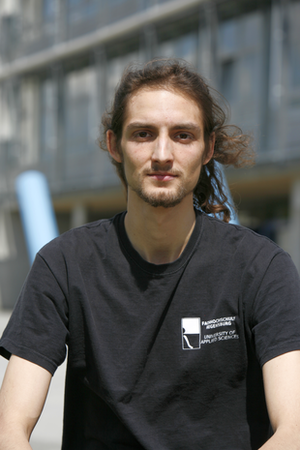 Political/Social:
2006 - 2010 head of students council, doing political work and establishing a strong influence of students on major university topics as well as organizing some conferences
2008/2009 Established the Campusfest in Regensburg
since 2008 working on private permaculture project in Altmugl (little overview: http://pekoson.net/mugl.html [german])
since 2009 establishing planraum in Regensburg: OpenSpace, including Hackerspace, ecological topics as well as artist works

Of course, what a question. The future is open and free.

We have started a project called planraum in Regensburg. This Project is a very widely defined project to unify ecologic ideas, arts and technology. In the first part by creating a physical room like a hackerspace to create a melting pot where the ideas can spawn. As second part there is the subproject wurzelwerk and the associated Farm where a technology based community will try to reform the rural economics. This project is very in the beginning, but as there is plenty of land and some buildings availabe it could emerge to something like a factor e farm in Germany. The project is in the very beginning and the planned arrival of people in this place is in 2012 or 2013. Yeah, and we're interessted in contributing to the mill-drill-lathe as we have some people experienced on this topic in our group. So actually I am interessted in collaborating as you share my visions, perhaps you would say, I share your vision. However, OSE rocks.

There is this idea, that societies fail due to there complexity. Complexity in the sense of always larger specialisation of individuals in the society as well as further vertical differentiation (Tainter summary in German: http://uharc.net/wiki/collapse ) leads to an always lower net benefit when introducing more complexity to the system. This leads to loads of social difficulties, problems and if not cured perhaps to collapse. I do not believe that there exists the immediate chance for collapse in the western world, but we have to reduce complexity by keeping the benefits whereever we can. And there enters relocalisation and redistribution of the means of production the stage (and with this OSE), as it is one of the most natural and best proven ideas to create resilient communities with low complexity and high output. If OSE is used as foundation for this thinking we can overcome loads of the present day problems in the world, in the developed as well as in the developing world

I think nothing. At the moment other projects are developing, and sooner or later I will grow in the shoes which are made for me, but don't fit yet.

Perhaps I haven't found it yet, but while building up new means of production there also should be an social scientific assessment of the whole project to get an idea of the real impact of local production.
More social scientific assessment perhaps, as there lie also big dangers in widespread means of total production (of course the current system has also large dangers). But perhaps this dangers should be reviewed.
More women, as I think a solely male community is quite unhealthy

Organizational/Communications: Worked in political as well as non political student organisations in leading positions, organized some conferences and established a festival
Agriculture/Permaculture: Grew up on a small industrial Farm. Having my own permaculture project running.
Education: worked with difficult children, held some lectures on Computer Scientific and Mathematical Topics.
Mathematics: Studied it, actually still studying it
Unix System Administration, Programming etc.: Doing it all the time

Very much I'm interested in creating a OSE fabrication and research site somewhere in middle Europe, as well as building up a team of professionals. As I am associated with a university of applied sciences I also want to distribute some the the design and research to bachelor as well as master students in the areas of computer sciences, mechanical engineering as well as electrical engineering.
I'm very interested in bioplastics and we are developing a method to gain Polyactid Acid.

Of course, it depends on the work. I'm volunteering all the time I'm not working.

No, not at the moment.

I think we can build everything on our own.

Not as long I'm involved in so much other projects.

When I can make a live of it.

Of course. I want to have them all

Yes I am interested, but there's loads to do in the old world Bold text