I am developing a network solution to reduce latency issues when accessing project-critical resources online.

I am developing a plan for using Reddit to promote involvement in OSE.

Today, I'm coordinating Marcin's AmA on Reddit. I have already begun promoting it here. I will be using the following image to provide proof.

I began planning Marcin's IAmA. It is tentatively scheduled for Friday, April 4, but I have asked Marcin to move it up a day to Thursday. As of this moment I am awaiting his response on the matter. I put together the description that will be used for visitors to the AmA. File:AMADescription.odt

I updated the OSE Subreddit with a number of links on the sidebar. I am going to begin posting content to the subreddit on a regular basis in an attempt to revitalize the community. The content will be gathered from the OSE blog, wiki, facebook page, and website, and will be used to promote the work being done by the organization.

I added some basic diagrams of the logical design for my network solution for OSE. I also began adding a list of major obstacles facing this project.

I began work on a solution to OSE's network woes. My next step is to plan the logical layout of the network. This will give me a much better understanding of hardware needs and how the wireless networks will be set up.

I updated the OSE Internet page with the changes I made to the network while I was there, and emailed Marcin with the administration details for the network devices being used at Factor e Farm. From my work, I have discovered a method that could be used to provide a WiFi network to all locations and structures around the farm. I have begun researching how this could be deployed.

Blue Broadband has a package that offers 6 Mbps for $125

This is all I can find for wireless internet services at the farm, and there are no other options for wired broadband.

KC Freedom Network is looking to grow a mesh network in Kansas City. It is still a very small project, but offers some potential for the future. Building a mesh network from KC would have some major challenges, and would require as many as 10 nodes to reach FeF.

It appears that getting faster speeds is not likely in the near future. This means the focus needs to be on making things more accessible over the LAN rather than relying on outside internet services.

I spent the morning working on setting up a wireless bridge between the internet connection in the hut and the hab lab. I reconfigured the CenturyLink router/modem in the hut to release DHCP information every six hours to reduce the number of reserved addresses. It appears the router was trying to connect through the bridge using the address 192.168.0.254 which was already reserved on the Century Link modem by another device. It is likely that a specific IP address would need to be reserved for the TP-Link router on the Century Link modem.

I had issues getting the Tp-Link router set up as either a bridge or repeater and it was not appearing on the MAC access list of the Century Link modem in the hut. My suspision is the Linksys router is not properly relaying DHCP information between the Century Link modem and the TP-Link Router, but I don't have sufficient time availible to troubleshoot this issue further. Additionally, I'm not very familiar with the Tomato firmware that is installed on the device so I would need to research more about its operation in order to be capable of said troubleshooting. Currently, the TP-Link router is set to attempt a bridge to the HabLab network and to provide a LAN named HabLab2.

Update I managed to configure the Linksys router to operate only as a switch and access point. The TP-Link router finally received an IP address from the Century Link router and I was able to communicate across their WiFi connection to the Internet. 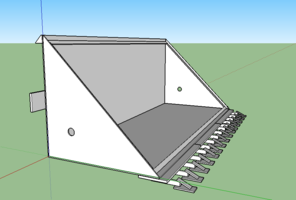 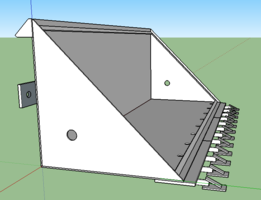 Soil Mixer: I added a finger mount, lower mounting brackets, and began work on teeth for the front of the bucket. File:SoilMixer.skp

I started designing the bucket for the soil mixer. File:SoilMixer.skp