Links and information for using CEB's.

Soil mixture plays a big part on what your blocks look like and how they act after compression. In my limited experience I have had blocks come out good (our 1st 2), completely fall apart (the next 4 using different dirt), loafed (they rose like bread), crumbly, cracking and almost perfect. The first batch that came out was using some store bought dirt from Home Depot. Which looked like this:

These blocks were just left outside with no special treatment and are still solid to this day. About 1 month old and has seen a little bit of rain and watering from the hose.

A day or so later, I took more of that same soil after it had thoroughly dried out out and put it into the machine. These blocks literally fell apart as soon as they came out. Lesson learned: You need moisture.

Next up I tried just taking some dirt from our property and compressing it. I filled up a bucket, added some water for moisture and mixed it up. Those blocks came out looking really good. However they feel apart when I picked them up. Lesson learned: Don't use top soil with lots of organic mass.

After that I got some black clay soil from a friend and mixed in some sand. These blocks came out looking pretty good. However, the cracked pretty intensely the next day. Lesson learned: Use less clay.

Next up, Dan Schellenberg from www.propagelleprojects.blogspot.com come out with a few folks from around the world to see the machine and try some of his soil mixed with 5% cement. These blocks came out looking pretty good too, but they were loafing a bit. This was the first time I had really seen this issue and not sure why it was occurring. It was later brought to my attention that the press foot inside the compression chamber may be flexing during the brick ejection phase. I've only seen this issue with this series of blocks.

My next venture was to try out my local quarries sandy loam. After I spoke with the quarry foreman, he directed me to their smaller quarry for the sandy loam they had there. It had a higher clay content and he felt would be more suitable. I think I hit the sweet spot here.

However after a mass run of blocks, I started having cracking.

I figured I had too much clay or silt so I got a few buckets of sharp sand and mixed it in at 25%. It yielded the following.

Rather frustrating isn't it? Seems we had too much sand now. So the problem at this point was I either had too much clay and was cracking or too much sand and they were crumbly. So I went back to just the default sandy loam and did a little researching. What I found was that the sandy loam was a really good mixture and I just needed to slow down the drying process to prevent the cracks. I also found out that cracks are totally acceptable when it comes to building codes. Here are my latest blocks: 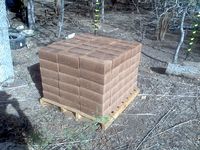 After 2 days of curing

This run was using our local road base. It had too much large aggregate and not enough of the caliche. It was rather clumpy and the blocks came out a bit crumbly. They may have done better with some time to dry, but we got rain unexpectedly that night.

I will continue to experiment, but feel confident in using these to build with.

Guide for determining your soil and getting the right mixture: PDF guide

CEB Manual of Design and Construction

28 Dec 2011 Note: The above two links are dead. Maybe they are duplicates of GTZ manuals on CEB technology: Volume I, Manual of Production and Volume II, Manual of Design and Construction

This video is a decent reference for some questions that may arise from new CEB builders. Floyd Hagerman commenting on a partial wall build at Factor E Farm, Fall 2011: 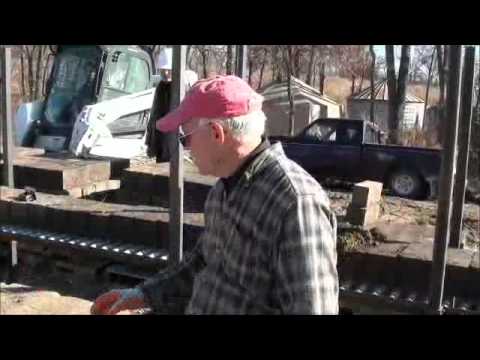