The is the main page for version 4 of the CEB Press. See that page for general info and how it fits into the GVCS.

This is the development version. If you're helping with development, or would like to, this is the version you want. See the "Research and Development" link above for details.

Prototype 4 was built in a Collaborative Production Run. 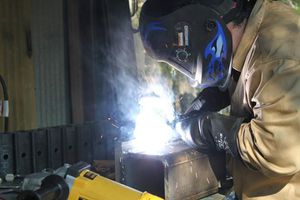 James Slades' first independent replication of the CEB Press in process as of Sep. 2, 2011. Welding the soil loading drawer.

In Oct 2013, James Slade said, "We haven't tested the roller system on it as far as I know to see how durable it is under constant load. However, far as I can tell the rest of it should work as the design didn't change much (from version 3) other than a simpler materials list. Again, it hasn't gone through a thorough testing phase yet so I caution against counting on it as reliable until that has been done. I simply ran out of time when I was there to run it through all the phases of testing other than to verify it worked with the automation controls."

The CEB documentation is being actively upgraded to meet Fabrication_Procedure_Standards with the goal of serving as a reference implementation for GVCS documentation.

See http://blog.opensourceecology.org/2012/10/collaborative-production-run-video-compressed-eerth-brick-press/ for video and links to all documentation for The Liberator IV - Open Source CEB Press, Prototype IV.

This version of the press builds Version 3 and makes improvements towards greater ease of use and quicker fabrication. The top ten most substantial improvements are as follows: