This is the automatic height levelling version based on the new TorchHeightCTRL_V.02 pcb. (All Sources on GitHub: [[1]])

The new pcb is an all-in-one board, that adds some peripheral interfaces to the application, like for endstop or a future direct user interface (Display).

In the automated version the 0mm-distance / start-position should be found automatically by homing. From this it will take a sample and then goes to 30mm height and take another sample for calibration. Then it will go into a loop and trying to balance the distance around a pre-set default-value of 15mm. But if you then push the button of the jogwheel you switch from autobalancing- into manual-mode and change this 15mm-default-value by turning the jogwheel. Pushing again switches back into autobalancing mode. 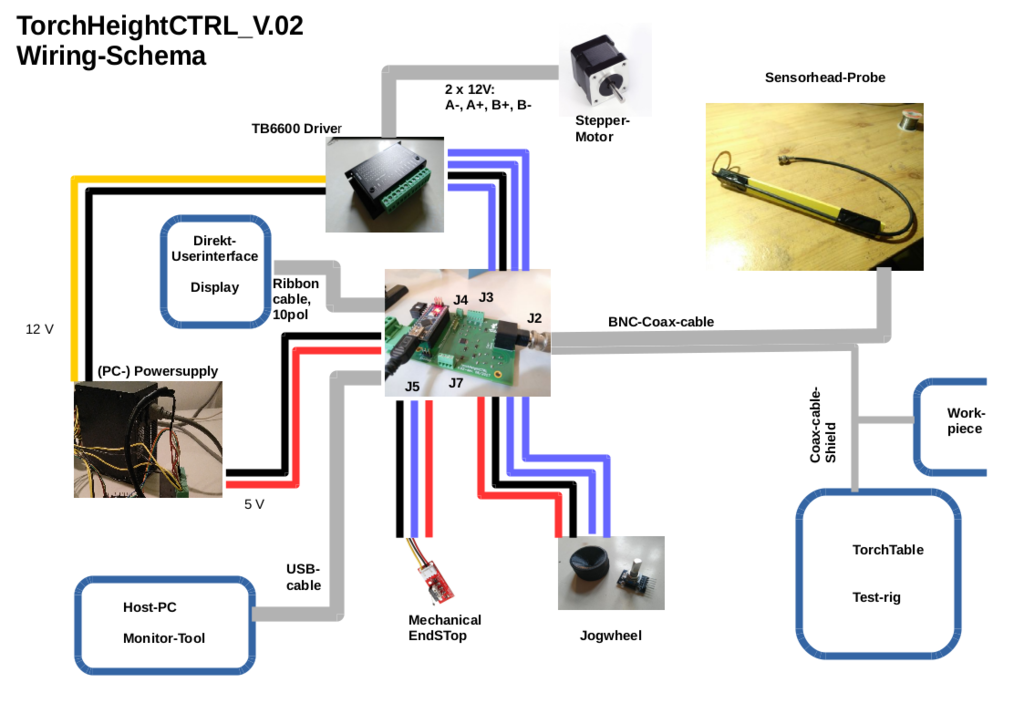 Warning: The phoenix-contact powersupply connector has NOT the same configuration than the connector of the same type on RAMPS-boards !!!

Dont use the plug of a powersupply that was previously configured for use with a RAMPS-board and has 2 x 12V. The TorchHeightCTRL_V02 board has 1 x 5V and 1 x 12V and will be blown immedately if you give 12V to the 5V line !!!

The TB6600 gets connected to J3 on the TorchHeightCTRL_V.02 pcb.

The power lines should be connected directly with a 12V line of the powersuplly, as mentioned above.

The Rotary Eccoder pins GND, 5V, DT and CLK get connected with J7 on the pcb. If you turn the pcb that you can read the labl "J7 Jog" in the right orientation the pins on J7 are (from left to right): 5V, GND, DT, CLK.

There is one more pin on the KY-040, labelled as "SW". This is a button-press-funktion. Unfortunately the pcb-design was initially intended for another type of rotary encoder, which had not this function, so its not incorporated in the original design. But there is however a workaround (without soldering) for now. The SW pin must be connected to one pin of the ICSP-port on top of the Arduino Nano. (Note: This pin is also part of the UEXT-port, which is not used now. But later we should replace it with another free pin, e.g. pin D9.)

The mechanical EndStop gets connected to J5 on the PCB. The Pinout of J5 is (from left to right): GND, DATA, 5V. (Note that some commercial EndStops may have a different pinout ! You then have to reconfigure the DuPont-connector.)

The SensorHead-Probe gets connected with a coaxial cable with BNC-connector, where the Sensing-Ring is connected to the inner wire. You can get an impression on how the probe is made from the video at [16].

For getting reasonable signal quality, its important to connect the metal-plate (your workpiece) and also the metal-parts of the test-rig with the SHIELD-ground from the sensor-probe. This is the internal shield-pin of the AD7747 and this is NOT (!!!) identical with the overall GND of the pcb. Therefore it is connected seperately. (Note: In a possible next generation/iteration of the pcb there should become definitely an extra screw-terminal connector with about 3 or 4 SHIELD-ground pins implemented.)

The arduino firmware is kept as small and simple as possible and should therefore be easily adoptable to daily needs - whatever may turnout to be useful in the future practical work with the torchtable. But from here and as a starting point the programm-logic suggest a workflow, that is based on two modi:

When the program starts, there is an initiation phase used for the individual calibration of each run, like:

Then the Mainloop starts, in the manual mode. Height is not changed, unless you turn the wheel. If you do so, you can re-adjust the working height to a new level, higher or deeper.

If you press the Jogwheel down (like a button) you generally switch between the both modes. If you are currently in the manual mode, you will enter the auto-balancing mode (and vice versa).

The autobalancing runs in a loop (until the jogwheel will be pressed again):

There are several places in the sourcecode, where filters and algorithms can be applied, either to achieve a better signal-quality, or influence the "behavior" of the overall-workflow, e.g. like the sensivity. You can define a certain range (e.g. plus or minus 2 aF) in which you consider an deviations as artifcats and dont react with a move. Otherwise you would never have a calm position but instead a jitter of doing permanently correction moves, even if the height of the underlying workpiece doesnt have changed. More about this on the discussion page [18].

Serial output by USB-cable. This can be used for debugging while development, or in normal use transmit current capacitance-data to a host-monitoring programm on your desktop PC, that samples and visualizes graphically the height-levels of the run.

It is also planned to communicate to a direct user interface (OLED keypad) by (software) I2C.

See how to load the pcb sources from Github and into Kicad (using OSE Linux (or others)) on this instructional youtube-video: https://www.youtube.com/watch?v=v-nhG5vuZW0

The single steps are:

This is a simple POC-version that allows a manual adjustment of the Z height by turning a jog wheel (see demonstration video on youtube: [23]). The wheel can be 3d-printed [24] and is connected to a rotary encoder of type KY-040.

With this rig it should be possible to manually operate the torch table height by following its slowly moving and regulate the height personally. This can be useful even if in the full version there is a capacitive sensor doing automatically that task, but one may use it then for setting the starting height or use it in other applications where a frequent manual control is an appreciated option.

The rotary encoder gives up to 20 pulses per revolution to an Arduino-Mega, which translates it into a number of motor steps and triggers these by a TB6600-based stepper-driver. A RAMPS 1.4 may act as a connection layer on top of the Arduino, but can also be omitted. We will show here which pins to wire on the Arduino and on the Ramps as well.

The firmware consist only of a few lines of Arduino-code, which makes it easy to extend and modify.

There are 3 kind of connections:

The KY-040 RotaryEncoder has 5 Lines: GND, +5V, SW, DT, CLK. Connect these either to the AUX2 port of the Ramps, or directly to the corresponding digital I/O ports on the Arduino-Mega.

TB6600 to Ramps/Arduino, Motor and Power

Make a bridge between ENA- and DIR-, together with a second bridge from DIR- to PUL-. The PUL- contains a second cable which goes towards GND on the Ramps Extruder E0 port. So in total there are 4 wires going either to the Ramps or directly to the Arduino-Mega:

In the case of a bipolar stepper motor with 4 wires two of them are the ends of one coil. Connect them like this:

Connect these to a power-supply which can deliver at least 5A. The TB6600 stepper driver is rated for up to 4A and 9-36V DC. That means you can instead of 12V also connect 24V or more towards it.