The objective is a waterproof, corrosion-resistant, chemical-resistant, impact-resistant, redeployable device that mounts onto the material surrounding a hole and allows electrical transmission through that hole.

The hole connector applies tension with an elastic, fine contact material on the cross-sectional perimeter of a transmission line that passes through the hole.

The hole connector is made with a double-end male thread with an inner diameter(hydraulic nipple). A nut and O-ring are used to mount and seal one threaded end to the case wall's hole. A sealing tube, pressure frame, and compression nut are mounted on to other threaded end in order to hold and seal the cable. 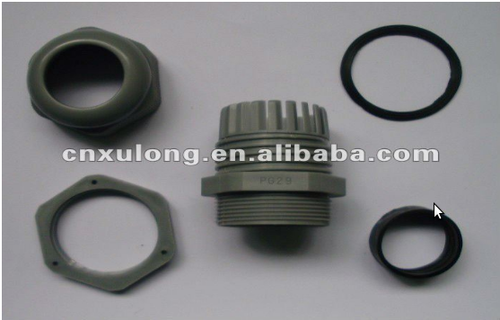 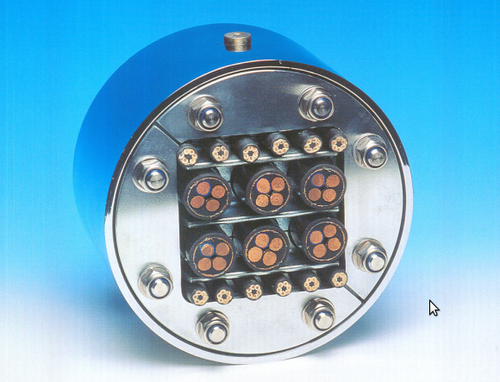 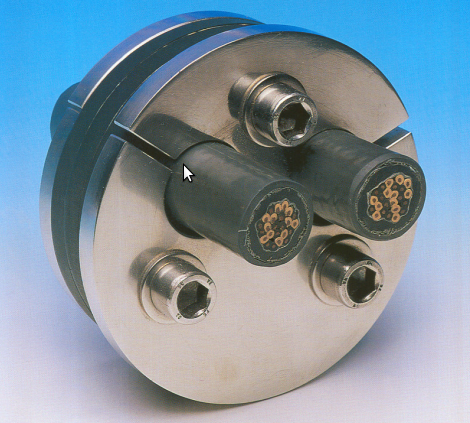 Until recent years, the problem of penetrating a pressure bulkhead with an electric cable was a simple matter, as the pressure differential was never more than a few hundred pounds per square inch. Simple packed glands were developed which served adequately at the low pressures involved, but, as the pressure differential became higher, the limitations of the simple gland became apparent. With the advent of the submarine-cable repeater, a new approach to the problem resulted in a single-core gland capable of with standing the greatest depths. The basic technique of this new approach has now been applied to multicore cables and multiway glands, and a range of glands has been developed which is being used almost exclusively by the UK Ministry of Defence (Navy) in British submarines. For oceanographic-instrumentation capsules, these glands have been tested over long periods at a pressure of 100001bf/in and are considered to be capable of withstanding the pressure on the floor of the Marianas Trench. The fundamental design of the gland is based on bonding polythene to metal and the use of polythene-insulated cables. All glands are factory- made and are tested to pressures in excess of the equivalent of the maximum usage depth; a portable moulding kit is used to join cables after installation. In many instances, a fully prefabricated cable harness has been used, wjth the assurance that on entering service the equipment is completely watertight. This method has been used to connect all the external electrical circuits in deep-diving and conventional RN submarines; it has also been applied to a number of oceanographic instruments.