The OS Car will be a lightweight and aerodynamic two passenger car that will be fueled with ethanol biodiesel. The current plan is for the car to have a reverse trike configuration: two front wheels and one rear wheel which is the only driven wheel. The two main benefits of the reverse trike design are lower cost and weight due to one less wheel, and lower wind drag due to the highly tapered rear portion of the vehicle. The construction of the car will be a steel space frame covered with non-structural polymer or composite panels. The proposed powertrain is a hybrid hydraulic system which includes a single cylinder engine that runs a hydraulic pump which directly powers a hydraulic wheel motor used to drive the car and which compresses a gas in an accumulator to store energy. Gas in the accumulator will also be compressed via regenerative braking when the hydraulic motor is run in reverse to slow the car down. Cost control and quick development will be maintained by using donor vehicle parts and off-the-shelf parts. Components that cannot be easily manufactured such as brake calipers, steering knuckles, and rims will be sourced from a donor vehicle and components such as instruments, wiring, seats will be off-the-shelf components.

As the car design matures, some components from donor vehicles and off-the-shelf components can be replaced by scratch-built open source components. Also, forks can be made from the original car design for variants such a four or five passenger car, or perhaps a car with a hybrid electric powertrain.

Some vehicles found so far that are similar to the Open Source Car concept:

The OS Car powertrain will be a Hybrid Hydraulic System, making it a hybrid hydraulic vehicle (HHV). A hybrid hydraulic system was chosen over a hybrid electric system to avoid the weight of numerous lead-acid batteries or the cost of lithium-ion batteries. Since one of the objectives of the OS Car will be a long range, i.e, the capability to travel perhaps over a thousand miles without stopping to refuel or otherwise obtain more stored energy, the potential plug-in capability of a hybrid electric powertrain is not heavily valued. The basic hydraulic design for the OS Car is being modelled after the one described in Hybrid Hydraulic Drive Thesis. Here's a rough diagram of the hybrid hydraulic powertrain: 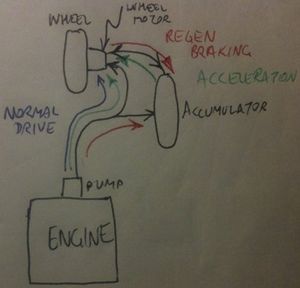 One basic objective of the OS Car project is to exploit modularity in the powertrain design. That is, as many components as possible in the OS Car powertrain will be shared with power delivery systems on other GVCS machines. This plan is for the following powertrain components to be modularized:

The current plan is for the car to be a reverse trike with two wheels up front and one wheel in back. The benefits to a reverse trike are: less weight due to one less wheel, less variable cost due to one less wheel, and better aerodynamics due to the tapered rear end that can be achieved. Federal regulation requirements are much less onerous for a three-wheeled car than a conventional car which allows for a much lower cost to develop the vehicle. Many state regulations might also be avoided since many/most states treat a three-wheeled vehicle as a motorcycle (Need to research this.) Using a three-wheel design would allow for the back wheel to be directly driven which would obviate a differential, shafts, etc. See the Aptera for an example of a car with a shape that fully exploits the reverse trike configuration: www.aptera.com.

The frame should be a space frame, probably composed mostly of 4130 or cheaper steel tubes. Round tubing is probably better than square or rectangular tubing for most of the vehicle since race experience has shown that it is less likely to yield which makes vehicle ride more consistent over time.

The current plan is to use most of the running gear: tires, wheels, brake rotors, brake calipers, steering knuckles, steering rack from an NA Mazda Miata donor car on the OS Car.

We need to decide whether the car has front or rear wheel steering. I favor front wheel steering because it will make design of the car easier and probably cheaper because it will allow for more off-the-shelf parts to be used. I also think that front wheel steering will allow for better collision avoidance since, unlike rear wheel steering, it would not cause the rear of the car to initially move toward an object which a driver is trying to avoid. Handling at high speeds and extreme manoeuvres is probably also worse with front steering if the the info here en.wikipedia.org/wiki/Steering#Rear_wheel_steering applies to reverse trike vehicles.

Front: An unequal length double A-arm suspension will be used to achieve optimal control. The current plan is to use rotors, wheel hubs, and steering knuckles from a NA Mazda Miata for the front wheels. The Miata is a the best donor vehicle candidate that I found for front suspension parts because it's a rear wheel drive vehicle like the OS Car will be, the suspension has an unequal length double A-arm design which is optimal for performance, and because the hubs have a 4 x 100 mm stud pattern which allows for a wide array of choices for rims and tires.

Rear: The current plan is to use the swing arm, spring and shock absorber from a motorcycle. An automobile wheel is preferred over a motorcycle wheel but it's unknown at this point how practical it would be to mate one to the motorcycle parts. I'm currently leaning toward a Goldwing as a donor because an older donor can be found for a good price and because they have shaft drives which are quieter and require less maintenance than belt or chain drives. --Crank 17:04, 13 June 2011 (PDT)

The current plans is to use 15 inch wheels with a 100x4 bolt pattern, probably from the NA Miata donor vehicle.

An example of the varying sizes of vehicles that could be produced with the same basic components: