This document lists D3D Printer Design decisions and reasoning behind them in chronological order. The intention is to make the process as debuggable as possible and facilitate later creation of formal documents such as Design Decision Tree and Conceptual Design diagrams. It follows the D3D_Design_Methodology.

NOTE: We started out this process with concept creation. This deviates from the D3D Design Methodology, but we document it here nontheless.

D3D_Printer_Design#Functional_Requirement nr 1 is that the printer should be buildable in one day, and a parallelizable build is highly desired. A random Youtube search around modularity in CNC machines led to discovering the concept of modular linear actuators, as shown by Alexander Stepanenko in a video. These kind of actuators are sometimes called "linear stages" and are sold as ready-built units[1][2]. The concept would allow

Normally, we would reason here around advantages that the concept of modular linear actuators could provide, but OSE found its potential exciting enough to put it directly into D3D_Printer_Design#Functional_Requirements.

Instead of diving into stepwise definition of interface and linear actuator, we decided to grab the following low-hanging fruit: 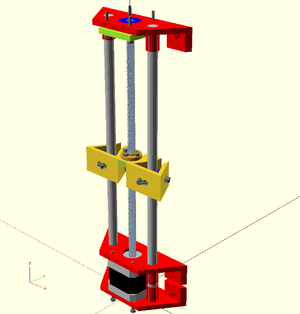 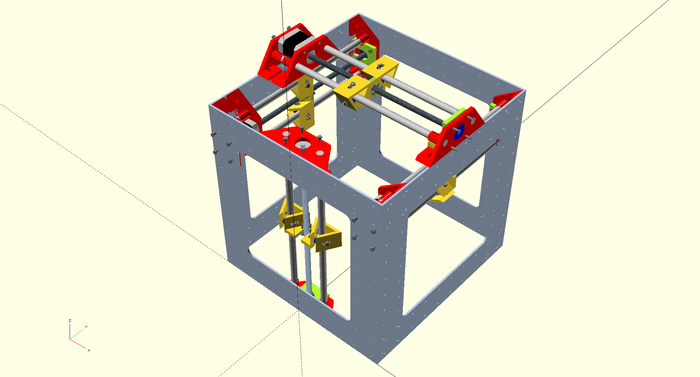 Vermont Rapid Prototyping's Jon in mail: "I have been using my Aluminatus heavily for the 2 years or so that I've had it, and it continues to perform very well. I like the linear bearings and lead screws a lot."

The linear actuator will have to meet following circa-requirements to be realistic:

Torque from rotational inertia is not included in the table because inertia of the threaded rod is tiny (order of 10^-7 kg m^2). Newton's second law gives maximum force needed:

Let's do some more pessimistic assumptions: lead screw efficiency at 20 %, skewed weight distribution of Y-axis gives double max weight: 1.3 kg. Accelerations of 9 m/s^2. This gives a force of 58.5 N and a torque of 20.5 Ncm, which is still within stepper motor limits at max speed (70 mm/s) for three of the four tested Nema17 stepper motor models tested here.

We conclude that a linear actuator based on a lead screw and a Nema17 stepper motor seems realizable.

Some lead screws are already mounted on stepper motors[8][9]. This improves ease of build. Most of them are 8mm diameter with 8mm travel per revoultion. This would lead to challenges as it forces stepper motors into > 300 rev/min-land.

Problem with Forces Along Lead Screw

Could we send bed probe signal through Z-leadscrew? Would avoid a wire and improve scalability.

The idea to use lead screws to make 3D printers easier to understand will not be unique to the D3D Printer. A company sell all-leadscrew drivem 3D-printers with the slogan "3D schreiber begreifen": [10]

The basic idea is that we can base all alignment on one single frame piece: 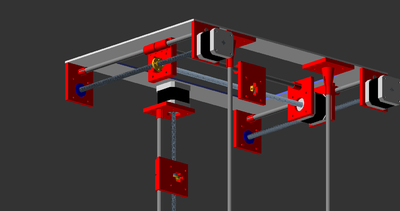 The concept doesn't handle gravity forces, but mounting along a wall, in strings or rubber bands from ceiling or below any four-legged table should be possible.

Stepper motors with leadscrew shafts of 8mm travel per revoultion was thrown together (on April 12, 2016) to test the concept: 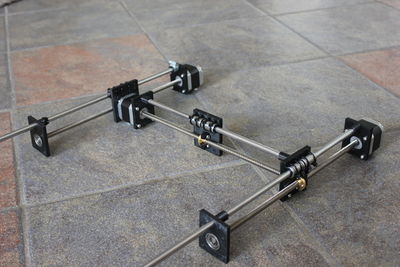 A 3D printer is a machine that synthesizes build material into 3D objects according to a series of pre-determined instructions.

We will assume that a mains voltage will power the 3D printer, with the constant shape: 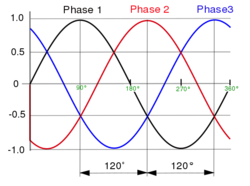 For the build material, we will assume filaments behaving roughly as thermoplastics with the constant shape: ...