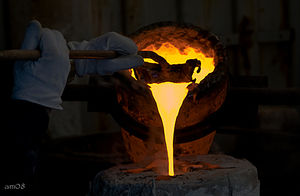 The digital 3D model is rendered in wax, then the lost wax technique is used to make the metal object. The process is used extensively in rapid prototyping, jewelry making and bronze sculpture art. Different options are available for turning the 3D model into a wax model: 1.) liquid wax is printed, or 2.) the object is carved/milled out of a solid wax block (subtractive), or 3.) a core of clay or metal is painted with multiple layers of wax using automated brushes, or heated artists knives.

There are some similarities between printing in wax and batik printing on cloth. The tool for applying the wax is a tjanting tool. Essentially what is needed is an automated and electrically heated tjanting tool. See the Wikipedia link on batik. The link is to the subsection on automation.

There is also a derivative process called lost foam casting where polystyrene foam replaces the wax in a casting. The foam is injection moulded and coated with slick clay and moulding material forming the mould. The metal boils the polystyrene off directly on contact. This is used in the casting of many engine parts and other large castings.

Since ABS is the plastic now used in Makerbot and other OS 3D printers is polystyrene with a Acrylonitrile and butadiene added for hardness then these 3d printers should be able to work with polystyrene alone. The result would be more fragile and softer and will need to be handled with care. However the result should make usable casting mould in two steps. No need to cook out the polystyrene in a kiln though that should still be possible. There will be a need to add a fume extractor when large objects are cast.

Most polystyrene is not recycled so its an abundant resource. However someone needs to make a plastics recycling unit that makes spooled filament.

I could have made this a separate page but its really just replacing the wax with a much cheaper plastic.