Once the camera has been connected & enabled the "raspistill" library, which should already be installed, is ready to start capturing photos. I created some simple bash script to capture some photos and videos, but you can generally run this from the command line by typing "raspistill -o image_title.jpeg". Refer to documentation from the previously mentioned link for more details.

Having trouble unzipping the raspbian-buster-lite.zip downloaded from the Raspbian.org download.

Turns out the archive download result is corrupted each time its downloaded. Ended up needing to download the zip file via torrent instead. After downloading and unzipping I was able to use balenaEtcherPro to flash the SD card.

Got the Pi loaded with Raspbian. Discovered we don't have a USB keyboard to do initial Pi configuration to allow solely touch screen input.

I self-assigned the task of designing the screen case/component. There doesn't seem to be much actionable progress in the Pi Working Doc to base plans on currently.

While chatting with the team in Belgium about some of the troubles they've had, the principles of single source of truth for project files, semantic versioning for product updates, champions for maintaining a product's source code/files/settings & expectations. This has been acknowledged as a meaningful opportunity for growth, while still keeping the end goal of allowing the open sourcing of the content to non-technical people.

We divided up the components to create the portable electrode welder. I worked on designing a handle to hold the assembly. While conceptually the design was perfect, I made an error on the inner diameter dimension of the handle.

Instead of using the outside diameter of the conduit (18 mm), which was intended to slide in the printed handle, I set the handle inner dimension to the conduit inner dimension (15.75 mm). The print (File:WeldingGrip.fcstd) worked, but we had to use the heat gun to soften the plastic enough to force the conduit down the handle slot. Since the clearance was so tight, I also had to abandon the bottom entry for the power wire because the heat gun softening used to create space for the conduit made me lose the inner channel for the wire to be fed through. Instead I just drilled a new hole above the side mounted set screw for the wire to enter and be compressed between the conduit and inner handle wall. This should be recreated to have the slot inner diameter be 18 mm.

Discovered that the Inkscape plugin was already installed on OSE Linux.

Discussed with Marcin that the plotter attachment requires removing the extrusion assembly, yet using the bed level sensor still. That seemed unnecessary. We talked about simply modifying the existing cooling+sensor assembly to include an additional slot to insert a ~.75" plotter attachment directly to the extrusion assembly, preventing the need to change out print heads. File:ExtrCoolSensPlt.fcstd

Inkscape has many setting to review when exporting (save as) to gcode. 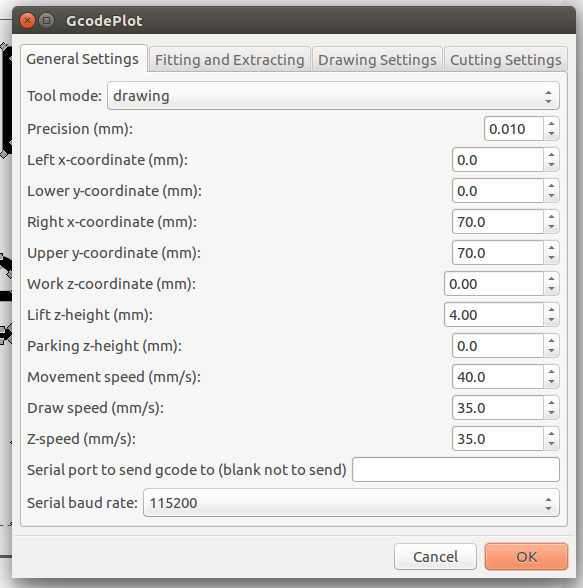 The notable ones I reviewed are as follows: - Precision setting should be set to 0.010 to correspond to the 10 microns of accuracy that the D3D printer is designed to achieve. - The left/right & upper/lower coordinate settings are very relevant to how the plotter arranges itself on the print bed. - Speed settings could be increased as high as 150 mm/s. NOTE: these speeds over-ride the speed settings which can manually be set on the marlin controller.

After much troubleshooting Discovered that the Filament diameter size in the slicer files was set too low, which caused the extrusion feeder to feed to much material. We incorrectly adjusted the M92 variable to E425 thinking that would adjust the steps/mm, yet that made the problem worse. After we discovered this, setting the diameter to the proper 2.85mm size and the M92 to E100 corrected the problem.

Separate from this issue, I've discovered that there may be a subtle misalignment in the filament pipeline which causes a problem in the extruder assembly to clog or jam.

There is an open source kanban board tool (https://wekan.github.io/) which already has a dockerfile for rapid easy deployment for local use or distributed use. This can be run on a RsPi as well.