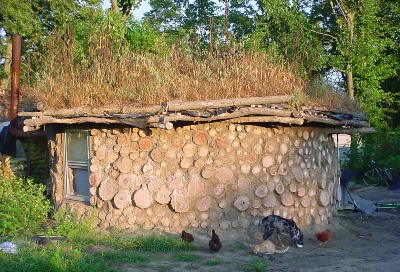 To give the walls a nearly smooth surface in preparation for final plaster. Final plaster does not perform well over gaps deeper than 1 inch or shallower than 1/4 inch. 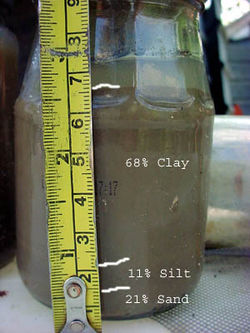 Stomped the crushed limestone and mud together 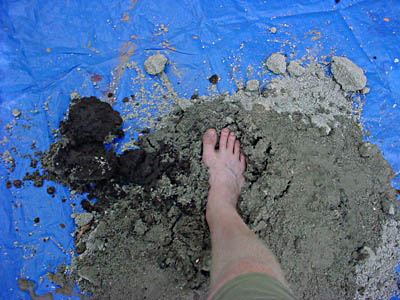 When the pile became flat like this, it was time to roll it over. 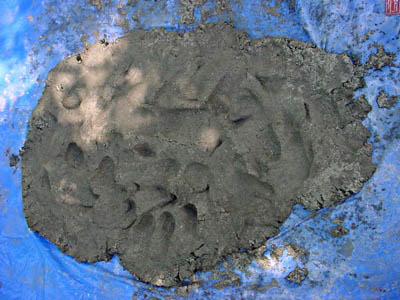 Rolled the pile by pulling the tarp 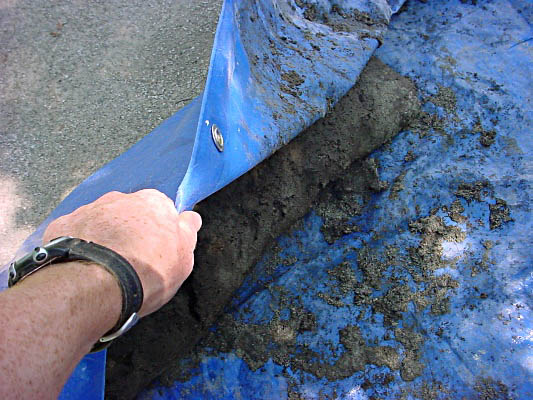 When the act of rolling produced a nice "burrito" shape, it seemed to coincide with the mixture being homogenous. 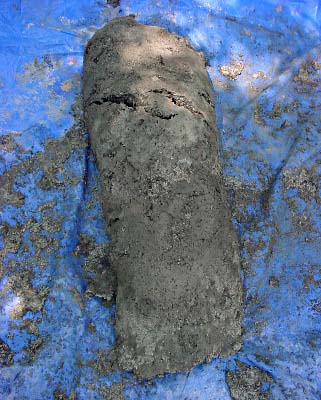 Added straw gradually as I continued to stomp and roll 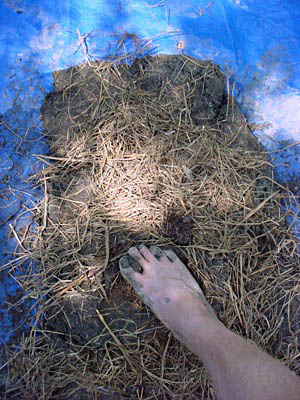 Note: I kept the mixture as dry as possible. But at one point I had to add some water because it got so hard that I couldn't stomp it

Determined which ends to keep visible (keepers) and which to bury

Scraped the keepers with a trowel 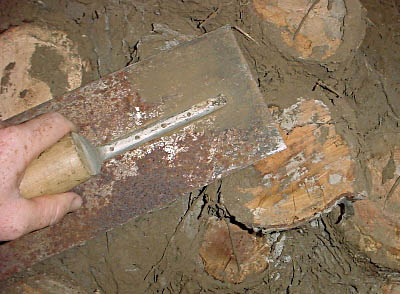 Brushed the keepers with a wire brush 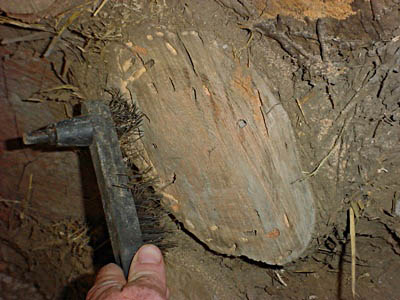 Oiled the keepers with linseed oil 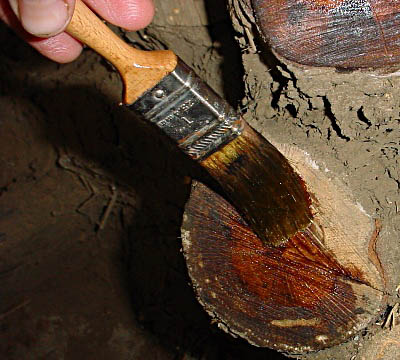 The motions necessary to work the plaster onto a vertical surface naturally leaves a smooth surface. I left dibbles in the surface of the plaster so that the final plaster will have plenty to grab onto. 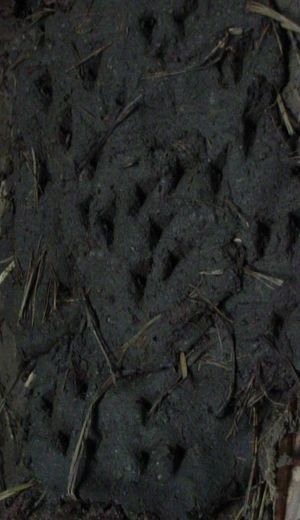 Select keepers well in advance and finish them with lacquer before attempting any rough plastering. Lacquer is better than oil because it protects wood against boring beetles, does not have to be re-applied every six months, and provides a smooth surface which is easier to clean. Dirty keepers are hard to clean and often too difficult to clean completely. Choosing the keepers and lacquering them before plastering could help with these issues.

In general, choose keepers based on how far they stick out. Keepers that protrude farther than the surrounding rounds are the easiest to plaster around.

Insect Protection and Fungal Decay - for extra longevity and if moisture can seep in from bottom, Borax or some other fungicide/pesticide may be an optional ingredient.

Rita Gatti,a second generation, professional woodcarver, suggests using a "flap wheel" to clean the ends, followed by a quick pass with a blow torch to burn off any sawdust and splinters.

Here are the ideal proportions for earth plaster according to "Serious Straw Bale" by Paul Lacinski and Michel Bergeron:

When doing research, keep in mind these terms which are all synonyms: cordwood, stackwood, stovewood, stackwall, log end.

Reading Suggestion: "Cordwood Building: The State of the Art" by Rob Roy, 2003. 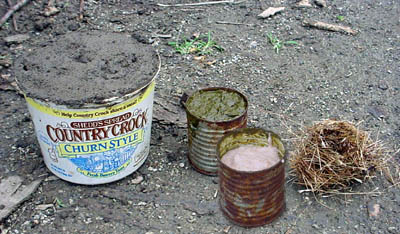 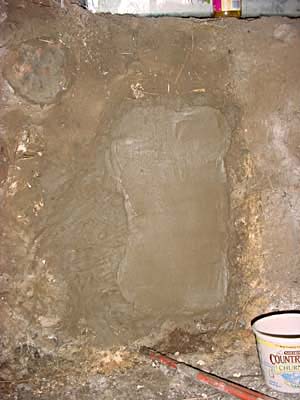 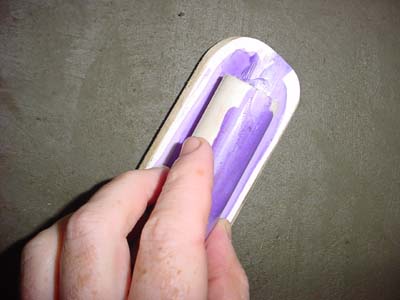 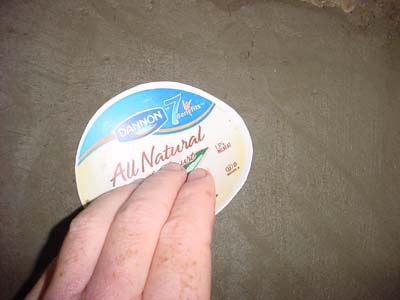 Major cracking after 36 hours - do not use this plaster. The cracks could be the result of not enough sand, too much water, or both. 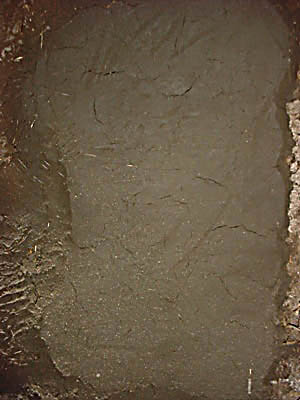 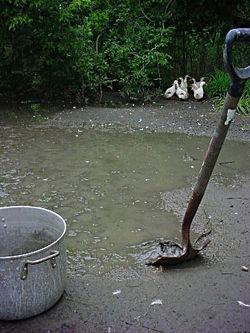 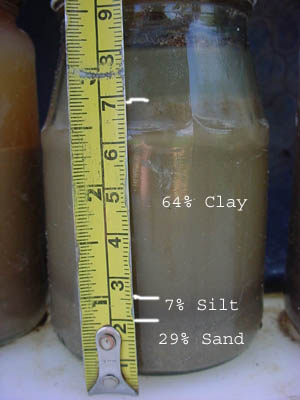 Same as before. Small cracking after 12 hours. Aborted. Best results is Attempt #2. 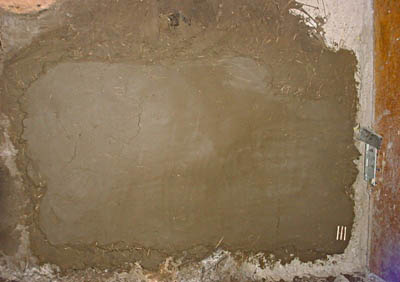 The two main objectives for this attempt were to find an even brighter colored plaster and to experiment with plastering around the ends of the cordwood. 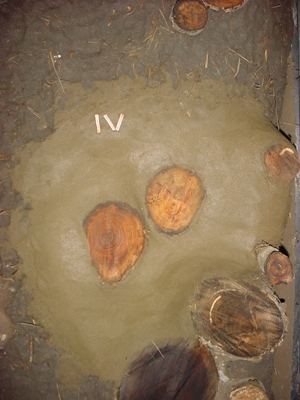 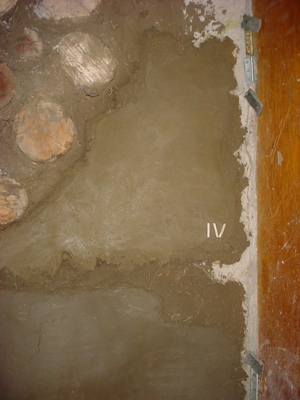 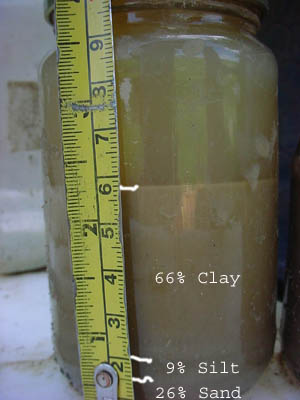