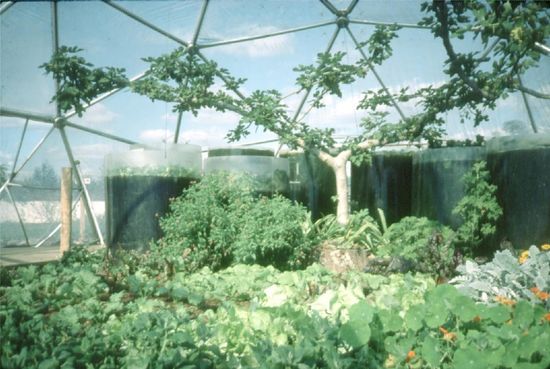 The Pillow Dome, built by Jay Baldwin in the early 1980s, pioneered the concept of using inflated pillows made of Tefzel in three layers. Argon was used as the inflating agent, leading to even better thermal insulation. The Ark housed a growing environment consisting of intensive organic gardens, irrigated by the "exhaust" from large, transparent tanks containing fish. The high, open interior space included tall fish pond (see aquaponics), a large fig tree, and vegetable beds. The tanks also served as an effective heat sink, allowing an indoor climate warm enough to grow bananas in February, in New England, with no fossil fuel heat source (for more information on the Pillow Dome, see links below). The Pillow Dome pioneered the technology that was later used in the Eden Project in Cornwall. 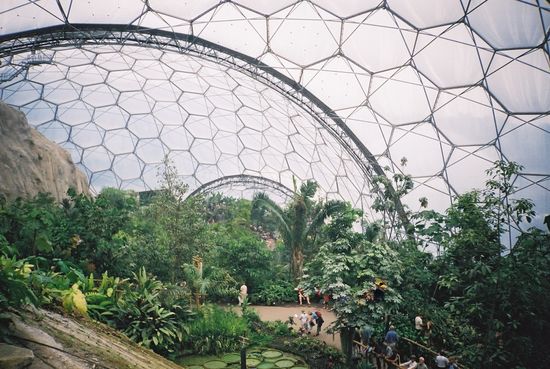 Inside the tropical Biome at Eden Project: The covered biomes are constructed from a tubular steel (hex-tri-hex) with mostly hexagonal external cladding panels made from the thermoplastic ETFE. Glass was avoided due to its weight and potential dangers. The cladding panels themselves are created from several layers of thin UV-transparent ETFE film, which are sealed around their perimeter and inflated to create a large cushion. The resulting cushion acts as a thermal blanket to the structure.

These are high-performance plastic materials such as PTFE ("Teflon") ETFE ("Tefzel"). They have very interesting properties such as UV resistance, elasticity, resistance to corrosion from most substances and very good high temperature performance. Fluoropolymer foil is useful as greenhouse covering and for Aluminum Extraction From Clays. The UV resistance of these materials results in long life, with up to 30 years reported with minimal degradation.

Also, UV transmission leads to a more "natural" light spectrum inside the greenhouse, suppressing microbes that may otherwise survive if UV light is blocked off. Fluoropolymers are slowly catching on as greenhouse covering but are still much more expensive than current alternatives such as polyethylene and polycarbonate. This may be due to lower overall production volume rather than inherently higher cost of the process. Drawbacks include high cost (10x that of polycarbonate), susceptibility to puncture holes and movement/wind, which is why fluoroplastic foil is often inflated as cushions (see images: "Pillow Dome" and "Eden Project"). Thicker membranes are possible but much more expensive.