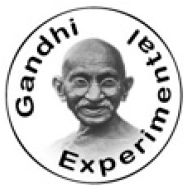 Question : Do you feel, Gandhiji, that mass production will raise the standard of living of the people?

I do not believe in it at all, there is a tremendous fallacy behind Mr. Ford's reasoning. Without simultaneous distribution on an equally mass scale, the production can result only in a great world tragedy.

Mass production takes no note of the real requirement of the consumer. If mass production were in itself a virtue, it should be capable of indefinite multiplication. But it can be definitely shown that mass production carries within it its own limitations. If all countries adopted the system of mass production, there would not be a big enough market for their products. Mass production must then come to a stop.

I would categorically state my conviction that the mania for mass production is responsible for the world crises. If there is production and distribution both in the respective areas where things are required, it is automatically regulated, and there is less chance for fraud, none for speculation.

Because while it is true that you will be producing things in innumerable areas, the power will come from one selected centre. That, in the end, I think, would be found to be disastrous. It would place such a limitless power in one human agency that I dread to think of it. The consequence, for instance, of such a control of power would be that I would be dependent on that power for light, water, even air, and so on. That, I think, would be terrible. ***

Question : Have you any idea as to what Europe and America should do to solve the problem presented by too much machinery?

You see, answered Gandhiji, that these nations are able to exploit the so-called weaker or unorganized races of the world. Once those races gain this elementary knowledge and decide that they are no more going to be exploited, they will simply be satisfied with what they can provide themselves. Mass production, then, at least where the vital necessities are concerned, will disappear.

Question : As a world organization?

Question : But even these races will require more and more goods as their needs multiply.

They will them produce for themselves. And when that happens, mass production, in the technical sense in which it is understood in the West, ceases.

Question : You mean to say it becomes local?

When production and consumption both become localized, the temptation to speed up production, indefinitely and at any price, disappears.

Question : If distribution could be equalized, would not mass production be sterilized of its evils?

No, The evil is inherent in the system. Distribution can be equalized when production is localized; in other words, when the distribution is simultaneous with production. Distribution will never be equal so long as you want to tap other markets of the world to dispose of your goods.

Question : Then, you do not envisage mass production as an ideal future of India ?

Oh yes, mass production, certainly, But not based on force. After all, the message of the spinning wheel is that. It is mass production, but mass production in people's own homes. If you multiply individual production to millions of times, would it not give you mass production on a tremendous scale? But I quite understand that your 'mass production' is a technical term for production by the fewest possible number through the aid of highly complicated machinery. I have said to myself that that is wrong. My machinery must be of the most elementary type which I can put in the homes of the millions. Under my system, again, it is labour which is the current coin, not metal. Any person who can use his labour has that coin, has wealth. He converts his labour into cloth, he converts his labour into grain. If he wants paraffin oil, which he cannot himself produce, he uses his surplus grain for getting the oil. It is exchange of labour on free, fair and equal terms-hence it is no robbery. You may object that this is a reversion to the primitive system of barter. But is not all international trade based on the barter system?

Concentration of production ad infinitum can only lead to unemployment.

Mass production through power-driven machinery, even when State-owned, will be of no avail. (16-5-1936)