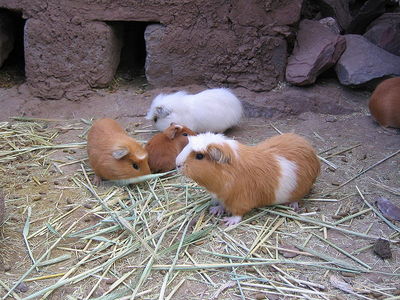 This page is to explore the advantages and disadvantages of breeding guinea pigs as a source of meat, as is common practice in Andean countries.

According to this, one male is needed per twelve females. Each female can produce 10-15 young a year. That means one male and twelve females for a yield of 120-180 guinea pigs a year. They can be eaten at age 3-4 months. Big ones can be a little over 1kg. There was a concerted effort in the 1990s to develop a bigger meatier variety called the Raza Peru

This guide says, "one pair of cavies could produce about 260 new pairs in 2 years". This says, "Most Andean households kept at least 20 cuys; at that level, using a balanced feeding system, Andean families could produce at least 12 pounds of meat per month without decreasing their flock" (that's about equal to one meal of meat a day).

Disadvantages: This says they're susceptible to all sorts of diseases and parasites, though this contradicts it.
There are small bones in the cuts, rather than big slabs of meat you can use.