Hexayurt at Strong Angel 3, San Diego, California. The large ball is an inflatable satellite dish (the parabolic dish is inside the ball) made by http://gatr.com 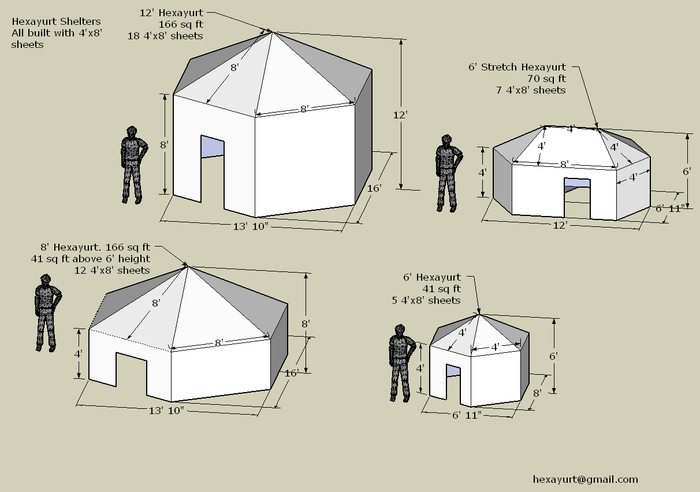 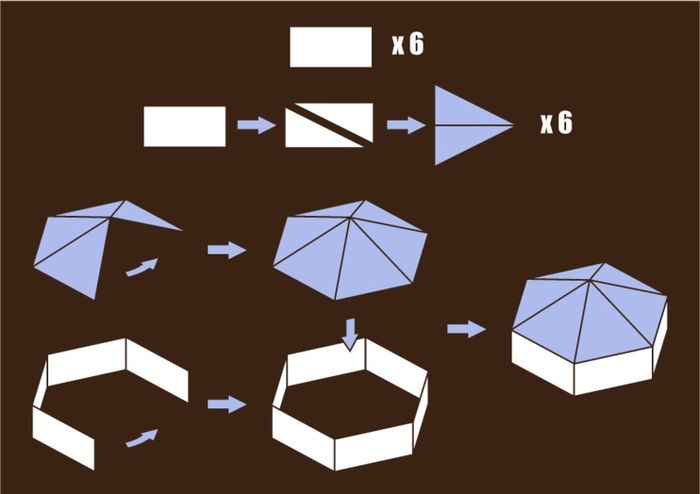 Look at the picture and go through the steps in your mind again. You get the boards and you get the tape. Then you cut some of the boards into triangles, and tape them together to make the roof, and then you tape the roof to the walls and you are done. You just built a Hexayurt. This is easy. You can do this. If we were working with index cards and sticky tape, you could make one right now on your desk. You know how this works now. You can do this. 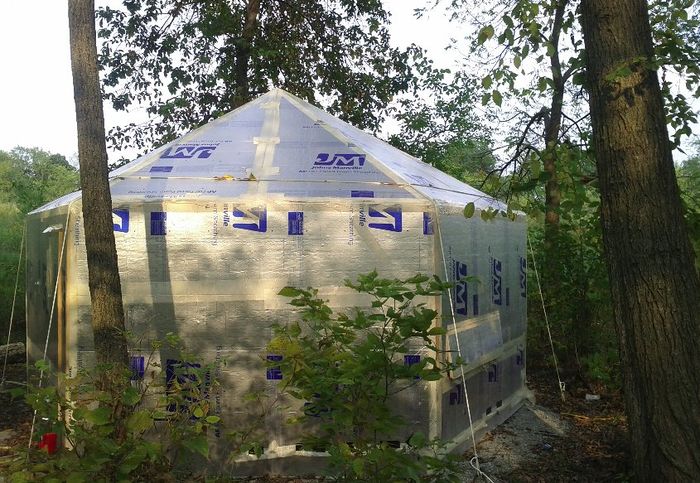 Hexayurt II, Built in July, 2012 by Vann Miller at Factor e Farm. Consistent with the nature of temporary shelter - he structure collapsed within a year due to windstorms.

This article is intended to provide a detailed description of the construction of the hexayurt so that the successes can be replicated and the few mistakes can be avoided.

The design applied at Factor E Farm as the Paul Newman Center for Temporary Housing (kind of kidding... Rob, call it what you like) was a perfect hexagon with 6' walls, 10' peak, and 14' foot width. It will comfortably house 3-4 people and should last about 10 years, given precautions taken. It is a tension structure, so that the building itself will give it structural support.

Rob, who has a history and family background in building construction, was quite skeptical of the structural integrity of the building. It proved to be excellent, and come together better than was thought.

The next step was to paint and tar the OSB boards. All of the OSB boards were painted on all edges, as OSB's weakness is moisture on the ends, which causes it to swell and rot. The paint applied on the edges, corners and such 3 inches in to the board should quell this.

Additionally, Tar was applied to the bottom edge of 6 of the OSB boards, about 4 inches in, so that high water would be deterred from any prolonged exposure to the boards.

We used open engineered technology for site prep! but any rototiller will do. We used the lifetrac with open rototiller to break up the soil, then we went through, measured everything out, ensured there was more than enough space for the walls, then pulled out roots, broke up clumps, and leveled it out with the rakes, and in the process stomped it down with our boots. We used a 2x4 and level to ensure the grade was correct.

Then, we dumped gravel at the assumed edges of the structure, measured it out, and then tamped it down at about 5-6 in wide by 3 in thick, leaving space for a door.

Also, make sure to clear the area from any meddling chickens. (Richard: One of them left a little gift for me on the ground that my hand discovered while making the wall panels)

After the paint and tar dries, the next step is to start cutting the boards. Because we decided on 6' walls instead of 8', we were able to eliminate 3 OSB boards from the materials list and cut 3 in half for the topmost board.

For speed, have one small team cutting and punching flashing while another team draws and cuts board.

With tar side down, attach 4'x8' OSB boards to 2'x4' boards, using the 2x4 with the long edge against the boards. Ensure that they are all flush, and that the 2x4 is evenly attached to both boards!

After this, attach flashing strip to one edge (left or right, doesnt matter, just keep it consistent throughout).

A trick Rob discovered with the flashing, to keep it flush as possible with the board, is to use the screw gun at an angle, pointing away towards the loose flashing end. It doesnt need to be an extreme angle, just enough to pull it taught when the head goes in.

When attaching any of the flashing, ensure that you are placing less than half (more like a third) of the width of the flashing on the 1st board. This will ensure a good amount will be left to attach to the other board, whether roof or wall, given that the angle between will take up some of that width.

Make a triangle with the panel pieces, screwing them into the 2x4 underneath evenly. Ensure that all is flush and that the bottom edge of the 2x4 is far enough away from the bottom edge of the panel to ensure that it wont get in the way when raising the roof. These 2x4s do not need to attach to the rest of the frame, as the roof is self supporting.

Then, like the wall panels, attach flashing consistently on one side, leaving width space for angle and attachment.

here is a link to photos and videos that were taken in 2008 when the first hexayurt was built at FeF: http://files.howtolivewiki.com/open_source_ecology_plywood_hexayurt_build/footage%20092708/?C=S;O=D

The hexayurt is still standing, but the osb pannels are begining to fall apart. The leather roof is still in very good shape. Additional windows were added for ventilation in the summer. The door has fallen off it's hinges. Never the less, i think with just a few additions to its design it could be a 10 year design, currently i think it is only a 5 year design. The current critical design successes are as follows:

the following are shortcommings at this point (5 years after build):

I also recommend the rocket stove book mentioned above, and have built some small "pocket rocket" designs to experiment with so far. Building the fancy version with cob thermal storage battery would be ideal for maintaining comfort, but probably time consuming enough for a dedicated project visit itself. The battery woodgas stoves look excellent for outdoor cooking on the go, but probably not much good for heating inside without draft ventilation. However, the new patio model would probably work great in a tipi by comparison.

Your results are perfectly consistent with any use of an uninsulated structure on exposed dirt in winter in Missouri, with a poorly functioning stove. Even 1" styrofoam boards on the ceiling, 1/2" styrofoam boards on the walls, and a plastic tarp on the floor would have helped you immensely. Also, the use of a rocket stove from Aprovecho in Oregon (plans available from them) or the very cheap woodgas stove that Vinay recommends on his website would have kept you warm without the extreme hassle with smoke and complicated chimneys that you suffered. Better luck this winter?

Your results are perfectly consistent with any use of an uninsulated structure on exposed dirt in winter in Missouri, with a poorly functioning stove. Even 1" styrofoam boards on the ceiling, 1/2" styrofoam boards on the walls, and a plastic tarp on the floor would have helped you immensely. Also, the use of a rocket stove from Aprovecho in Oregon (plans available from them) or the very cheap woodgas stove that Vinay recommends on his website would have kept you warm without the extreme hassle with smoke and complicated chimneys that you suffered. Better luck this winter?

Ah, yes, I'm not surprised than an uninsulated plywood structure was cold in winter. The Hexayurt geometry does not have decisive advantages in heat retention over other building shapes.

I tried living in the hexayurt for a little while, here are my thoughts. It was in November 2008. Weather was cold but not much rain or snow yet. Yurt was quite sturdy and kept the wind and water out, but was cold inside. Before Bob left we put the 55 gal. drum stove in and cut a hole in the side for the flue that had two bends. The stove was and is a difficulty, hard to light and very smoky. I slept on the futon mattress we had on the dirt floor of the yurt at the time. The floor was still kind of damp, I guess it was built when the ground was not entirely dry or water had gotten under the walls underground. In the morning it seemed very damp inside the yurt, which I think was from the damp ground. I don't know how it would be if it had a good stove. Nick took over the yurt when he came here. We moved the stove and had the flue go straight up to have a better thermal draw. With the stove going the yurt is pretty warm, but the door needs to be opened a lot to let the smoke out. It doesn't have insulation so it cools off quickly without a fire constantly going. The drum stove either burns out quickly and leaves the yurt cold in the morning or burns extremely hot and smoky all night making the yurt almost too hot and smoky to stay in. A good stove might leave it still pretty cold in the morning but it could be fired up easily and the temperature regulated better. Smoke still seems like a problem to me, even with a good stove in the cordwood hut.