In every project there are caveats that should be heeded and have been discovered by those who have attempted something similiar. When do-it-yourselfers pull a real boner and mess things up, it can be pretty embarrassing and their first response may be to gloss it over in their reports. However - especially in the case of Open Sourse work, where the idea is to help others be able to do the same project - our errors can be others' most valuable resource! On this page, we swallow our pride, report and analyze our errors, tell what we did for damage control and the results, and make strong recommendations for ways to avoid the mistake.

Well, as I understand it, the 'lab' part of the name indicates that it is a laboratory - a place where we experiment and learn. Here are some of the How Not To things we learned during this building experiment.

One problem led to another one:

We had a great plan for this - we would set our stakes out first to mark the hole edges at 4'x4', save the strings and move the stakes in by 6" to 3'x3' for setting the pad forms.

We wound up remeasuring and resetting most of the stakes for laying out the pad site grid.

So we've rewritten the foundation lay-out plans as they are currently posted. In the current version, we

We started setting the floor and wall forms and found that our East row of firmly-set-concrete column pads were sitting 3' further South than they should have been! Further observation determined that two entire East/West rows were affected by the error.

We decided that an emergency floor plan change we came up with should compensate for this without having to redo most of the column pads. So this is the layout we are actually working with now! 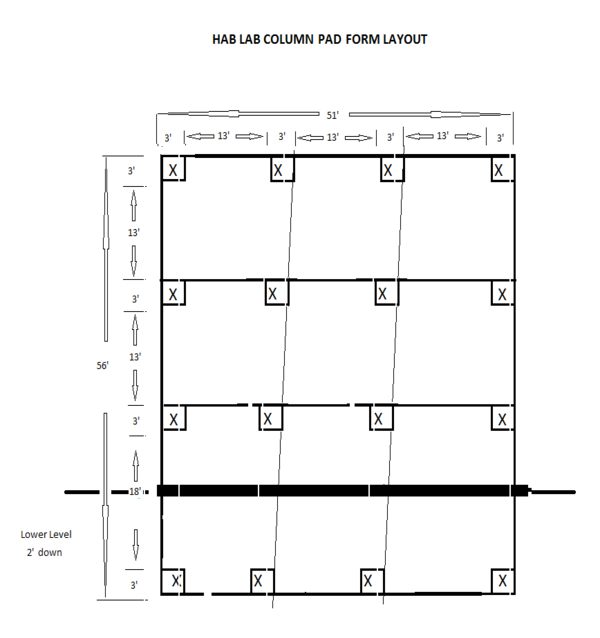 I don't recommend using this short cut, but if you do: