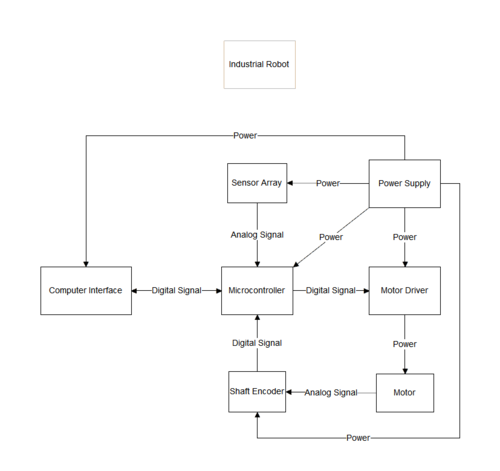 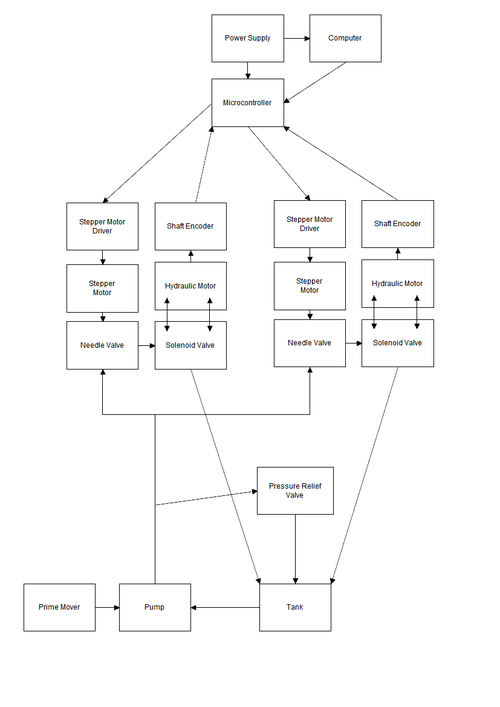 This is a diagram for the industrial robot with hydraulic drive, where 2 of the 6 motor systems are portrayed; note that this is rough and might be missing the answer to key concerns such as pressure regulation and additional safety valves, or using suboptimal design pieces, ex. using a servo instead of stepper motors might be better. Initially, the prime mover operates the hydraulic pump and the power supply energizes the computer and microcontroller (also the shaft encoder and motor drivers, but the lines are missing). At the robot's neutral position, the needle valves are closed, hence continuity of flow is maintained solely by the fluid moving through the pressure relief valve. When the computer outputs gcode, the microcontroller reads it then powers the solenoids to achieve a desired flow direction and issues digital signal commands to the motor drivers. The motor drivers respond to these signals by giving a corresponding electric current to the stepper motors; in turn, the stepper motors turn and opens the needle valve in discrete increments (steps), with which flow is controlled. Now the hydraulic fluid can enter through the needle valve and rotate the hydraulic motor either clockwise or counter-clockwise depending on the position of the solenoid valve. The shaft encoder then measures the rotation of the hydraulic motor shaft and sends this information to the microcontroller; the microcontroller responds by increasing or decreasing flow to the corresponding hydraulic motor (through motor driver then stepper motor then needle valve) in order to maintain a desirable actual speed of shaft rotation.