I have zero experience with pyrolysis. Since Marcin asked me to lead this project, I realized I'd need to know what I was talking about when I attempted to lure and retain more experienced Pyrolysis Collaborators.

I did not study anything or look at many designs before I began. I simply wanted to build a model and see what issues arise which others have experienced but don't really list in their experimental findings. Nor did I do any calculations of any sort. I winged it. If it blows up on me, I'll do more homework (call me Sir Francis as in Bacon: hopefully not burnt bacon). 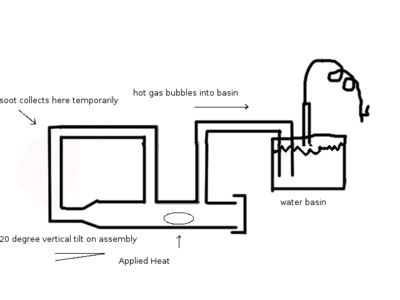 The overall conceptual goal is to get oil out of the cooling coils on the right side after inserting a biomass where the elliptical shape is in the pipe, sealing the pipe with teflon tape and a threaded cap, and heating the pipe directly under the biomass with MAPP gas for an undetermined amount of time.

The loop on the left side is a crude attempt at trying to trap soot for further burning by inclining the model 20 degrees on the left side. Should the gases ever reach laminar flow, convection along with laminar flow fluid dymanics: AV=AV (where A=cross sectional area the flow passes through, and V=the velocity of the fluid), may cause circulation in the loop.

If soot and cinder stay mostly to the left, then the outlet for the gases and the water in the water basin should stay cleaner.

The pressure inside the combustion chamber should be equal to the height of the column of water the outlet pipe is submerged under (15cm).

Photos of Manufacture and Assembly 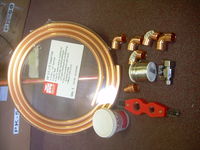 Missing from the parts above are:

Not shown in pictures is the MAPP gas canister and torch head. 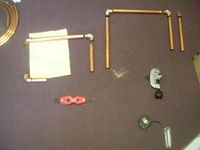 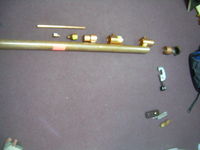 Obviously, these are not the parts I had intended. Being in a hurry, I made do with what the hardware store had in supply. 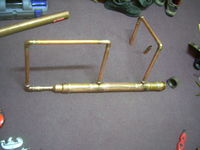 March 29th, 2009 Assembled All parts with the exception of:

No, the soldering doesn't look pretty and I didn't try to clean it up before I shot it either. It does hold air though. The hunt for a good water basin continues. 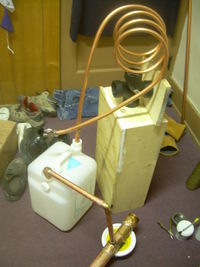 Thanks goes out to Danny Garcia and his son: their participation provided an indoors test during a small snow flurry, a laser thermometer to test temperature, and allowed for a quick change out of a leaking water basin.

Water basin had to be replaced as it had a leak.

SD memory left in laptop at home, only 10 pictures inside camera's memory: no cable to download from camera.

Left 1/4 turn valve closed in hopes gas would compress in water basin, then cool in cooling coil. Did not want gas to escape into enclosed area as this gas could be five parts H2.

Modeling clay sealed around the water basin lid openings of the cooling coil and the gas output pipe.

Middle of far left branch of loop 5 degrees cooler than top branch of loop: implies circulation in a counterclockwise direction. The loop of the pyrolysis chamber ran about 70 to 75 degrees F in an ambient temperature of about 59 to 61 degrees F.

Heated up burn chamber to around 340 degrees F before silver solder would begin to melt, then let cool down to about 130 degrees. Did this cycle five times. A MAPP gas torch was used to apply heat.

After unsealing pyrolysis chamber, found that water had been forced back into the pyrolysis burn chamber.

Very little of the wood had burned.

Wood was dry to the touch.

Poured all water into water basin, will let set over night in hope oil will collect on top of water.

When the copper cooled to 80 degrees F and the steel remained at 164 degrees F. Of course, specific heats bear this out: