Plasma Cutter design for the 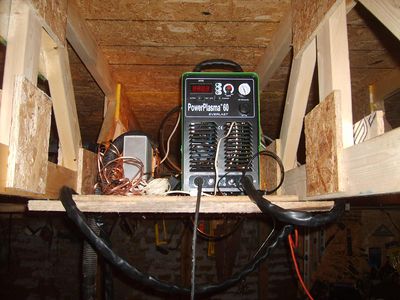 The plasma cutter is currently sitting right next to the motor controller. The plasma cutter case is grounded, but the connection is made with twisted copper housing wire which needs to be checked to make sure it is actually going to ground.

Noise from plasma tables can be a problem. You should sheild and ground the motor cabling to keep them from picking up noise and condcuting it back to the drive. Proper sheilding and grounding is really important for plasma systems.

From Mark at Everlast Forums

Running on a generator, could be a cause of some strange frequencies, depending on how "clean" the power is.

The HF generates the pilot arc. It sounds as if you are grounding the bolt on the back of the machine correctly.

But you hit upon the key: Shielding. I am not the expert on electronics or on shielding the electronics, but I can tell you that unshielded cables can be affected by the surge from the High Frequency. I think that Mike will weigh in on this. But I do think that the HF could be the real cause. It should be fixeable though.

From Wayne at Everlast Forums

You need to shield all motor controller cables and be sure the ground or drain is earth grounded on one side only. What type of motors are you using? Steppers, servo … Some of these motors require some high end wires with separated shielded twisted pairs and they run the motor power wires separately from the position feedback wires to reduce the possibility of problems. The generator may be causing the issue when it reacts to the surge demand thus causing a rapid fluctuation in power. Can you hook a recording meter or scope to it to monitor the output current and frequency? To further isolate the controls side of your system you may need to run a low cost one to one transformer on the incoming power side. I have used this method for servo driven systems when there seemed to be no other way to mitigate dirty power or outside interferences. Do you have any wiring diagrams or pictures of your system? Do you only get the feedback problem when the arc fires with the motion stationary and/or moving? Can you start the arc manually then power up the controls side to see if you have positive control after the start? Sounds like a great project you have going on here. Hope we can help. Wayne 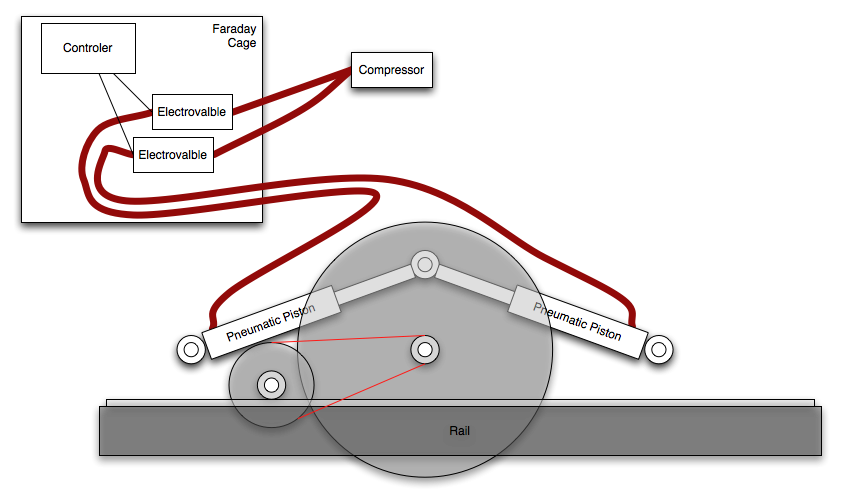 Less EMF distributes several lines of EMF Shielding Material. Notes on shielding: low frequencies can cause more problems than high frequencies. If wires can get through your shield, so can EMI. Coaxial cables or specially woven cables can be used to reduce this problem. -gp 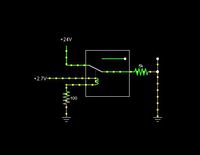 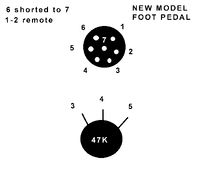 A simple relay circuit, the components depend on the plasma cutter interface. Since the Xylotex stepper controller pipes out unused pins to a second parallel port, we'll isolate the parallel port using an optoislolater and switch on a relay switch which replaces the manual torch ignition switch. If the torch allows for proportional current control, usually done with a voltage divider circuit built with a potentiometer, then we might use a pwm modulated rheostat control with the computer providing the pwm signal. If all that fails, there is alway hacking into the plasma cutter circuit board and taking over control using a microprocessor... maybe version 2.

So it turns out that because the plasma cutter comes with a pilot arc, there isn't an easy way to adjust current anyways. The reason is because the pilot arc circuit measures the current coming off the pilot arc and the work piece clamp comparing the two at low current values. Once it detects that current is flowing through the work piece clamp, it shuts off the pilot arc current pathway and ups the current for the plasma cutter. This means that there are several ways to interface with the plasma cutter circuit, but nothing out of the box. To turn on the torch head, you splice in an external switch that is controllable from the pc. To detect when the plasma cutter is good to go, you can watch for the signal pin that switches from pilot arc current to full cutting current. To adjust the cutting current, you could hijack the potentiometer from the front of the panel, which goes to the pilot arc circuit anyways. Ideally you could also tie into the voltage sensing element feedback loop of the constant current dc power supply to figure out how far away the torch head is from the surface of the work piece. This would allow for dynamic repositioning of the head. 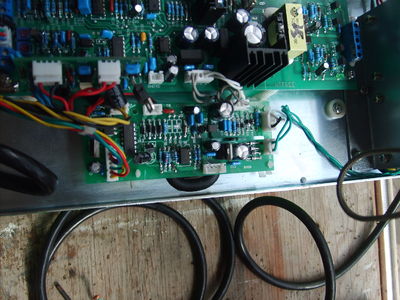 The above is the pilot arc board. We won't be touching it but for future reference, the chip File:Mc14066bcp datasheet.pdf MC14066B is a Quad Analog Switch/Quad Multiplexer which means that it is a likely candidate for investigating when it switches the reference voltage from the pilot arc to the dial setting, it probably means that the plasma cutter is ready to cut. This would make a handy "ready to cut" signal for the pc once the signal is piped out and isolated from noise.

The below picture is the signal filter for the plasma cutter. Its the green circuit board in the picture. It has two extra holes where we can slip in our switch and even use the filter circuit to boot. This just means we need to add an external connector. The reason we chose not to go for a connector that fits the front plug is that the cost of that plug is prohibitive for what we want. Instead we are going to use a phone jack and wire together two pins for our interface. 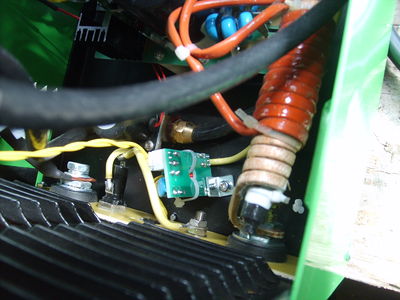 The main board is where all the magic happens. We won't touch this board, but it is interesting to note that most of this plasma cutter could be replaced with a handful of microprocessors. 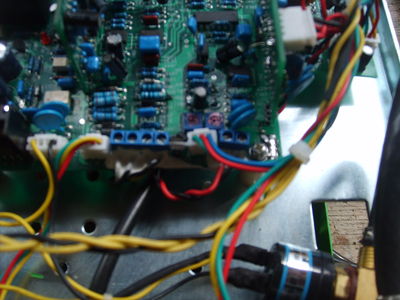 The data sheet for the solid state relay used File:AQV252G.pdf

An quick overview of how this is going to work. The PC uses a parallel port that uses 0-5 volt off/on to communicate to the outside world. This has a guaranteed minimum of 2.6mA at 2.4V. Or so says the internet. The AQV252G is a solid state relay, which means it is optically isolated mosfet relay switch. This is nice because it takes care of most of the heavy lifting design wise, so all we have to do is interface with it. To do so, we essentially turn on and off a built in LED which is coupled to the mosfet. Because every parallel port is different, it would of been a smarter move to put in a variable potentiometer instead of a single resister. Unfortunately, I just thought of this, so we are going to use a 680 ohm resistor instead and hope that the voltage level for the parallel port is on the high side. 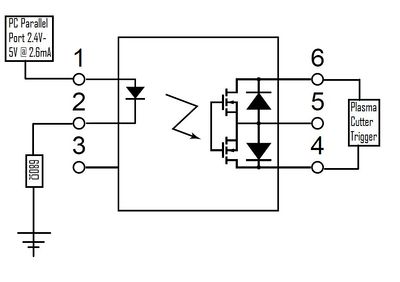 Design rational is basically, I'm treating the torch trigger like a ac/dc signal so I don't have to worry about polarity, and I can adjust the resistance until I can guarantee the parallel port can trigger on the mosfets. Detailed construction notes when all the parts arrive...

Ok, parts arrived. Here is how to put it together. 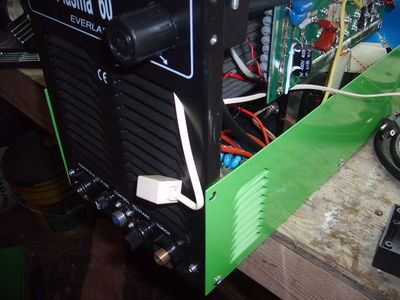 We are tyeing together two wires of the four wires in a phone wire to make a thicker wire. We only need two wires anyways. So, twist the adjoining pairs of wires so your four wires become two, tin them with solder, remove the filter board from the plasma cutter, find the input pins coming in from the torch trigger, 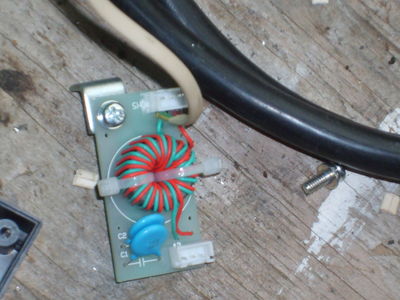 stick the wires through the handy holes on the board, solder them to the board, and reattach into the plasma cutter. 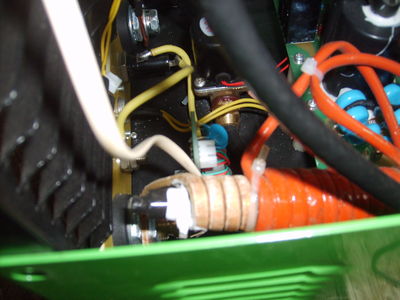 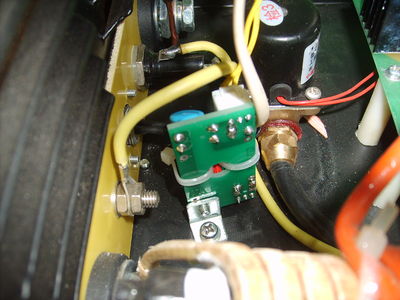 there it is all tucked in. Notice the bottom where the wires are soldered in place. 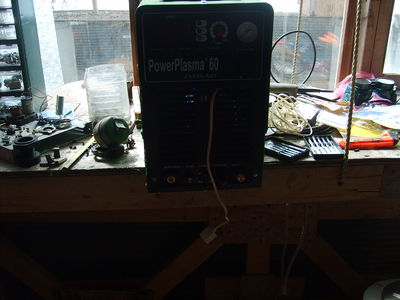 Whew, ok now on to the opto-isolated control box and pc interface. 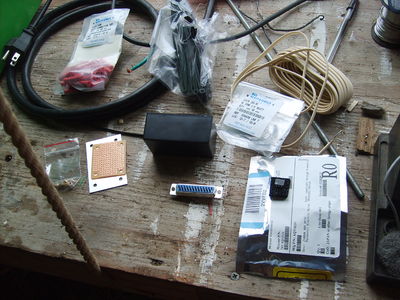 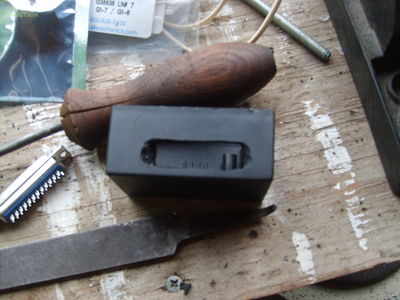 Make a hole in the project box so the db25 connector can be set into the side of the box. Decide which pins will be connected to the optical switch. 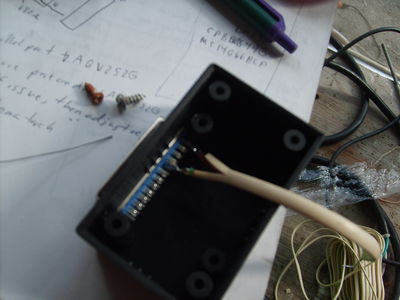 One should be ground and be connected to pin 14. Solder the solid state relay onto the project board, solder and connect the proper wires. Use small wood screws to screw into the plastic to set the connector in place. Screw the whole mess together and test it. 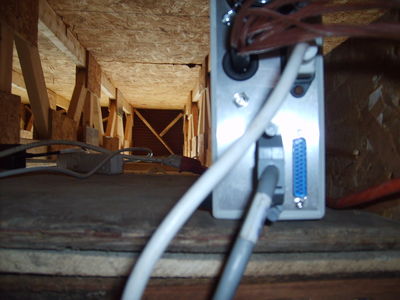