Ballscrews and ballnuts are the conventional technologies.

Watch out for backlash where the ballscrew screws into the ballnut. Even if the ballscrew rotates, the nut will not move until the ballthread tolerance is cleared. Anti-backlash/zero-backlash technology is the solution.

Watch out for thermal expansion/contraction. Ballscrews will expand and contract in size if the temperature rises or falls. This will affect linear precision as well as the fit between the ballscrew and the ballnut. Thermal compensation hardware is the solution.

Watch out for kinetic tension. Ballscrews that experience great axial forces will deflect whatever is supporting the ballscrew at either end. This is why the ballscrew mounts at each end of the ballscrew must be firmly mounted. Also, pre-loading tension into the mount-ballscrew-mount assembly will increase the rigidity of the system because the force-deflection curve of the assembly is non-linear in a good way (more deflection with low forces than later on with higher forces).

How will the ballnut connect with the moving element. If the ballnut is "hanging off" too much for a given load-time curve during normal operation, then the ballnut will heavily deflect; also, the ballnut and ballscrew will suffer uneven wear, especially with shock forces.

The shaft coupling is either flexible (it can accommodate misaligned shafts) or rigid (does not bend at all; stronger than flexible but will cause uneven wear for misaligned shafts). The coupling mechanism is either set screw pressing into the shaft, clamp (where a screw on the wall of the shaft coupling is tightened. Pin, key, splined are alternatives associated with other high strength applications.

Hmm. A lot to put and little time. Maybe I'll hold off this for a while.

Two contrasting mechanical principles are at the root of most precision machine design. 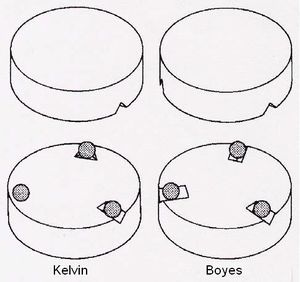 Kinematic design matches the connection between machine components to the number of degrees of freedom constrained. A solid body has 6 degrees of freedom in space: a position and a rotation angle on each (x, y, or z) axis. A linear machine way constrains 5 of those, leaving a single free axis of movement.

The kinematic design principle, as an idealization, assumes that objects are perfectly rigid and that point contact between objects is possible. A kinematic system can be "preloaded" by applying spring forces such that it has zero free play and is precisely repeatable. In fact, kinematic systems routinely repeat their motions much more precisely than the accuracy to which their parts are machined. For these reasons kinematic design principles are widely used in high-precision low-force applications such as optical systems and measuring instruments.

An everyday example of kinimatic constraint is the fact that a three-legged stool does not rock. Full 6-degree-of-freedom "tripod" kinematic mountings are usually of the "Kelvin" (cup-vee-flat) or "Boyes" (vee-vee-vee) styles.

The limitations of kinematic design largely relate to the assumptions of rigid subassemblies and point contact. When loads are large, "rigid" members deflect and "point" contacts exceed the stress limits of even the hardest available materials.

"Elastic Averaging" provides multiple supports beyond the minimum required for kinematic constraint. Multiple (redundant) support resists deflection and can handle higher loads. The forces are distributed across multiple areas of contact. However, these multiple areas must all be in contact simultaneously in order to provide maximum stiffness of support; as an idealization the mating parts are manufactured to a perfect "line to line" fit.

A commonplace example of elastic averaging design is a dovetail slide. The three planes making up the dovetail geometry are machined so that their lines of intersection are precisely parallel; then the slide can move freely without looseness or binding.

This type of design is widely used in metalworking machine tools such as milling machines and lathes which must carry heavy cutting loads. Traditionally, the "line to line" fit of such a slideway has been achieved by skilled hand scraping.

The limitations of elastic averaging design are primarily the requirement for precision manufacturing of mating parts and its loss of stiffness and repeatability (or, alternatively, tendency of moving parts to bind) under wear, changing temperature, etc.

In practice, a well-thought-out design usually embodies both principles. For example, a moving table on a small machine may have two well-spaced linear bushings on a precisely ground guide shaft, and a pair of rollers riding against a second shaft for rotation constraint. The overall geometry approximates a vee-vee-flat kinematic guide, with corresponding advantages in robustness against manufacturing or assembly inaccuracies. However, the kinematic "point" contacts are replaced by precision fits against much larger surfaces which can support practical force levels.