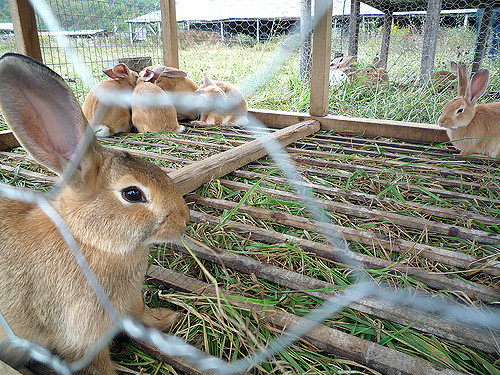 "This may be the only commercial flock of rabbits in the United States that has been line-bred for chemical-free production." - Joel Salatin, Polyface Farms.

PDF on rabbits in colonies

A New Zealand White rabbit, generally considered the best breed to raise for meat
Rabbits are a very easy way to provide meat for a resilient community or ecovillage. If you want to breed animals for meat, what could be easier to breed than an animal notorious for its fertility? Two does and a buck can easily produce 2kg of meat a week in a 1m2 enclosure. The buck should be kept separate, and the doe placed in the bucks enclosure for mating. Rabbits can be fed most leaves and grass. New Zealand white rabbits make about one unit weight of meat for every tree units of feed.

Droppings can be used to fertilize plants - no need to compost it first. The fur is useful too.

A good tip from Mike Oehler: Keep them in a wire cage, but cover the floor with about an inch of dirt. This way the rabbits don't have to walk on the wires, which must be unpleasant for them. To clean the cage, you remove the rabbit, lift the cage and shake it. The earth, fertilized by rabbit droppings, falls through and you gather it for gardening.

You can make delicious rabbit marinade by putting it in a pot with red wine, chives, pepper and other spices, soaking it like that overnight in the fridge and then roasting it slowly.

Rabbits are best harvested at 8-12 weeks of age. See How to skin & prepare a rabbit

Want to see a creepy survivalist guy giving you good advice on how to raise rabbits? I thought so. Check out these YouTube videos:

According to this guide (which is packed with useful information), "the New Zealand White rabbit holds the title for being the top breed to raise for meat purposes due to overall practicality for both the processor and the grower, and closely followed by the Californian. This determination is based on size, growth rates, feed conversion ratios, dress-out weights and meat-to-bone ratios."

The New Zealand White is fertile year-round and has a gestation period of about one month.