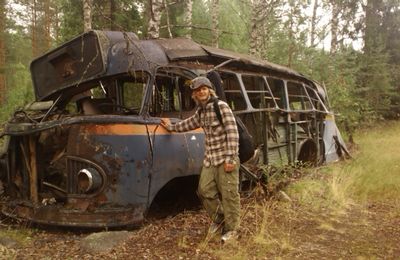 One of three Swedish-Finn directors who were chosen to direct Annina Enckell's script "En tystlåten person". Directed, produced, filmed, edited and composed the music to the film (8 min). Broad-casted on Finnish television, autumn 2008.

Course Administrator and teacher in the Film and theater course at the Folk High School "Borgå folkakademi" in Porvoo, 2008-2009.

Stage-manager for "Nyländsk afton", a big Swedish-Finn event were dozens of summer plays and bands join together for a one big show, 2007.

One of my recent videos
http://www.youtube.com/v/nKone3F9i7k

The consumer lifestyle makes us delusional. We think it's money that gives us our basic needs and wealth. Everyone is striving for the money without thinking about nature. This is a very dangerous delusion because then we see nature only as an endless resource. We don't have to respect nature and when you don't do that you destroy it. Todays society is digging it's own grave by not going back to the roots, to the basic needs. But that's exactly what the GVCS will allow anyone to do. To unplug ourselves from the delusion and live with nature again and to only take what is needed.

I think you can make an endless list of how GVCS will help with the issues of the world...

The idea is not as widely spread as it it should be.

L33t in Video/Graphics/Art (using open source software).
At my school where I work I renewed their internal communication system using Google Apps and I've also done the PR/Marketing work at our school.
Teacher in film making for 5 years.
Good skills in using linux and lots of software. I'm a fast learner.

I'm a true fan for now but I would like to contribute in other ways to.