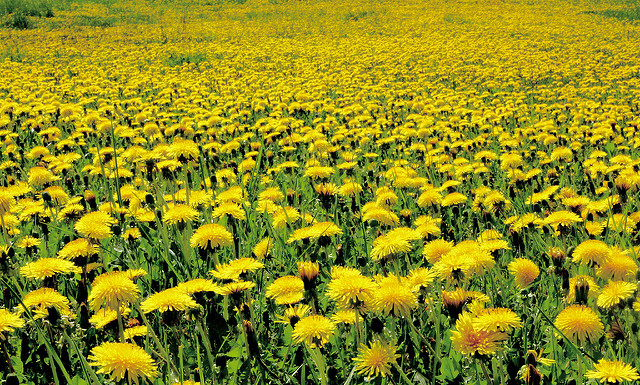 Sea of dandelions. Every year there are more and more of them!

Ken Fern, author of Plants for a Future, was the first writer to open my eyes to the astounding array of uses for plants. One of the greatest eye-openers was that the latex found in various temperate zone plants was significant enough to be commercially viable. On his website, Fern lists over 60 species (!) that produce potentially useful amounts of latex, including various dandelions, milkweeds, thistle and ground nuts.

I tucked that info in the back of my mind, only to come across it again and again in various other readings about edible. medicinal, and useful plants. Apparently dandelion, our ubiquitous friend, was actually cultivated in Poland during World War II for its latex. Dandelions are still cultivated today for their latex in various Eastern Europe and Western Asian countries according to Wild Foods and Useful Plants by Christopher Nyerges.

With that in mind, I began my search on turning dandelion (and other temperate plants) into tires (and other useful rubber products). The first webpage I opened on this topic [1] announced that Ohio State University had (Summer 2008) received a $3 million grant to "start turning dandelions into rubber." This seems absurd to me, considering rubber production from dandelions has been viable AT LEAST since world war II. Moreover, dandelion is ubiquitous, a plant of the common person. Nyerges refers to as the "poor man's ginseng" as it is nutritionally and medicinally rich (although sorely under valued as such). As such, the study of turning it and other plants into latex should be open and decentralized. Latex production should be common knowledge and I hope that in the near future it is produced on a community or village scale.

The goal here is to provide practical information and plans for making local rubber out of temperate climate resources.

History and Resources on Rubber Produced in Temperate Climates

Temperate Climate Plants that Produce Latex and an Evaluation of their Practical and Ecological Use in Rubber Making.

The original basis of this list is from the well-researched and documented Plants for a Future website [2]. Others may be added as further research is done.

Within the species of Dandelion, Taraxacum kok-sanghyz (abreviated as TKS), the Russian or Rubber Dandelion has the highest latex content. According to Nyerges TKS has 20 percent latex content, while the officinale species has 16-17 percent dry-weight latex. Yields of 150-500 kilos per hectare are recorded [3].

Since the common dandelion has the greatest medicinal and nutritive value, ecologically, it may seem most prudent to grow this multi-purpose species. However, the latex from T.officinale is "a low quality latex, which can be used for making rubber" [4], which suggests that it is not ideal for this purpose.

The latex from T. kok-sanghyz however, is described as high quality and comparable to latex from Rubber Trees [5] [6].

How to Convert Latex into Rubber

This section is divided into plants that are processed in similar ways. Equipment for planting, harvesting, and extracting as well as processing should be defined. Sources for plant material, seeds or otherwise should also be included.

The roots of the plant are used for latex production, harvested in fall before a hard frost can destroy any of the latex. I'd like to see a study on actual changes in latex composition before and after frost. Also, a study comparing the content at various other stages of the plants growth would be beneficial.

The roots are macerated, which, according to the free on-line dictionary [7] means to "To separate into constituents by soaking". I don't have information on what to soak them in. Fern says water is used as a soaking medium. Are there better mediums to use? Does the root need to be crush before it is soaked? How long should it soak for? Fern references Polhamus. L. G. Rubber: Botany, Cultivation and Utilization which may have beneficial information for our purposes.

Fern suggests, specifically under the T. kok-sanghyz description, after the latex is extracted, starch inulin can be converted to fuel alcohol. This secondary use would increase the ecology of using the TKS species.

Chemistry of Rubber and Rubber Products

Equipment Needed for Rubber Production: From Harvest to Processing

We invite student research projects with the aim of: