> FYI - > http://groups.google.com/group/solar-turbine/browse_thread/thread/fec5c75431d69a09# > > There's a note on possibility of using linear actuators with Arduino 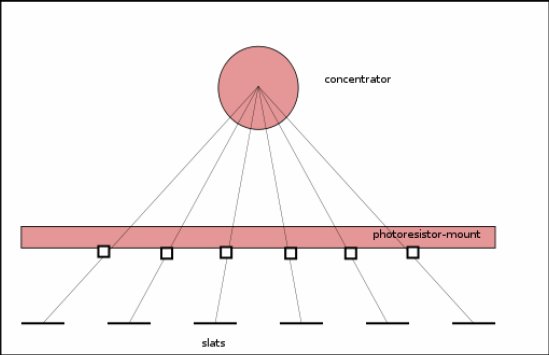 Very interesting. I've subscribed to the group. But haven't found out how to reply to a discussion via email, so feel free to put this mail including attachments into the group if you think it to be valuable.

BTW, you should fix the "scheduled for mid-2009" in the group description.

concerning the discussion on controlling the slats:

I'd also go for individually controlled slats -- I've already thought about the necessary electronics for arduino to be able to control more slats than the arduino has I/O pins by using a serial-in/parallel out shift register. That way we can select which slat and corresponding sensors we want to read/write and use the arduino to adjust each slat in a round-robin fashion.

I have thought about using cheap linear motors and probably some plastic gear for controling each slat (gear can probably be made with a RepRap). The arduino would turn one of the slats (quite slowly) until a photoresistor has seen the edge of the reflected light on both edges of the slat. The arduino would measure the time it took from one edge to the other and then adjust the slat to the middle position just by measuring the time when turning the motor backward. Since the arduino can do quite good time measurements we would achieve enough precision, I think.

I've attached a drawing how I think the photoresistors could be mounted in the path to the central concentrator, and, yes, this will cast some shadow but the resistors can be mounted on a very thin structure, the resistors I'm envisaging are 5mm in diameter (0.2 in)