This is a log of the implementation process, dead ends and all.

The first idea to be implemented was a 4'x 8' tensioned plywood panel covered in aluminum foil (later to be mylar). The tension applied by two rows of bolts with wingnuts holds the plywood in a parabolic shape. 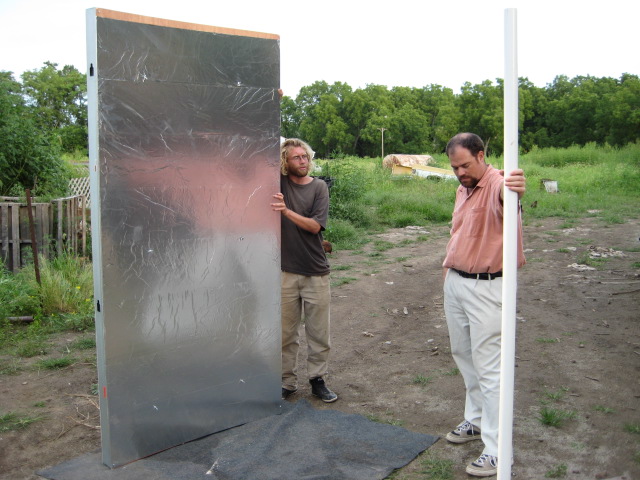 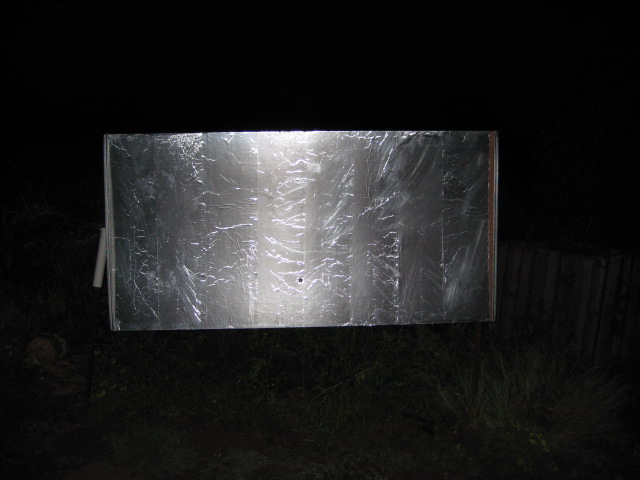 At sundown, this panel appeared to give a tight focus (as Ben learned first hand). 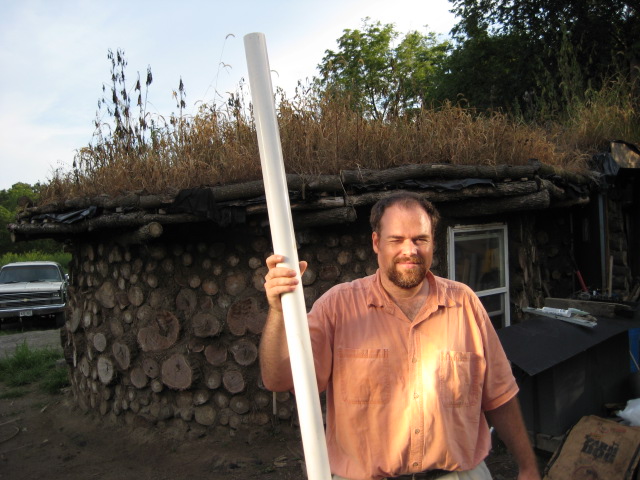 Under greater intensity light however, the flaws of the design became apparent as a foot wide strip was clearly illuminated. The imprecise optics may be due to the diffuse reflectance of the aluminum foil. Experiments with mylar when it arrives will be telling.

Getting ready for testing the second collector: 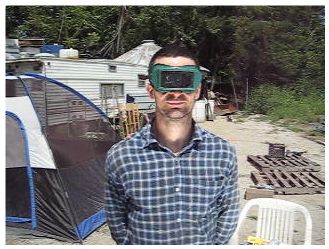 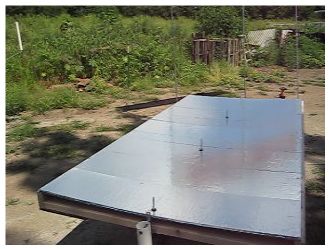 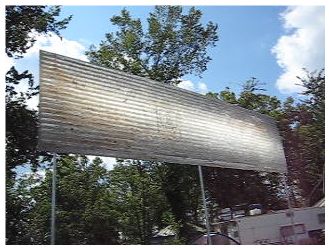 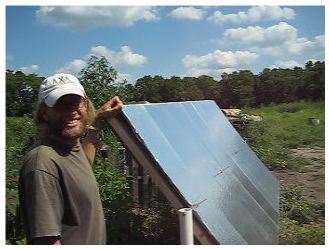 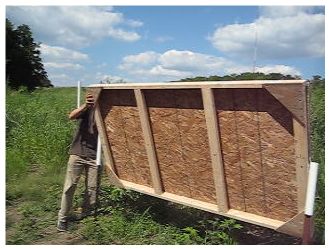 Due to the changing focal length of the system as the suns angle parallel to the trough axis changes, the concentrating ability of a single parabolic reflector is limited to about 2 in an east-west axis system. Therefore, the next panel implementation will be only one foot wide as opposed to four feet. Experiments with mylar stuck to a curved plywood or oriented strand board backing will be preformed. Strectched mylar seems unlikely due to the high cost of thick (5 mil) mylar.

The local hardware store has 1/8" glass mirrors for $1.50 a square foot, which will easily curve under tension to our desired shape, probably won't require plywood backing and which should long outlast mylar.

Back to the Drawing Board

Here is the design with the sandwich of curved surfaces: 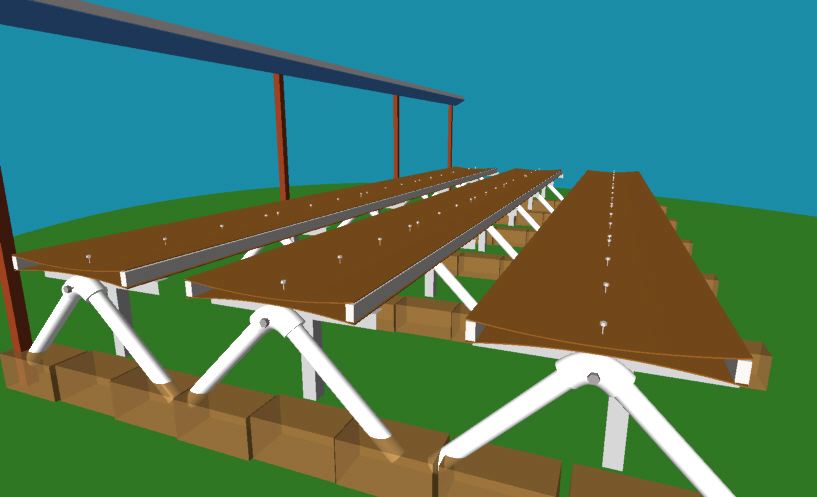 I enjoy your reporting. Thanks.

The group that I was working with in the 1970's found two ways to create good reflector surfaces using aluminized mylar:

1. Pull a vacuum behind film that is mounted in a circular frame. 2. Use a formed shape to push the mylar, and then rigidify it. We used a searchlight mirror as a mold for a fiberglass "parabolic mound", stretched the mylar over a ring, and pushed the ring down around the mound, the coated it in fiberglass (ugh).

Glass mirrors in a Fresnel arrangement is another option.

These things are shown in the book that I wrote at the time- the Natural Energy Workbook Vol. II. It has been out-of-print for 20 years, but is available used on Amazon.

Keep up the good work!

Sorry to hear about the problems with reflective surfaces. We've been getting lots of questions at the Fab Lab about laser etching glass and mirrors recently, and while glass is no problem mirrors can't be done as they'll scatter the beam and fudge up the laser. So I checked out how it's currently done..

What I think you might want to do is build your own parabolic glass sheets to specification. You could do this by, for example, milling out a wooden block in negative, casting silicon over that making a positive mold, then stone casting over that (ceramic mold). It's a three step process but it'll give you lots of leeway for accuracy, specially as the silicon will maintain details very well. Given the stone mold, pad it with green sand (mix of silica, water, and some other stuff) and put pure silica (SiO2) mixed with sodium carbonate (Na2CO3) into the mold and bake at 1500°C. Supposedly this should give you a translucent sheet of moderate quality.

When this is done, rough application of a molten tin-silver mixture to the back surface should both remove any roughness in the glass at that side and provide a reflective coating.

... but that said, making mirrors is unfortunately a bit complicated and delicate. How can it be made simpler?

Looking forward to the next episode!