From "Steam Engineering: A Text Book" by William R. King.

With a given style of valve, the cylinder clearance should be confined to a minimum percentage of the cylinder volume based on engine type. We have elected to go with 6% (range of 3 - 8% for a medium speed engine).

Initial pressure should be chosen such that the terminal pressure to economize steam consumption per unit of power.

For any given design, the piston and piston speed are pre-defined.

Diameter of the cylinder depends on on the piston speed and mean effective presure permissible to obtain a given power.

The mean pressure depends on the initial pressure and the ratio of expansion given by the formula:

The mean pressure makes no allowance for wire-drawing, release, or compression. As such, a factor must be designed to cover these losss. Back pressure must also be deducted to get the mean effective pressure (MEP).

When derived theoretically, the MEP is never actually realized in practice. This is due to:

Practical evidence shows that the actual MEP is a percentage of the theoretical:

Generally determined for convenience, type of engine, and nature of the work to be done.

Depends on the length of the stroke and RPMs. Expressed in feet per minute.

Strokes of stationary engines vary from 8 to 60 inches.

Marine engines are often 18 to 50 inches.

Theoretical indicator diagrams can be used to determine stroke of the piston, piston speed, and initial steam pressure by changing them as variables. Steam consumption per IHP per hous can be determined along with an estimated efficiency.

A detailed example is given on pages 312 to 219. This is worth reviewing carefully.

Engines of different types so not use the same amount of steam for a given power rating.

Steam consumption is important to specify how much steam a boiler needs to produce and how much fuel is consumed (presuming a fuel powered boiler instead of solar). 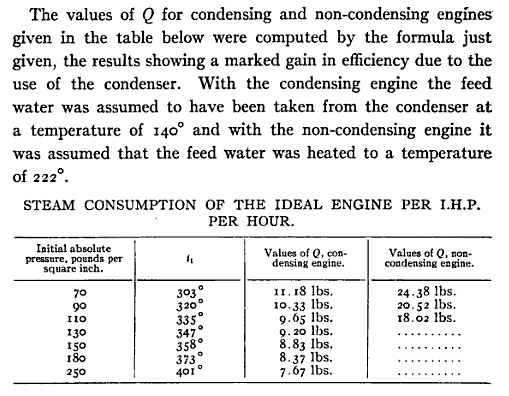 The indicator diagram can be used to determine actual steam consumption.

The volume of steam avaialbe for use at any point in the stroke is equal to the volume displaced by the piston up to that point plus the volume of the cylinder clearance.

Measure the volume at the cut-off point to determime the volume of steam used per cycle. Multiple by strokes per hour and divided by indicated horse power (IHP) to get pounds of steam per IHP per hour.

Several examples are given in the book.