From "Steam Engineering: A Text Book" by William R. King.

A defective design can cost as much as 20% loss in fuel consumption.

It can also cause uneven motion resulting in wear on the working parts that can make the engine unsafe.

The book focuses on a slide valve design staring with design of the eccentric to control it's operation. Can the following diagram be adapted to work with a bump valve design somehow? 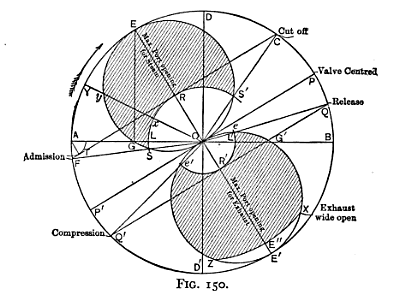 The bump valve somewhat like half of a slide valve, but instead of being controlled by a separate eccentric, it is controlled by the piston head itself. Admission and cut-off are determined by the length of the valve pin. Exhaust port opening is determined by the cylinder reaching a certain point near the bottom dead center of the stroke.

The Zeuner Valve Diagram can give the following information: