OSE is interested in tipping the economy towards open source, collaborative development. This is based on the definition of the open-source economy and the Tipping Point. Rensselaer scientists have calculated the Tipping Point to be 10% of the population. The Tipping Point is defined as the number of people required for a massive societal change to happen.

OSE assumes that the route to transforming the earth, environment, and consciouness as we know it must include an open source, collaborative, non-protectionist, secure, distributive model. OSE's specific implementation is the Distributive Enterprise. The proof of its success would be an immediate (10 year) transformation of the economy away from any sort of protectionism, leaving everyone to the wind of open access, efficiency, and innovation. The end state would be a recognition of collaboration as a preferred system. For anyone thinking that collaboration already exists today - no, it does not, and it's expressed very clearly in the ubiquitous proprietary, patented, trade secret, confidential, and privileged nondisclosure of corporate form. Oh yes, facetiously speaking - collaboration exists everywhere - except in the economy.

In order to reach the tipping point of the open source economy, subject matter experts and documenters across all areas of human productive knowledge are required. Let's accept as suggested that the Tipping Point is 10% of the population. The relevant 10% of the population includes only the primary and secondary sectors of the 3 Sector Economic Theory, which is 30% of the economy. Only the first and second sectors are included because the third sector, services, is derived from or based upon the material production sectors. Thus, 3% of the economy needs to be converted to open source to reach a tipping point.

Hence, this is the proposed tipping point: 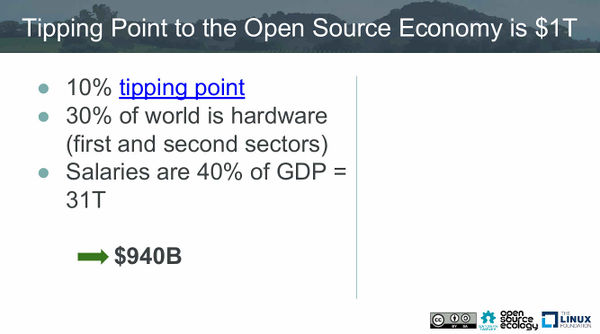 Open source economics will mean that the culture of open source will likely permeate the population - just as a permanent warfare economy permeates society today. The psychological question is whether the economy is just a manifestation of human character, or is that negotiable? Generally - nothing human made is inevitable. Human action is a result of choices, manipulation, and other factors - but other than that, humans can be quite flexible. The OSE perspective indicates that power concentration is the rule behind the current economy, which has skewed the economy to certain options. From The Second Industrial Divide, we learn that many other technologies could have entered the technosphere - that a choice exists. For reasons of human psychology and empirical analysis such as in The Second Industrial Divide - we accept it as true that - as in all cases of the human spririt - it is always up to us. We have a choice to go open source and to accept collaboration as the next evolutionary point of humanity. This means a world where business models in practice simply do not rely on exclusion, competition, warfare.