Preheated water is to be delivered to the absorber of the Solar Turbine by the use of a system of valves controlled by solenoids.

Here is an elementary sketch:

This drawing only shows the positions of C1, C2, C3, V1 and V2, and not the details of their dimensions, shapes, orientations, etc. The tilt of the delivery pipe however I feel is operationally significant.

V1 and V2 are to be open and closed by solenoids. Some sort of electronic control is necessary for timing the opening and closing of these valves. One possibility is something with electrical contacts that spins like a distributer for a car. But because the timing (duration and interval) of valve operation is completely unknown at this time, a digital control circuit seems to offer the most flexibility.

Flexibility: The duration for which a valve is open should be adjustable for each valve (filling C2 may be slower or quicker than emptying it), as should the interval between openings (ie, the closing of one should Italic textnot immediately open the other, some adjustable delay should account for the response time of the valve so as not to briefly have both valves partially open).

Feedback: An ideal system would likely have some feedback, where the temperature/pressure of the absorber or speed of the turbine influences the rate of water delivery. the proper implementation of feedback however cannot be considered until manual operation of the device over a period of time becomes predictable.

Safety: Questions: Should the valves be open or closed upon losing power? I say open so that once the turbine is spinning and making power, any failure that causes loss of power to the valve solenoids or control circuitry should result in allowing the Absorber tubes to discharge into the reservoir rather than building pressure and exploding. Or, if the pressure in the tubes is too low, reservoir water will flood the tubes upon valve failure, which has no harmful effects that i know of.

Here is the control circuit proposed by Elliot Hallmark: 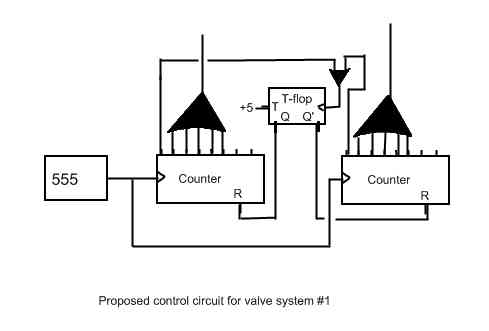 Chips used: a 555 timer, two binary counters (8 bit shown, any thing more is also acceptable), and a Flip flop (toggle flop or a D-flop wired as a toggle flop)

the "Or"ing can be taken care of with simple diode "Or" gates, so that the number of diodes needed is equal to the number of inputs into the Or gate.

the 555 times sets the pace. Only one counter is counting, and the other is held at reset. for the first few counts, both valves are closed. As the bits that are part of the Or gate become true, that valve is opened, and is held opened until the highest bit is toggled. At 1000 0000, the toggle flop is clocked and the counter that was counting is reset, its valve closes. The other counter is allowed to start counting. again, its valve does not open until the first few bits are counted.

By changing the pace of the 555 timer and the pins Or'ed to open the valves, a wide variety of timing possibilities are available that can be easily altered at any point in the life of the circuit.

This circuit lacks feedback that would make operation with reduced or no supervision possible. the topology of this feedback would need to be determined after the real behavior of the turbine system is familiar experience.