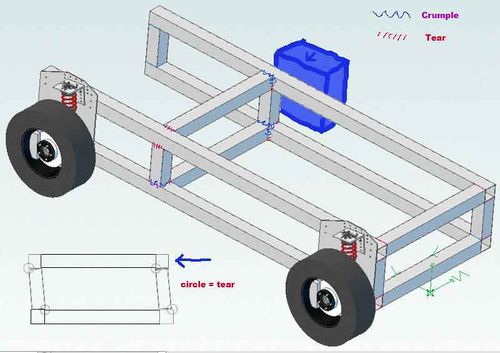 >>> ...while we have no reason to suspect a safety flaw, we must not ever stop examining for one, and must always take advantage of knowledgeable folks offering to help collaborate with us on safety systems and testing. >>>

Since safety is the issue, I’m happy to be taken advantage of.

In my opinion, the highest priority weaknesses in the Wikispeed chassis (which I note from the videos is now the OS Car prototype chassis as well) stem from strain loads at welds, and a general lack of triangulation.

I don’t have much data, but working from the materials specs, dimensions and processes shown on http://opensourceecology.org/wiki/Wikispeed_SGT01 the chassis is made from 6061 T6 tubing, and from notes in this seven-person discussion group I understand it is TIG welded with heat treating post-weld.

The material issue is that the 6061 alloy with T6 heat treatment is a relatively strong and rigid material, particularly relative to the same alloy in an untreated state (T0) and welding cancels the T6 treatment in the vicinity of the weld, taking it back to T0.

To compare the metal’s mechanical specs before and after welding, see…

In this chassis application, the difference in ultimate tensile strength is greater than the specs show—more like 14000-15000 psi vs. 45000—because since the small welded section fails before the large unwelded section even takes a set; the welded section starts stretching at 8000 psi and as it stretches, it necks down and the metal gets thinner. For example, each side of the 4” x .125” wall square tube has about 1/2 square inch of cross section, but once it starts to bend at the weld, the weld on the outer side of the tube begins to stretch and thin. Once it thins to, say, .100” wall, there’s only 2/5 square inch of cross section, so while it might take 9000 pounds of tension to tear that weld all else being equal (18000 psi x ½ square inch = 9000 pounds to failure) it’s not so equal once the weld begins to yield, and if it stretches down to 2/5 of a square inch, 18000 psi x 2/5 square inch = 7200 pounds to failure, for an effective ultimate tensile strength of 14400 psi if you’re calculating from pre-stretched dimensions.

The lack of triangulation problem is it makes the wikispeed frame the opposite of a space frame — instead of having loads carried through tubes in tension and compression, many loads are supported by the stiffness of the tube junctions, which since the junctions are T0 instead of T6, are not up to the task if faced with unusual loads, such as getting hit by another car. For example (I’ve attached a drawing; if your ISP blocks unexpected attachments, click http://dl.dropbox.com/u/66433621/StrainSketch.jpg to see it), if you do simulations where both the top and bottom frame rails get struck at the same time and with the same force, the transverse tubes in the section behind the cockpit are going to show compression loads and the upright tubes are going to show little or no loads at all, but if the impact is off center or the initial strike is to the upper rail (as is common in car accidents—the bumper hits first, followed by the grill, and the lower portion of the struck car isn’t hit until the striking car’s suspension reaches the strikee) then the tops of the 12” high uprights move before their bottoms do and there’s a 3 to 1 mechanical advantage acting on the 4” junction between the uprights and the frame rails.

Each junction can support roughly a 1300 pound load (8000 psi x ½ square inch divided by 3/1 mechanical advantage) before the tube junction starts to yield, but once it goes it’ll go fast, because as one side of the tube weld crumples, the 4” fulcrum gets effectively shorter. For a BOE calculation, each junction may be good for as much as 2000 pounds before failure in this side impact example, and there are four junctions resisting the load (the two uprights welded to the frame rails, and the two transverse tubes welded to the frame rails) so the assembly might well withstand an 8000 pound load, and assuming the lower portion of the frame carries 2/3 of the impact resistance (all of the passenger loads, most of the wheel loads, most of the inertia load of the powerplant) and the car weighs 2000 pounds fully loaded, it’s good for a 6G impact (8000 / (2000 x 2/3) = 6).

However, if the analysis and simulations have been done with the assumption that the chassis is all one material (which it is chemically, but not functionally) one might be off by a factor of 5, and believe the chassis is sufficient for a 30G impact.

This is a back-of-envelope strain analysis and is surely wrong in details, but it’s close. It might take a few more than 6 Gs to penetrate the chassis, but if you get hit from the side by a pickup, SUV or crossover car, you’re going to have it in your lap before you hit 10 Gs. The chassis will fail by tearing at the circled areas shown in the drawing, long before the shear strength of the aluminum (12000 psi, fyi) becomes a factor.

The simulation graphics on the various Wikispeed videos show the chassis as a monolithic structure, but it’s really not one. At each weld, the yield strength is 1/5 the strength of the surrounding tube, and as the saying goes, a chain is only as strong as its weakest link.

Here are some ways to alleviate this:

-- Either heat treat the entire chassis after welding OR make the chassis out of 6061 T0 to begin with. I don’t know which would make the safer chassis. The T0 chassis would be more expensive to operate, because relatively minor accidents would bend it, but with T0 having twice the elongation at break as T6, T0 would take twice the impact to reach the same G loading and it might absorb more total energy before failing. But as it is now, T6 for the most part with small areas of T0, that’s the worst of both worlds—it won’t bend more than its T6 major parts and won’t tolerate higher loads than its T0 welds.

-- Bond or rivet (or both) shear panels over every exposed rectangle in the chassis. You need to leave the biggest rectangle open (it’s the one the passengers get in through) so add another transverse tube as far back into the cockpit as you can, and put a shear panel between that tube and the upper transverse tube at the front of the car. Alternatively, you could triangulate the open rectangles by welding diagonal tubes between one corner of each rectangle and its opposite corner.

Wonderful analysis Jack, and this is exactly what we have experienced. In the front impact scenario, I foresaw this and instead of a labor or money intensive solution I simply designed a bolted a plate which spanned the entire chassis height and bolted it to the chassis. This channeled the load across all members and worked fantastically. Bryan Ford modified the design for even easier fabrication and in physical crash testing it absorbed the entire 40% offset frontal impact (the most difficult frontal impact test) with no cabin penetration! We tested a side impact without this feature on the chassis side (which our current side crush modules do have) and experienced EXACTLY what you predict below- the top of the chassis pushed in and cracked the side welds. Again, by adapting the front crush module to the sides we have alleviated this problem though- and without triangulation or any other labor or time intensive application, which I'm pretty excited about honestly. -Joe