This sofware was used for the March 19, 2016 Prusa i3 Build. Evolution is continuing for future 3D printers - see 3D Printer Roadmap. One can either use the ISO below or download and install individual software packages:

This is used to generate a USB stick for running a separate operating system with all control software.

In order to eliminate any software issues, OSE is preparing a Live Linux on a USB stick so the printer can be run from a USB stick, regardless of computer platform. Our software has all the required programs and settings for running the 3D printer.

After downloading the Folgertech 2020 Prusa i3 Marlin, installed Repetier on an Ubuntu operating system. Dragged it to the sidebar (Unity launch bar) after installing via commandline, so clicking on the Repetier icon opened up Repetier.

Repetier kept crashing (apparently due to bad baud rate setting) se we switched to Cura, Lulzbot edition, which did not crash but allowed no settings to be changed. So we went to Pronterface as the most robust solution, which did not crash and allowed the baud rate to be changed. By this testing, Pronterface is thus our default choice, based on best initial performance.

So back to Pronterface. After installing on the Desktop, and going into its directory and running it by typing in Terminal: ./pronterface.py (can't run .py by double clicking it on the used Ubuntu system) (see to the right). 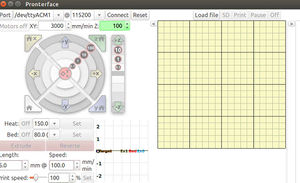 Raw Pronterface 3D printing interface after running, prior to connecting a 3D printer.

Maps how gcode is implemented in different firmwares. - http://reprap.org/wiki/Gcode For something on how firmwares' implementation of gcode could be improved regarding modularity concepts, see Gcode_Modularity.