Aquaculture is farming on water. Many of the same principles as farming on land apply, and there can also be synergy between land-based and water-based farming - for example, chickens and ducks will find forage at the edge of the pond. In any system of agriculture based on the interconnections between different organisms, the most productive area will be the edge between two different environments. Therefore, when integrating aquaculture and agriculture it is best to maximize the edge length of the pond; a square pond is a bad idea; one with crinkly edges is much better.

Because fish are cold-blooded, and because water provides buoyancy so they do not have to expend energy to hold themselves up all the time, they are much more energy-efficient organisms than land based animals. Nutrients dissolved in water are more readily absorbed by organisms. For these reasons, aquaculture is 4-20 times more efficient than land-based agriculture in terms of the energy used to make a unit of food and the yield per unit of area. You can, for example, get 12-15kg of food per year from a single taro plant.

Water quality can be controlled to a certain extent by landscape design. Large stones placed in a pond will serve as a heat sink, making the water cooler in hot weather and warmer in cool weather. Growing reeds helps to oxygenate the water. Freshwater reeds grow much faster than any land-based plants can, so make a good source of feed for herbivorous animals. Algae often forms the bottom of the food chain in an aquaculture system and goes on to be converted into larger edible organisms. Therefore, an area of still water with tree stumps where algae will grow can be advantageous.

Chimpanas were a highly productive means of agriculture developed by the Aztec civilization. They possibly hold the title of the highest-yielding kind of traditional agriculture. They have since been adopted by the permaculture movement.

They consist of a series of alternating canals and narrow artificial islands. This gives you a lot of different areas with different yields -

These different areas also synergize with each other. The vines drop nutrients into the water. The water provides nutrient for reed crops which feed land-based animals. The ecosystem can become extremely complex, with thousands of useful synergies.

Aztec chinampas were intermittently fertilized with compost and with mud dredged from the bottom of the lake. The water flowing around the island creates a microclimate in which extremes of temperature are mitigated. 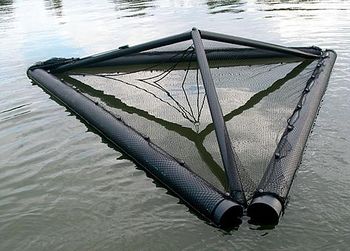 An open-source design for a small modular fish farm has been made available by the opensorcerors at N55.dk. It can be stocked with fish and left floating in any body of water you have on your land. Fish can easily be harvested from the module. Multiple modules can be linked together, according to how much room you have.

Oysters provide a food source in addition to substantial environmental benefits, such as filtering water and providing a marine habitat for smaller fish and organisms. Permits may be required depending on locality.