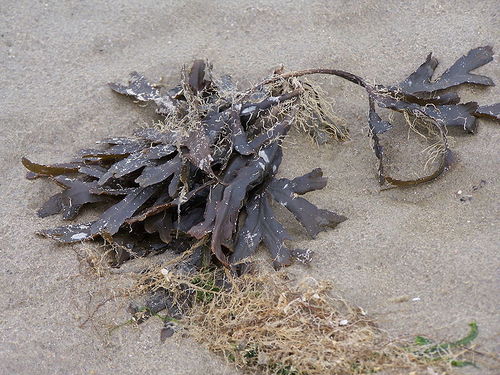 Macroalgae (seaweed) for use as fertilizer 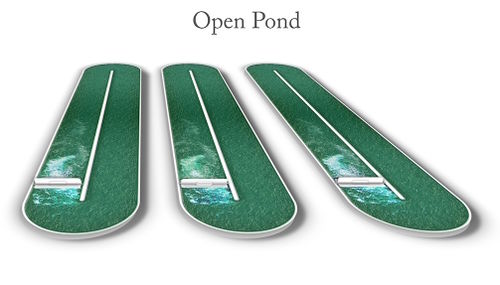 Design of a raceway open pond commonly used for culture of microalgae. 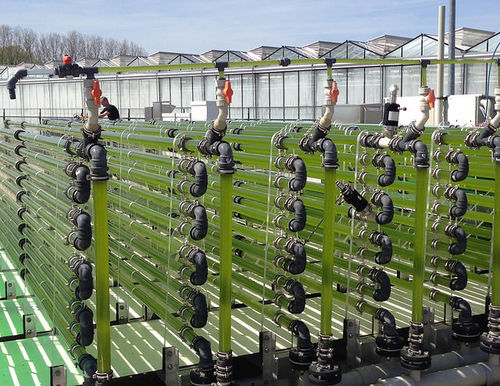 Algae are a useful first step in many designed, productive ecosystems. They are easily grown in nearly any body of water. They can be applied to several purposes.

microalgae: small microscopic aquatic photosynthetic plants that require the aid of a microscope to be seen (examples: chlorella, spirulina)

macroalgae: large aquatic photosynthetic plants that can been seen without the aid of a microscope (example: kelp)

Spirulina as a food source for humans

Spirulina is an extremely nutritious microalga that can be grown on a small scale. I've never met anyone who likes the taste of it, but it can be ground up with avocados or pesto or other things to mask the taste. Spirulina grows in long spiral chains that can be easily harvested in a cloth. It grows in highly alkaline water with a pH of 8-11.

Algae as a fertilizer

Algae can be used to capture fertilizers in runoff from farms. When subsequently harvested, the enriched algae itself can be used as fertilizer. Agricultural Research Service scientists found that 60-90% of nitrogen runoff and 70-100% of phosphorus runoff can be captured from manure effluents using an algal turf scrubber (ATS). Scientists developed the ATS, which are shallow, 100-foot raceways of nylon netting where algae colonies can form, and studied its efficacy for three years. They found that algae can readily be used to reduce the nutrient runoff from agricultural fields and increase the quality of water flowing into rivers, streams, and oceans. The enriched algae itself also can be used as a fertilizer. Researchers collected and dried the nutrient-rich algae from the ATS and studied its potential as an organic fertilizer. They found that cucumber and corn seedlings grew just as well using ATS organic fertilizer as they did with commercial fertilizers "Algae: A Mean, Green Cleaning Machine". USDA Agricultural Research Service. May 7, 2010.