The design objective for the OSE CEB was to produce the simplest, high performance, lifetime design, design-for-disassembly machine - made with stock and minimum-machined parts - at the lowest possible cost. The design follows OSE Specifications

Results and Improvements Made 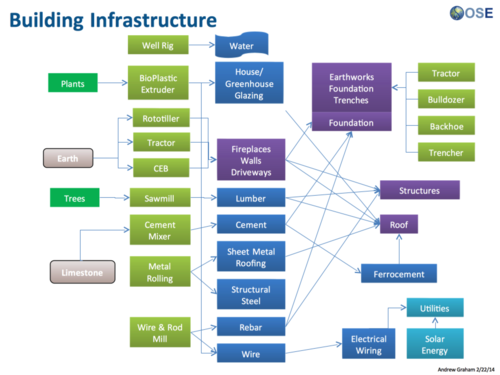 Physics of why the CEB press works

Bricks are made of 20%-30% clay, the rest being sand and silt. A combination of mechanical and electrostatic forces is responsible for the high strength of compressed earth blocks.

Compression physically removes voids from the earth. As particles come closer, mechanical forces of rough particles touching each other lock particles into place. For microscopic particles of clay, which are less than 4 microns in size - electrostatic forces of intermolecular attraction begin to play a role.

It appears that the exact nature of the large compressive strength of pressed earth is not well understood.

Back to Table of Contents