Hey guys, I've noticed most recently on the "http://opensourceecology.org/wiki/Brick_Press_Viral_Replication_Checklist" that you guys are working on integrating a pressure switch into your CEB Press designs. I've started to do just the same. I've got the first prototype built and have code all ready to go. Just got my new pressure switch in the mail yesterday.

I was wondering if whomever is working on this is interested in sharing results as we go and collaborating.

I've also got some more ideas for a new board design, but would be interested to talk to those interested first.

I did many hours of searching and finally chose this one: http://ecatalog.gemssensors.com/ecatalog/pressure-switches/en/209667

Those are the exact reasons I was thinking too. I've also heard that the magnetic sensors have been a bit finicky, and figured that for $32 I can avoid 3 magnets, their calibration and their possible failure, while also making it possible to auto-shut off all solenoids in the event of an unexpected pressure surge.

Since I have a pressure relief valve on mine, I was thinking of trying to use the pressure switch to signal the end of every step where a cylinder would bottom out as well as the end of the brick compression stage. Magnets would still be necessary for brick thickness as you mentioned and for mid stop of the secondary cylinder to prepare for compression, since those are mid cylinder positions. I only feel comfortable trying this method out since I have a pressure relief valve on the CEB Press itself. I am a little worried about additional stress to bottoming out cylinders, but everywhere I read said that if you shouldn't worry about it. This also means that I can have a auto shutoff in the event of a jam or something like that.

We could consider an analog pressure transducer like this one. Although it is more costly ($89),

One potential mode of operation is this: Control the compression stroke based on position feedback (might want to be more precise than existing Hall sensor) so that bricks are always made to the same dimension. But also continuously monitor the compression force required to reach dimension (via analog pressure transducer) and 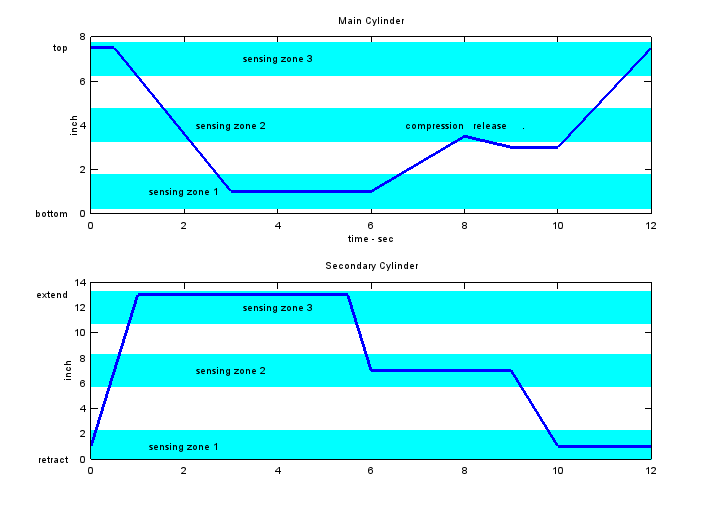 The sensing zones shown above are incorrect (there are only two transitions per stroke). These plots need to be fixed, and some of the logic description details on this page need to be corrected. See also CEB_Press/Manufacturing_Instructions/Controller_Box/Source_Code

The left of the cycle chart starts with a completed block having just been raised from the chamber, and the drawer already filled with fresh dirt. Subsequently, in sequence,

The progress of the cycle is controlled on the basis of

The chosen approach for feedback is described under Sensors below.

The sequence logic is implemented by a C++ program compiled in the Arduino development environment and uploaded to the controller board.

Upon power-up or reset, the first action executed by the Arduino board is to wait for a short time, inspecting to see whether it is communicating with a host computer over its USB serial port. (This capability is not used during normal operations.) After that time expires, it executes an initialization routine, then enters the operational loop.

Starting from the left of the cycle diagram above,

Although an early prototype controlled machine movements on the basis of timing alone ("open loop" control), this method is not robust against variations in power source flow, fluid viscosity, soil load, and so on. It is essential to use feedback of the machine position in order to get reliable operation.

There are three important positions in the main cylinder stroke

There are three important positions in the secondary cylinder stroke

There are many approaches to feedback, including a continuous position encoder, a fluid pressure sensor indicating "bottoming out" pressure, etc. The method chosen is simple, robust, and can be adjusted mechanically (rather than requiring a software interface) to implement the design's sequence logic. An additional feature of this approach is that the cylinders are controlled by feedback so they do not reach their mechanical travel limits (i.e. "bottom out") during normal operation; this minimizes hydraulic power consumption and eliminates unnecessary mechanical stresses on the machine and power cube.

In this approach, there is only one sensor for each cylinder, and it is activated three times over the stroke. The text below is incorrect and needs correction; there are only two transitions over the stroke. See explanation at CEB_Press/Manufacturing_Instructions/Mount_Solenoid_Valve_Set_And_Controller_Box#2_Mount_Sensors_and_Magnets This is shown as "sensor zone 1", sensor zone 2", and "sensor zone 3" in the cycle illustration above. There is therefore an ambiguity in the sensor output itself: it is impossible to tell which zone is occupied when the sensor signal activates. However, within the operational cycle of the machine, the ambiguity is resolved. For example, when lowering the main cylinder after brick ejection, it is clear that the sensor will first be active in zone3, then inactive, then active in zone 2, then inactive, and finally complete the stroke at zone 1.

The hardware implementation of the sensor is with a stationary Hall-effect device and three magnets on the moving part. The sensor electrical output varies from (TBD) to (TBD) volts as the magnet passes by, and whenever the signal is greater than a threshold of (TBD) volts it is considered "active". Typically each sensor zone is approximately 1 inch (TBD?) wide. Overall, this should be a maintenance-free device: it is a non-contact technique that has no wearing parts and the electrical components are completely encapsulated.

Alternative sensor implementations are possible, and will be compatible with the controller if they provide a signal which is greater than threshold in each of the sensing zones and less than threshold in between.

There are three hydraulic circuits, as described at Hydraulic Design, with five solenoid coils:

These are 12V DC solenoid coils, controlled by MOSFET drivers on the CEB interface board.

The controller does not require any externally accessible operator controls for normal operation.

The interface board includes a reset switch, which is useful during setup and diagnostics.

The controller does not require any external operator indicators during normal operation.

The interface board provides 7 LEDs which are useful during setup and diagnostics:

The controller is implemented using an embedded microcontroller executing a small program which executes the sequence logic.

The selected microcontroller is an Atmel AVR type on the Arduino Duemilanove circuit board.

The CEB interface board plugs directly to the Arduino controller through 0.1-inch pin headers.