A basic cement mixer, for pouring slabs for smaller foundations, is an excellent place to start.

A drum on a frame, with a lever that rotates the drum 180 degrees, with the drum connected to two gears (or one gear with teeth that turn female parts on exterior of drum) connected to a motor, is all that is necessary to get a basic mixer running.

- UPDATE: Have pictures, will upload by 1/12/13. However due to having AutoCAD will now be going at it a better way! Still looking to acquire parts, welder, etc in the allotted time frame, but instead of having acquired parts by 2/12 will be researching materials and working in AutoCAD. Thanks Aidan!!!! Pretty excited about the next few months! 1/13/13- Still getting used to AutoCAD, in need of a welder.

That all being said, I will upload pictures of jobs accordingly to show that a small mixer does any size job, you just cant kill the mixer with too much stuff (you must add it accordingly in a decent ratio to water, and you must ALWAYS CLEAN THE MIXER AFTER USE).

"To optimize the ability to produce concrete on a small scale, a self-loading mixer with weight-batching of ingredients is desirable."

This covers the design for the concrete mixer with batching hopper. The document says "proprietary/confidential" on it, referring to the combination of the weighing system with the batch loading hopper, but I'll happily open-source it now:

The tilting batch hopper goes back at least to the 40s in Australia, via Lightburn (biggest Aus. manufacturer of portable mixers) and BritStand (British Standard, also Australia). It was developed as a simplified way to obtain the advantages of machines with power-operated loading hoppers, such as the following: 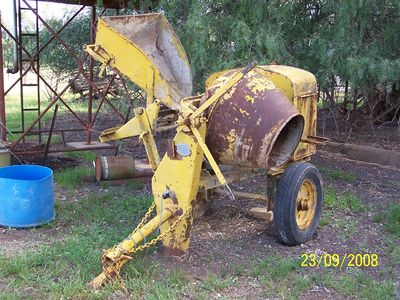 That one is still made in India (there are a number of manufacturers in India with equivalent products), and is almost an exact copy of the highly popular Jaeger 4-S machine from the 1920s in the US, right down to the "flat spots" on the bottom of the mixing drum (a Jaeger patented feature of their drums at the time).

The weigh-batching feature on portable mixers goes back at least to Benford (UK) in the 1960s, superseded by Winget (UK) who produce the most advanced machines of this type.

(Middle photo is a hydraulic version of the self-loading tilting-drum mixer; bottom photo is the self-loading horizontal reversing-drum mixer with the weighing device, a splendid piece of equipment but at a cost of about $50k. Both have automatic measuring water tanks. Go here for larger photos on their homepage that cycle between the various machines.)

My innovation here consists of:
a) adding a load cell under a hand-operated batch hopper, and
b) an outboard system for measuring water, and then
c) a microprocessor-controlled totalizer to get the ingredient weights correct.


To turn this into a design that can be built, I think will require empirical testing to determine what kind of mountings are necessary a) for the load cell to work accurately, and b) to prevent the weight of the load in the batch hopper from unbalancing the mixer on the ground. Lightburn and BritStand got the tilting batch hopper to work with a standard mixer mounting, subtly modified to offset the drum & frame slightly to the right (as seen in the photo) relative to its position on a normal mixer without the loading hopper. The CAD work can come up with a blueprint but it should still be built & tested empirically.

Note, the mixer drum discharge levers (two levers acting together) shown on the machine BritStand photo are per Australian standards; in the US & elsewhere, a single lever or a wheel & gear assembly is used.

These things could be built in various sizes. For concrete batch size of 2 cubic feet and above, 2-wheeled concrete carts would be needed, for example the Gar-Bro unit (these are still being made, and are made in the US). 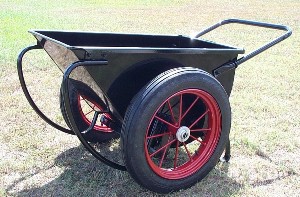 I would suggest the following:
a) Build a sub-frame with its own feet (to handle the weight distribution issue) for permanent attachment (by welding onto the mixer frame) with Stone and equivalent contractor's grade mixers, or
b) build a self-contained portable frame that could be bolted or clamped onto smaller mixers such as the common Gilson or Red Lion mixers (the ones that use A-frames at each end of the drum (when seen from the end) as the mounting for the unit).

The above is one entire design approach for weigh-batching. Another is the "micro-batcher" system I've designed, which is in another set of documents that are in AppleWorks .cwk format, and need to be converted to PDFs, and editing is needed in the texts to do a complete job of it.