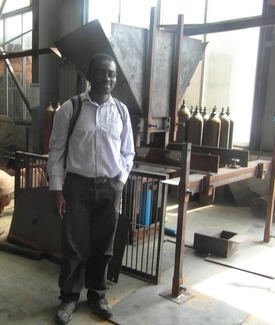 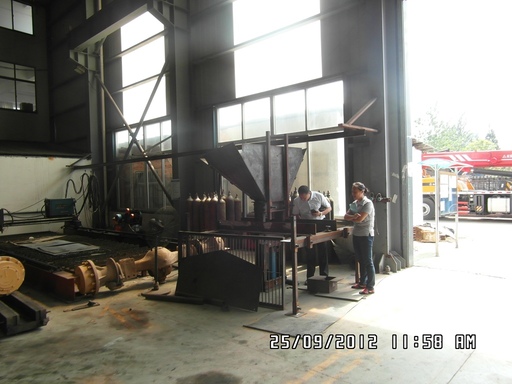 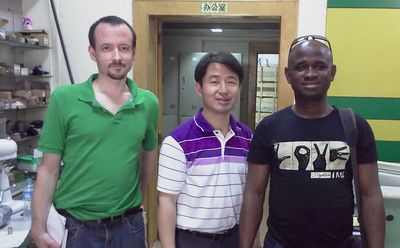 From William Neal, left in picture above:

Here are a few details of the background leading up to this replication effort:

When I saw the TED talk in March of 2011, I was immediately taken by the approach and vision of the OSE and applied for a dedicated project visit which I completed on July 31st of 2011. I returned to London Ontario inspired by what I saw and determined to carry through with a replication of the CEB Press in August. We sourced materials, identified a welder, secured shop space and put together a financial plan before other realities intervened: work. My position as a Vice Principal was simply too taxing and volatile to permit productive work on OSE projects. I ended up taking a different job at a different school as a teacher which, in the short term, took even more of my free time but, over the course of the year, allowed for unforeseen beneficial circumstances to arise.

My OSE activities went dormant for several months as I found that much of the footage that I took at FeF was not useful (I missed the bulk of the CEB building due to delays and the design was changing rapidly before my eyes, rendering other footage obsolete!) and I learned the particulars of my new job. In March, out of the Blue, the administration of my new school asked me to travel to China for ten weeks. Meanwhile, determined to continue learning about Open Source hardware, I had just acquired the parts for a RepRap, a 3D printer also on the GVCS 50 list but with much safer and modest fabrication requirements. I took the RepRap parts to China with me and began working on that when my colleague, Tony Mensah, noticed it. He was fascinated by the idea of the 3D printer and asked to learn more about it whereupon I told him the story of the OSE and my visit to FeF. When he heard about the CEB press, Tony, originally from Ghana, became quite excited about it as he saw great potential for its immediate use in his home country. Much to my surprise, he stated that we should build a CEB press right away! When I realized that he was serious, I drew up a plan for completing this project in the remaining several weeks of my stay in China (see link). The first order of business would be to completely redesign the CEB Press to metric specifications.

At first, we hoped to source the parts and bring them to a small metal shop near Tony's house and pay a welder to fabricate them. When we visited Mr. Lu at his metal supply business, that plan quickly changed. Mr. Lu became very interested in our order of metal and asked for more details. We showed him some pictures of the CEB press (video doesn't cross the Great Firewall of China that easily) and agreed to help us. On the first weekend, he brought us to the Steel Yards of Nanjing and showed us more steel than I have ever seen in my life. We clearly had our steel sourced. It was the next weekend that we realized that we had a communication issue. We arrived at his shop, hoping to pick up the steel. Instead, he asked us to get in his car. After about 90 minutes of driving, we arrived in Ma'anshan, an industrial city in Anhui province and he pulled up at a factory! Evidently, he thought that we were looking into mass production! We worked through this misunderstanding and, in the end, had the factory build the Press.

The electronics and hydraulics were sourced in the subsequent weekends. We inquired about shipping these parts to the USA and found that it would not be cost effective. In fact, a Chinese-sourced CEB would likely only be cost effective under mass manufacturing conditions as the total cost is within about US$200 of the American version.

During the course of the project, we received a lot of help and support from numerous individuals. Most notable among these are the following: -Mark Amo-Boateng, a friend of Tony's who joined us as a full partner in the project. -James Slade who provided photos of a new design for the Press Foot and additional video footage -James Wise who provided support for a custom build of the solenoid driver board. -Adam Messer who contributed significantly to the metric redesign of the CEB -Jacopo Amistani Guarda who contributed some CAD drawings of the CEB

We are not finished the project as the machine now needs to be tested. Any suggestions or support in this regard would be appreciated.

The project has undergone several delays as Tony has moved to Chengdu and William has returned to Canada. Further financing is also required to complete the testing phase. This is expected to happen soon. 'Soon' apparently takes on an interesting meaning in connection with Open Hardware Projects. Further photos and video will be posted when they become available.

..Do tell more. Who are the Africans?

Tony Mensah is a professor (newly hired) at a university in Chengdu, Sichuan, China. He was teaching business at the same school I visited for two and a half months in Zhenjiang, China. Having earned an MBA in England, Tony has in interest in development work, particularly in his native Ghana. Prior to his involvement with the OSE, he had already begun the process of setting up an NGO. He hopes to travel to Ghana with the CEB Press and initiate some development work that empowers the people at the level of habitation.

Mark Amo Boateng, originally from Ghana, is a PhD candidate at a university in Nanjing, China, a friend of Tony's who up until recently worked only a five minute walk from Tony's apartment. He has an interest in technological inventions and had been working on several agriculture and energy projects before joining our project in June.

...What brought you to China? My trip to China was a result of a few circumstances lining up. I switched jobs last year after returning from FeF, trying to reduce my overall work load to allow for more focus on OSE matters. My new school, based in China with a campus in my city, definitely allowed for a reduced work after several months of adjustment. I was sent to China in April to recruit new students and visit thirty students who had already signed up for our school. I had no immediate intention of getting involved in a CEB build; when Tony Mensah saw the RepRap under construction in my room, however, his curiosity and enthusiasm led to a discussion about the OSE and to our ambitious metric CEB project.

From Mark Amo-Boateng, project collaborator based in Nanjing, China:

"...I was in Ma'anshan as scheduled. The main frame of the CEB Press had been erected. However, we realized the engineers had some technical challenges. Most of the challenges can be attributed to the conversion of the units to from inches to mm. The hammer component of the press was missing; and was also missing in the drawings which the engineers received, so they had no idea of it. They could not also understand the functionality of the press, thus the secondary hydraulic arm was not yet installed (as they claimed the drawings they received did not specify the exact location). I will be sending the pictures we took at the place. We agreed to communicate online to resolve these issues on dimensions and after they resolved, we will go back and spend about 3 days fabricating it together with them.

I went online and I realized a complete CAD drawings of the CEB Press is available. I will study it in the next few days and communicate with them, and to get to know the actual dimensional challenges they having, then I will get their responses to you guys so you can help us figure it out. "

Recently, as per the September 27 update, Mark Amo-Boateng visited our host manufacturing facility in Ma'anshan, Anhui to coordinate efforts to build the Metric CEB press. Today, he has shared the first photgraphs of the completed steel components.

In June, 2013, Tony, Mark and Mr. Lu managed to get together in Ma'anshan at the factory to test the CEB press. The tests were successful and we are glad to present raw footage of the Metric CEB press in action 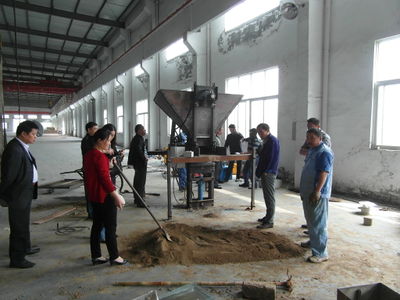 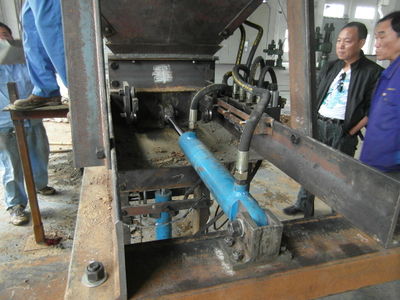 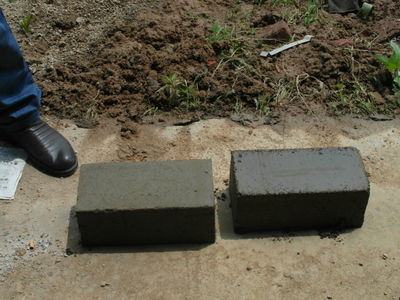 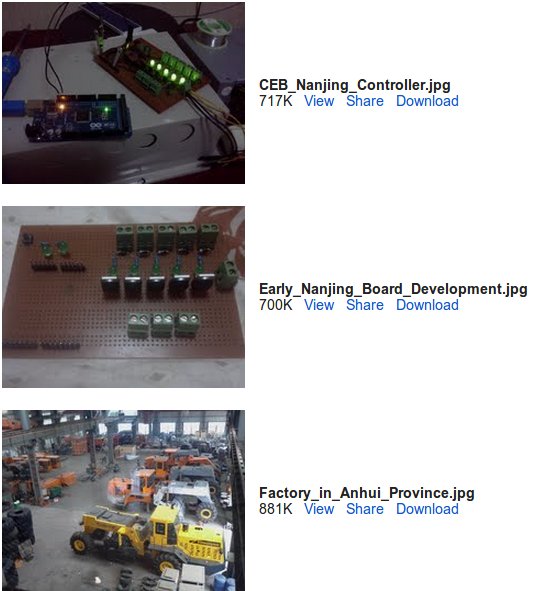