Finished the design for the solenoid operated gas cutting torch to be used with the CNC torch table. The speced solenoid valves are from ASCO; only by calling a distributor directly with the number can you order this specific oxygen rated valve, which is factory cleaned to be grease free. You won't find it online.

Something to note about the torch head; it needs to be a three hose type similar to the Victor MT-300 series or the Victor MT-200 series which can easily be modified to become a three hose torch. A two hose torch like the picture I took earlier in the week will not work because it cannot be safely modified for use with a solenoid. It appears the torch on the current prototype is like a MT-200 and could be used. 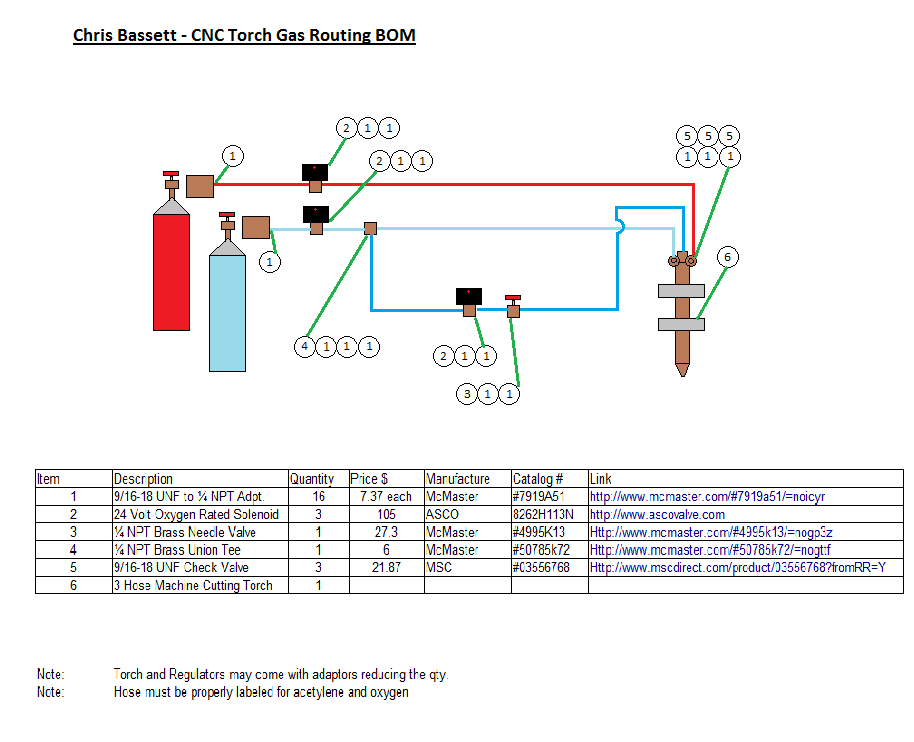 Here is a downloadable Spreadsheet of the BOM you see in the picture, has the links in it File:BOM for torch.ods

1)You see two solenoids off the tank. This is to be used with the electronic ignition, ie open the flow with the "electric sparker" firing and have that all happen quickly. This would allow for a "set it and forget it" tuning of the neutral flame. If a electronic ignition is not use, these could be omitted and the torch lit with a striker.

2)I left the neutral flame tuning valves on the torch, as most torches come with them. This would save money and tuning the flame is really not much of a bother. If one wanted to tune from a central control station, 2 more of the needles valves could be placed before the torch, or perhaps the valves could be removed from the torch head and relocated upstream.

3)Other possibilities seen have been using hand-held two hose cutting torches, and using an air cylinder to work the cutting handle. Removing the need for compressed air, to me, personally, seems an advantage in creating a similar system. Ie, we already have ample electricity. 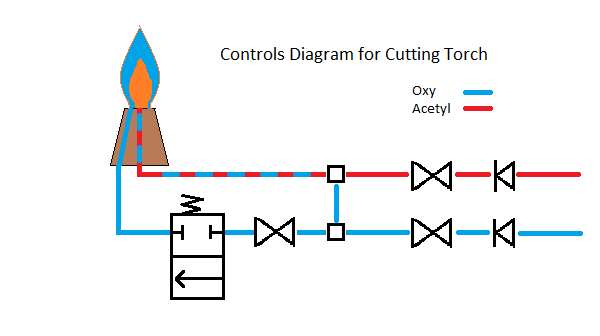 Oxygen Feed Solenoid: Got solenoid voltage from Paul Log. Actuation will be 24 volts coming from the heater circuit of the RAMPS board. Will need to check the current draw...

Torch Head Mounting: The end improvements from the first design should be getting the flow controls off the moving gantry. Inspection of torch head shows 1/2 NPT threads for a victor brand torch head cutting nozzle. However, the internal routing of gas flows means that the cutting nozzle cannot connect to any old manifold. Dissembling the rest of the torch, all internal connections are standard NPT sizes 1/8, 1/4, 1,2; so it looks like the a torch head can be disassembled to move the injection and mixing stages. 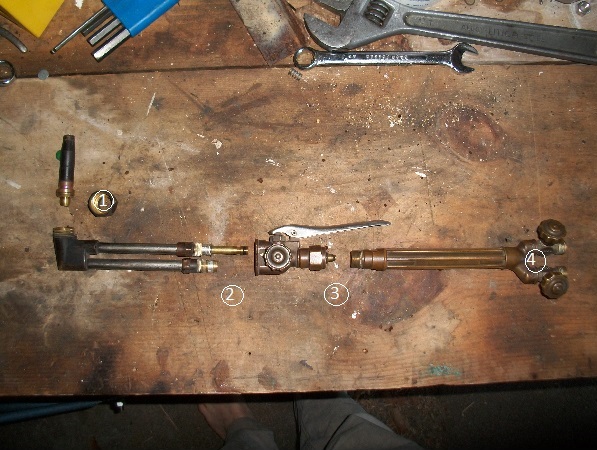 If a torch like this is used, the manifold between 1 & 2 could be easily connected to a "dummy connector" and bolted to the gantry.

Learned out to work GIT HUB to access file repositories. Need to download application. A tutorial can be found here: https://help.github.com/articles/fork-a-repo

The application can be found here: https://help.github.com/articles/set-up-git

Checked that the solid works file loaded - successful. Will review in detail later

Researched Prior Work. Will build upon prior torch mounting systems of hose clamps holding a modified torch head. Learned the stepper motors move the gantry using rack and pinions.

The prior flying gantry used two rails in parallel to stabilize rotation. From the model, v2 of the Torch the flying gantry will slide on one rail so some suitable bracking will need to happen. 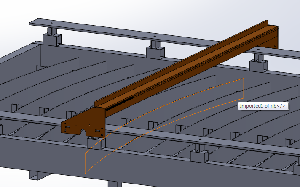 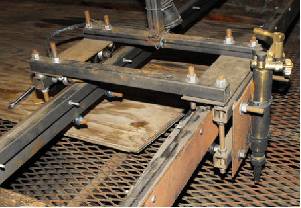 Standards for oxy-acetylene systems: Threading is 1/4 NPT, LH threading for acetylene connections. Valves should be "grease-less" for prevention of combustible contaminants