The PCB is intented to be used with a Combined Cycle System , consisting of

Here's how it works:

The printed circuit board automatically stops the internal combustion engine upon having the oil reach a certain temperature (say 100°C). With a gasoline engine, the stopping can be done by having the PCB preventing the spark plugs of operating (meaning the spark plug battery needs to be deactivated, or the magneto -if it uses a magneto instead of a battery). The Stirling engine can then be automatically switched on by the printed circuit board by opening an electric valve. Then, after a while, when the oil temperature has dropped considerably and is no longer able to run the alternator, the printed circuit board closes the electric valve to the Stirling engine and starts the internal combustion engine again. See the schematic of this here below: 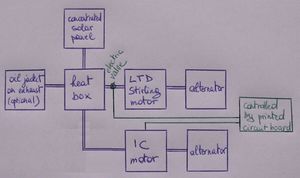 Placement of the PCB in the combined cycle system (the patented version, using air-cooled IC engine)

The image below shows a similar setup for when a the Stirling motor is connected, not unto piping attached on the oil filter, but on the radiator of the IC motor (obviously this is only done with water-cooled IC motors, not air-cooled IC motors). 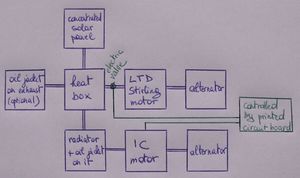 Placement of the PCB in the combined cycle system (the patented version, using water-cooled IC engine)

Make sure that if building an open-source combined cycle system using this printed circuit board, you don't violate patent number 692/MUM/2013: COMBINED CYCLE SYSTEM TRANSFERRING THE WASTE HEAT BETWEEN THE ENGINES, DIRECTLY FROM THE ENGINE(S) OR VIA THE COOLANT WATER OF THE ENGINE(S), BY MEANS OF A LIQUID (for example by using a centralised heat box, ...) If you do want to build it by integrating a centralised heat box, ... you will need to ask permission and contact the owner of the patent, to build it under a license.