What of using non metal containers? I've seen bags and balloons used for storage. As well, there are carbon fiber storage tanks as well. --Dennis 11:18, 13 March 2009 (UTC)
Hydrogen is corrosive to steel only because it reacts with residual carbon atoms. The corrosion problem is solved by using very low-carbon steel. This is of course structurally weaker and so must be complemented with an outer shell of regular steel. This idea was what led to the breakthrough in the Haber-Bosch process, fixing nitrogen from air using hydrogen. Of course, non-metal liners can also do this trick --Rasmus 11:01, 18 January 2010 (UTC) 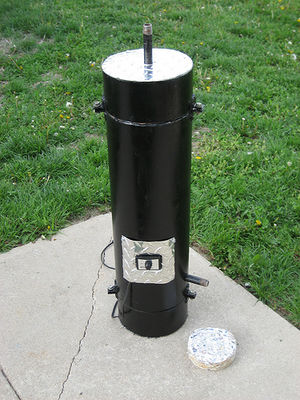 Through the work of a team of 4 senior mechanical engineers at the University of Missouri, the basic design found below was finished for a Personal Biomass Gasification Chamber. The team has finished the final report. The information found below was ported to the Wiki format from that report. All of the research is completely open. Also, it is highly encouraged that people update and correct mistakes since this project is far from perfect.

Currently we are testing to ensure that the correct amount of oxygen is being introduced into the system. This is to ensure that we are actually getting CO gas as a byproduct.

The most popular gasifier design for personal use is the downdraft gasifier. There are many good reasons for this:

Biomass gasification technology is a concept that has been around for over 100 years. Simply put, biomass gasification takes a dry, carbon-based fuel and converts it into a usable synthesis gas, or syngas, that can be be used for various processes such as cooking or manufacturing. This technology is now back in demand due to several factors. One of the prominent reasons biomass gasification is becoming important again is rising gas prices as well as United States dependence on foreign oil. These topics are now at the forefront of many American’s minds. A personal biomass gasification chamber would give consumers an inexpensive alternative to expensive natural gas that now dominates the market. The effects of such a technology could have extensive implications on the economics of the oil markets, as well as the ability of people around the world to locally produce their own fuel.

Similarly, this chamber would be using renewable energy because it is based on the gasification of biomass. Biomass is a broad term that essentially means any sort of carbon based material that can be used as fuel. In our case, we would be using biomass logs that would be gasified in the chamber. This process is much more environmental-friendly than simply burning the biomass because the gasification process has significantly less emissions. Also, the ash byproduct can be used as fertilizer for plants and crops. Charcoal production can be enacted also, as long as the correct conditions are held within the chamber. Similarly, reducing the use of fossil fuels is extremely important as issues of global warming seem to be cropping up everywhere. Since biomass is renewable it would eliminate the need to drill for fossil fuels, something that would significantly reduce the amount of greenhouse gases (GHGs) that are created by humans.

Throughout the world, energy is becoming one of the most important issues in all facets of life. Be it political, social, economical or simply survival, the problems that the human race now face due to the limited supply of fossil fuel becomes more evident every day. The following paper will discuss the reasoning and need behind the research, design and building of a personal biomass gasification chamber, and the potential it holds for energy usage by persons around the world. Included in this paper are the design principals, schedule for completing review, research, engineering analysis and other related topics that went into our research process. This personal gasification chamber could be used in rural areas where biomass is abundant and logs could be made from agricultural waste as a byproduct of crops. This would make these logs very inexpensive to produce and gasify on sight and produce cost efficient energy. Similarly, reducing the use of fossil fuels is extremely important as issues of global warming seem to be cropping up everywhere. Since biomass is renewable it would eliminate the need to drill for fossil fuels, something that would significantly reduce the amount of greenhouse gases that are created by humans. Biomass is CO2 neutral and thus immune to this problem.

Through market research we were able to determine what gasifiers were currently being used today. Some of these gasifiers can be seen in Appendix C.

As can be seen, these gasifiers are usually very large and expensive. The only gasifier that is small does not capture the outputted syngas.

Below is a list of links that were utilized in the above design. There is especially useful information found in the Research/Papers section.