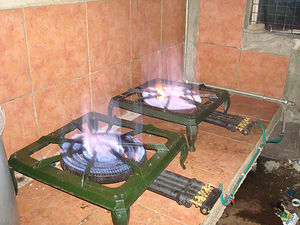 A gas produced by the breakdown of organic matter in the absence of oxygen. 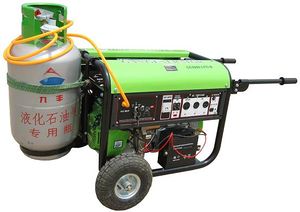 A sealed container that carries out the anaerobic digestion process. It needs to be able to separate and remove the liquid and gas phases and have an entrance/exit for the substrate. Sometimes heated and stir the content to produce even more. Some new digesters have a step before the liquid is exiting the digester there it is heated up to 70 degree Celsius to remove some more of possible pathogens that could have survived.

Biogas needs cleaning or upgrading to remove as much as possible of the contained sulfur and or carbon dioxide and reach a higher energy value (see Appropedia: Biogas hydrogen sulfide scrubbing project and Biogas CO2 scrubbing project). The scrubbed carbon dioxide can be fed into a greenhouse for CO2 Enrichment. Upgrading is also necessary to be able to use biogas in engines for mobile gas-car transportation or electrical generation and limit corrosion and wear in motors. 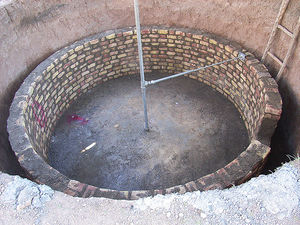 Construction of underground digester with bricks. This is common in rural India and China

Supergas - In 1996-97 Superflex collaborated with biogas engineer Jan Mallan to construct a simple, portable biogas unit that can produce sufficient gas for the cooking and lighting needs of an African family. The system has been adapted to meet the efficiency and style demands of a modern African consumer. It is intended to match the needs and economic resources that we believe exist in small-scale economies. The orange biogas plant produces biogas from organic materials, such as human and animal stools. For a modest sum, a family will be able to buy such a biogas system and achieve self-sufficiency in energy. The plant produces approx. 3-4 cubic meters of gas per day of the dung from 2-3 cattle. This is enough for a family of 8-10 members for cooking purposes and to run one gas lamp in the evening.