Hint: Have you seen 3D Printer Manual? That should be the authoritative guide. Please add notes there on what is missing.

This edition of the D3D was made in the town of Sittard, the Netherlands in a pilot project for a course for STEAM teachers. We intend to spread OSE as an educational context to schools in the region, starting with this printer. Everybody who graduates as a STEAM teacher will be able to build one. While building this printer we found that the notes on the D3D_Australia were very useful, so we will make a similar log here, hoping to be of use to other people trying to build this printer. 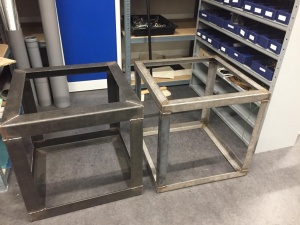 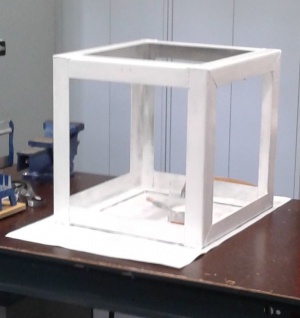 The frame was made using cold rolled steel L-profile instead of sheet metal. We had them made in metal workshop of a school we know and they had these profiles lying around. We somehow missed the exact dimensions of the frame, so our frames are (quite) a bit bigger. Fortunately the design is scaleable. For now we are sticking to one axis in the Z direction, but we are hoping to extend to two once we have the printer working.

The paint was chosen by students. Maybe I will add a few silver swirls or a zebra print to it later. 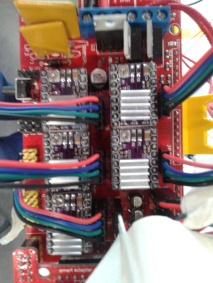 This wiring worked for us

If your stepper does this when you ask for it through pronterface, you've probably wired it correctly

At first none of the axes worked. We found it is quite easy to troubleshoot if you just connect a loose stepper to the relevant driver and see if you can get it moving through pronterface. The D3D Controller page says it is essential to rewire the stepper cables. For us this somehow didn't work, so we had to rewire the cables back to their original configuration. Steppers are stepping now, though sometimes in the wrong direction. Hoping to fix that in the firmware. 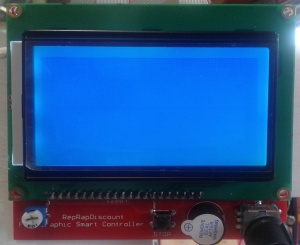 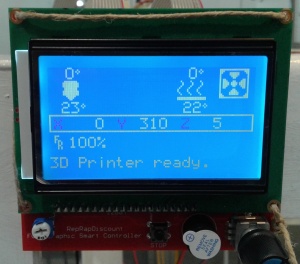 At random occasions the printbed just crashes down. Somehow the Z-stepper switches off. It's pretty unsettling, because the bed banging down might generate some pretty nasty induction currents to the driver.

We considered it being the stepper driver overheating, but the temperature isn't that high. We can even touch the heatsinks on the drivers and they are just comfortably warm.

In Marlin "#define DISABLE_Z" is set to false. So that can't be it either.

After weeks of firmware tweaking, measuring temperatures on heatsinks and current through steppers, we discovered the pulley wasn't properly attached and cried some more blood. I can't think of anything lamer that might halt the construction of a machine, but things never hang on anything sophisticated. It's always something stupid like the name of a display, a comma in your arduino code or an untightened bolt. I don't think it is possible to come up with a build instruction that can help with such lame mistakes. You either need somebody with a bit of experience to remind you of the lamest possible mistake or an elaborate video of the build process. I think OSE could achieve viral replicability with something in the order of 6 hours of footage of somebody building the D3D with only the coffee breaks cut out. Yes this makes for boring viewing, but people building the D3D can just skip to the part of the video that is relevant to them, such as somebody tightening bolts.

Since we are hoping to build a second z-axis and maybe replace the bed with something larger, we didn't feel like gluing the heated bed to some rods. So we improvised the following bed holder with some M3 bolts an nuts, aluminium rods and springs from ballpoint pens that you find lying around classrooms at the end of the day. We expect heat loss to be a lot less than in the original design. Oh, and we can level the bed to compensate for bending rods under the weight of the bed. Just turn the bolts. 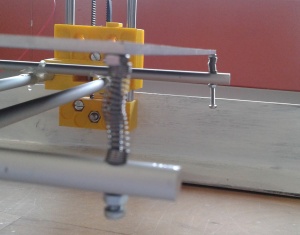 We are based in a school that obliges the use of MS Windows, so we are using the windows version of Cura. Here it is impossible to import the configuration profile. But that's nothing a little tweaking can't help. 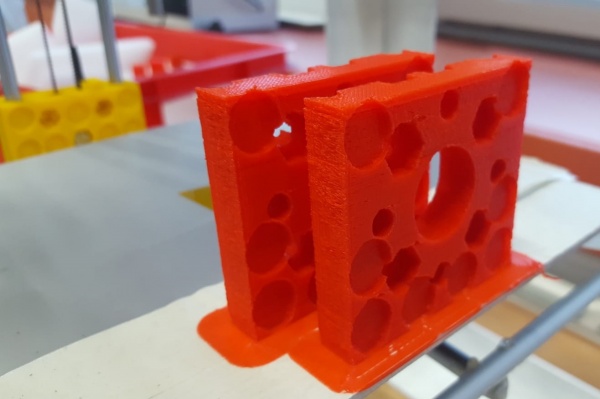 Printer is working fine and printing it's own parts. We will add a second Z-axis, cable guide and a more stable bed mount in the next few weeks. If you are in the region and you want to build one of these, feel free to contact Fontys Lerarenopleiding Sittard. We would be especially happy to work with schools to make education out of OSE.
Retrieved from "https://wiki.opensourceecology.org/index.php?title=D3D_@_Fontys_Sittard&oldid=193229"
Category: