Hint: It takes $7.5T to go solar with PV, for 100% of energy use. 30TW would need to be installed in total (and 300TWhr Battery Storage). World now has about 1 TW (2022). Size of carbon credits is about $1T, so carbon credits can be put to PV instead. A good strategy would be to do exactly this: use that revenue to fund PV installs. But how does this work? Is this even worth it? Or, just install PV for customers to get off dinosaur crack? 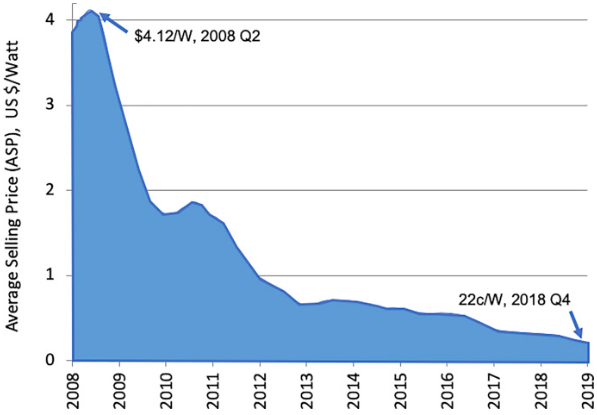 Below, we motivate the solar economy transition on first principles, and propose a million PV entrepreneurs worldwide to transition the world to a solar economy by distributed PV panel production.

This would require other, simpler means to producing silicon. There is ongoing research into alternate routes for silicon production, see review [3]. But, silicon can also be produced with traditional means, in a bootstrapping approach, even if energy payback times are 2 years. But the article points out that the cost would be 7x higher if Chinese solar-grade silicon subsidies did not exist? And mentions billion dollar costs of solar grade silicon refining operations? Perfect place for open source zone refining. But, upgraded metallurgical grade silicon - is another more clean process.

Metallurgical grade silicon costs only 14-16kWhr/kg in energy to produce -- [4]. This energy requirement is much less electrolytic hydrogen, see Hydrogen Production. For comparison, Solar Concrete is only about 1 kWhr/kg.

For perspective - note that 1 kg of silicon (when transformed to PV cells) - can produce the equivalent energy of 100 tons of oil [5] (fact check this by doing the calculation).

Metallurgical grade silicon can be used to make solar cells - [6]. This appears to be 2008.

Upgrading metallurgical grade silicon to solar grade seems to be the future. Appears to have a 1/2 year energy payback time [15], making the panel production stage more energy intensive than the production of the cells themselves!

What I'm observing is that almost nobody - other than perhaps Elon Musk - is thinking clearly about the situation we are in. Allow me to explain.

Each dollar in the global economy emits (on average) 260 grams of CO2. If we spent $8000 each per year, we would have sustainability.