When using a CNC machine, there needs to be a program which sends the gcode created on a computer, to the motor controller which executes the gcode by moving around the motors.

An alternative G-Code Sender to UGS (below). Suitable for running on low spec gear (eg on Raspberry Pi3), as well as standard desktop/laptop usage.

Printrun is a gcode sender that's supposed to have good support for RAMPS.

In Oct 2013, Dan used it for manual control and entering gcodes, but couldn't get it to send a file.

Seems not to have support for marlin.

In Oct 2013, Dan couldn't get it to run gcode files although it's got some nice manual control features.

This is recommended for grbl. As of Oct 2013, it's supposed to have imperfect support for Marlin. 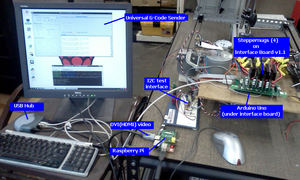 Raspberry Pi with grbl and steppernug

RaspberryPi is a very small, low-cost, single-board open-source computer. Although Universal G-code Sender is distributed as a self-contained "One-jar" package that handles its own dependencies, it needs a little help on the arm-linux platform. I believe it misidentifies arm-linux as intel-linux and tries to use an x86 communications driver. Therefore we need to provide our own version of the communications library and manually unpack Universal G-code Sender.

These instructions were developed on a Raspbian Wheezy installation downloaded from [1]. Here is the OS identification:

Note I installed openjdk-7-jdk, but I don't think it's necessary; the jre should be adequate.

To make the Arduino Uno comm port (ttyACM0) visible, you need to start the application with a command-line parameter

Be patient, it takes about 20 seconds to start the application. 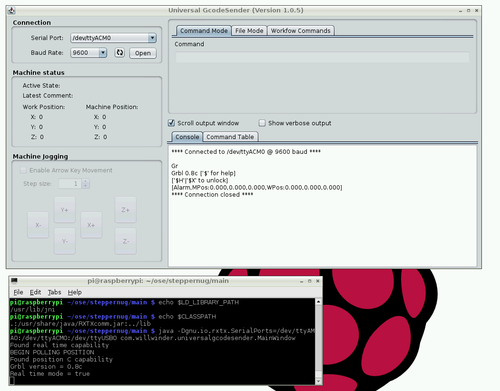 For minimum-cost implementation of CNC, it would be nice if the g-code sender interface could run from the composite TV-out of the Raspberry Pi (assuming an old TV may be cheaper than an HDMI/DVI monitor). Unfortunately, however, the UI doesn't fit: 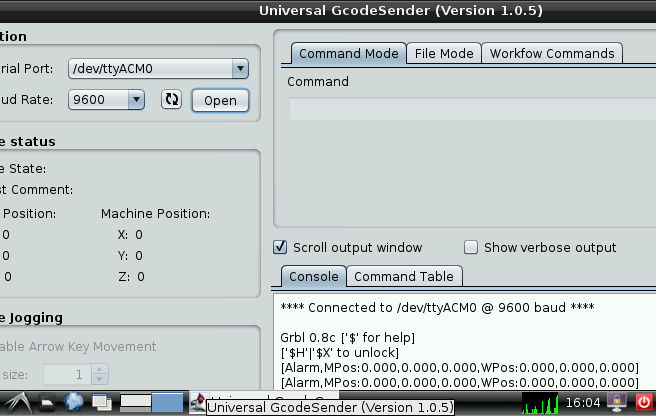 Other options for gcode streaming here.