The vast majority of minerals on the earth's surface exist as alumino-silicate crystals (for example: clays, feldspars, quartz). By dissolving these and then allowing them to recondense, materials with longer range crystalline structure than its components may be formed.

The most basic inorganic polymerization process uses abundant kaolin clays and silica-rich wastes to make a strong cement. A solution of simple aluminosilicates dissolved in an alkali solution acts as a binder, polycondensing upon dehydrolization into a microcrystaline structure which spans the space between silica-rich particles. With little technology and at low temperatures, bricks and cements many times stronger than Portland cement are produced. With more intensive technology (artificial atmospheres, high pressures, controlled temperatures) and at hundreds to thousands of degrees Celsius, much more structured polymers can be produced which will never combust at any temperature (due to a lack of carbon to react with oxygen), and which also have very low thermal expansion coefficients (currently being explored for long-term storage of spent nuclear fuel).

Currently, much of this research is closed source and proprietary. Room temperature setting cements, refractory mineral foams and non-combustible panels for airplanes are amongst the products being researched, and possibly already being widely produced. As the field progresses, more advanced geopolymers and geopolymerizing processes will likely emerge.

The Geopolymer Institute has many useful technical papers on the subject, and has also released several collections of papers from "geopolymere" conferences in France. 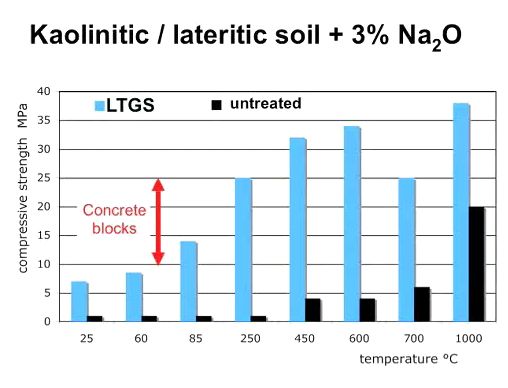 Caveat: there is a requirement of about 2% stabilizer (base salts) for this to happen.

This may be a low-energy, strong brick technology that is also totally decentralizable in production, and may be widely accessible on many continents.

The making of alkaline solution, 12 hr before mixing, slowly! dissolve 320gm sodium hydroxide (pure lye, as in a "drain cleaner") into a liter of water. This should be stirred in slowly, with care, wearing gloves and goggles as it is very caustic. This mix will generate some heat while dissolving.

Here is a Dr. Michel Barsoum’s formula for a man-made limestone. To a high pH water, add limestone powder, diatomaceous earth and a very small amount of lime. Form and cure at 90 degrees Centigrade. This yielded a stone with a compressive strength > 20MPa and able to withstand 2 months of submersion in water. He stressed that the one of the keys to geopolymerization is the rapid dissolution of silica and that this is best achieved using diatomaceous earth as a silica source, not clay. Because natural earth materials vary, unlike standardized commercial products, the formulae and properties of the final polymerized stone building products may vary greatly from region to region. (Link below.)

Some have described geopolymer as a man-made zeolite; some as man-made limestone. It could also be likened to a man-made soil duripan, especially if volcanic ash is used as a amorphous silica source. Clearly, a range of local natural earth materials can be successfully used, but a period of formula testing is necessary.