The wind turbine is in the research phase of product development, we are focusing on the TiVA-System right now.

We are developing an open source wind turbine with an agile open collaboration.

TiVA and wind turbine specifications started with a joint development venture between etemu.com and Apollo-NG. All information is released open source and for free, for a better world and for the fun of open collaboration. (CC BY-SA)

Research and development is currently concentrated onto TiVA, a tiny wind turbine prototyping platform. With this very small turbine, we can easily change parts, try out new ideas and increase the quality of the design on a small scale in a fast and inexpensive way. Please have a look at the TiVA page for further information.

You can help us with the following tasks:

(TODO: The following paragraph has to be translated)

The wind turbine should be loosely designed according to the OSE Core Values except points 8 and 9, which demand high performance and equal to or higher than industrial efficiency [1]

In addition to the OSE Core Values, the wind turbine should be safe to operate, e.g. have a suitable safety factor in all structural calculations, proper isolation to prevent an electric shock.

The complete assembly of rotor and mast should not be higher than 10 m. If regional communities permit higher masts, the maximum height must not exceed 20 m, to avoid national and ICAO air traffic security issues and legal obligations to carry warning lights and report about their functionality.

We won't start with a turbine greater than 4 m² due to restrictions in Europe pointed out by Detlef Schmitz. A wind surface of 4 m² equals a 2 m diameter rotor with a height of 2 m. Hint: In every wind condition, a 1 m diameter VAWT with a height of 4 m (4m²) is more efficient than a 2 m x 2 m (4 m²) VAWT due to the higher rpm and better aerodynamic figures. Industrial VAWTs aim for a large height, not for a large diameter.

We want to design a rather small VAWT, resulting in the following advantages:

The small form factor alone yields the following advantages next to being diy-friendly:

Simply said, it is more flexible to use many small turbines versus one large one. If a larger energy source is required, we connect multiple wind turbines in a local grid -> distributed energy sourcing, a 'wind farm' consisting of VAWTs: 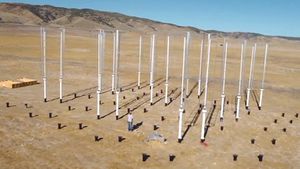 Dabiri carried out field tests in the summer of 2010 at an experimental farm known as the Field Laboratory for Optimized Wind Energy (FLOWE), which houses 24 10-meter-tall, 1.2-meter-wide VAWTs. In the field tests, which used six VAWTs, Dabiri and his colleagues measured the rotational speed and power generated by each of the turbines when placed in a number of different configurations. One turbine was kept in a fixed position for every configuration, while the others were on portable footings that allowed them to be shifted around.

They found that the aerodynamic interference between neighboring turbines was completely eliminated when all the turbines in an array were spaced four turbine diameters (roughly five meters or 16 feet) apart. In comparison, propeller-style HAWTs would need to be spaced 20 rotor diameters apart - which equates to a distance of more than one mile for the largest wind turbines currently in use - for the aerodynamic interference to be eliminated.

The six VAWTs generated from 21 to 47 watts of power per square meter of land area, while a comparably sized HAWT farm generates just two to three watts per square meter.[2]

How does the wind turbine generate energy?

where the mass is measured in kg, the velocity in m/s, and the energy is given in joules.

Air has a known density (around 1.23 kg/m³ at sea level), so the mass of air hitting our wind turbine (which sweeps a known area) each second is given by the following equation:

And therefore, the power (i.e. energy per second) in the wind hitting a wind turbine with a certain swept area is given by simply inserting the mass per second calculation into the standard kinetic energy equation given above resulting in the following vital equation:

where Power is given in Watts (i.e. joules/second), the swept area in square meters, the Air density in kilograms per cubic meter, and the Velocity in meters per second. 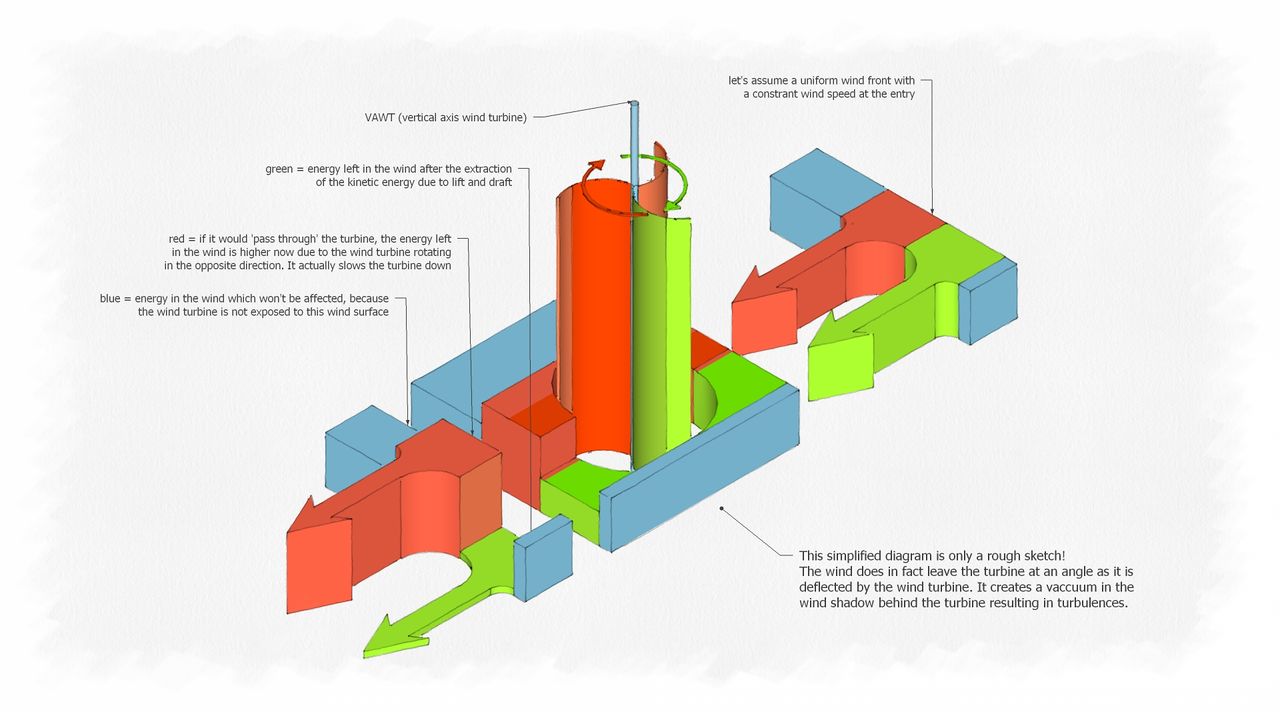 A sketched 3D ISO view of a simplified VAWT wind energy diagram. Full size view recommended. Note: Pictured is a drag-only rotor, but our intention is to design a lift-rotor, as it has a higher tip speed ratio and revolves faster. 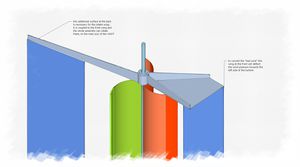 Example of an EVA wind turbine design, ISO view of the top end. Note the wing at the front and the tail rudder.[4]

The Enhanced Vertical Axis Wind Turbine idea incorporates an intake manifold at the front which is always facing the direction where the strongest wind is coming from. The main disadvantage of the VAWT against a HAWT is reduced: There is no attacking wind which will work against the natural, clockwise rotation of the VAWT. This may result in an increased overall efficiency.

Who can help with FEA + fluid dynamics and simulate the wind flow at various EVA wind turbine designs? We want to investigate what wing form the intake should have and at which angle it should be mounted. Also: Does it increase the efficiency if there's another, longer planar surface at the right of the intake parallel to the wind direction (The position where only a short, structural surface is shown in the sketches)

All calculations are made in the metric system. This is the logo for the Jamaica Metrication Board, which completed its work in 1996.

All calculations are made in the metric system. Corrections and additional approaches are always welcome.

Let's start with the base mount. As the design outlines state we won't start with a turbine greater than 4 m² due to restrictions in Europe pointed out by Detlef Schmitz. A wind surface of 4 m² equals a 2 m diameter rotor with a height of 2 m.

TODO: Leverage should be taken into account here. How to calculate the load at the bearing points?

TODO: Consider serious safety factor for robustness and against oscillations.

Maximum wind speed the turbine has to withstand:

Example for a classification in Germany, Berlin: The mean wind speed is classified above IEC class IV with an average value of 2.3 - 3.6 m/s at ground level [9] without any obstacles.

IEC classes are realistic for higher wind zones, industrial wind turbines are usually mounted at >50 m. We are safe with an IEC class IV design. The design should be build for a maximum load of <m>F ({30\frac{m}{s}) = 2160 N</m>.

Estimating the power output of the VAWT

Power available in the wind:

Power available from the turbine:

This is the estimated mechanical wind power conversion.


A tuned VAWT may have a best-case efficiency of 40%[10], while a simple drag-based turbine with no optimization nor special aerodynamics may have an efficiency of about 20%.